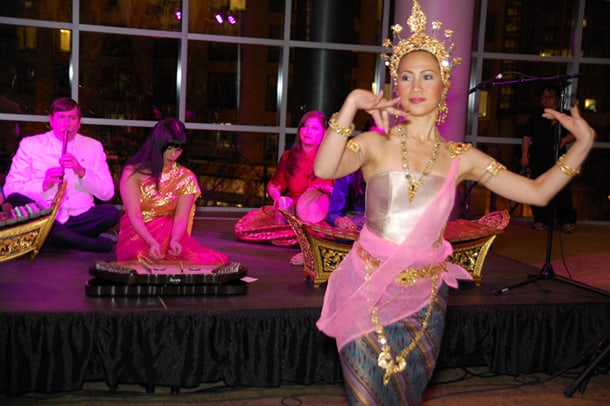 A cultural phenomenon is currently sweeping through Thailand due to the popularity of the Thai period TV drama, “Buppesannivas” (“Love Destiny”). The series, shot in places such as the ancient Thai capital of Ayutthaya, has led many Thais to don traditional attire to work, school – even the supermarket – and visit historical sites.

This new interest in ancient Thai history has flipped the script on modern Thailand’s penchant for commercialism and Western culture. The late King Rama IX, Bhumibol Adulyadej, was Western-educated and played the saxophone, which led to many Thais’ interest in Western entertainment. However, his daughter, Her Royal Highness Princess Maha Chakri Sirindhorn, loved playing Thai classical music, making it acceptable for people to appreciate the old styles – and for girls to play the instruments.

The throwback interest is fresh encouragement for the Thai Cultural Society, which for four decades now has endeavored to preserve, promote and protect the Thai culture and heritage through the performing arts.

“Our culture is good, priceless and has value,” says Pilaivan Britton, Thai Cultural Society’s founder and director. She reminds other Thais, “Don’t forget our great heritage, even when you live here and your children grow up here.”

The group fulfills an important mission among the Puget Sound Thai immigrant community by preserving and representing Thai culture – not only to Americans but to each other. It tries to bring master musicians, including the artists of Thailand, every year to inspire younger members with authentic Thai performing arts. The question remains, however, how the group will sustain its mission as members age and as second generation members grow up and move away.

The Chao Phraya, “river of kings,” flows through the capital city of Bangkok, extends in every direction, and reaches the Gulf of Thailand. It is the namesake of the Chaopraya Ensemble, the Thai Cultural Society’s first performing group which started in 1976. Britton started the Chaopraya Ensemble after the departure of Jareanchai Chonpairoj, a UW doctoral student in ethnomusicology who invited locals to learn the Thai performing arts through his group called Siam Sangkit. When Chonpairoj, who specialized in the music of Thailand’s Isaan (Northeastern) culture, finished his PhD and moved back to Thailand, Britton carried the torch. She was joined by the late Allan Swenson, whom she met 20 years earlier when Swenson was a Peace Corps volunteer in Thailand. Swenson actively performed with the Thai Cultural Society until his passing two years ago.

The Chaopraya Ensemble performs Thai classical and folk music on traditional Thai instruments and dances ranging from regional, lively folk styles to graceful, stylish court dances. In 2002, the ensemble earned a spot on King County Arts Commission’s Touring Arts Roster – achieved through the tutelage of Thaworn Sripong, one of Thailand’s master musicians on the wooden xylophone.

The Thai Cultural Society officially formed in 2001, with the intention of providing opportunity for second generation Thais to learn and maintain their ancestral culture and heritage through music and dance. Composed of 25 rotating members, depending on the season and size of shows, the Society is an evolving mass of families and new friends, united by a passion to share Thai culture through traditional and modern dance and music. The Society’s original core of close friends have observed its organic evolution into an all-encompassing representation of Thai culture across three groups.

The second group is the Bong Lang Ruam Jai Band, the house band of Washington state’s largest Thai temple in Auburn, which plays a mix of energetic village party, dance, and folk music. Made of community members – including white Americans Lee Sledd and Adam Porter – who have a passion for Southeast Asian music, the band is named after a standing xylophone (bonglang) used in the Isaan region of Thailand and performs with regional instruments like the pin (a three-stringed instrument similar to a guitar), the long drums, the khaen (a multi-chambered bamboo instrument), and various percussion instruments.

The third group, Wayside Band, formed in 2017 to play more modern pop and folk music, blending “electrical modern” instruments with traditional instruments such as the klui (flute), ranat (xylophone used in the Chaopraya Ensemble), and the kim (a stringed musical instrument derived from the Persian Santur).

At the group’s jam sessions, the older members let it be known they have health and aging issues. Just shaking hands with founding member Su Vathanaprida elicts from her a gentle reminder to be gentle, as her hand is recovering from a fracture.

At another, the group presented Chare Vathanaprida, Su’s husband, a man of many musical talents and instruments, with an 81st birthday cake. Britton herself has suffered a couple heart ailments. The group now takes a rehearsal hiatus when its retired members retreat from the bitter Seattle winter to balmy Thailand, then resumes after they’ve returned to do their April taxes.

The Thai Cultural Society does not have any paid staff. Group attire and instruments have largely been purchased out of pocket, with some support from small performance fees. Britton has been considering an application for nonprofit status, which would enable the group to apply for grants, including a capacity-building grant for the future and ideally an allowance for nonprofit consulting.

“Here in the U.S., children learn piano, violin, viola, and theater… many times they are not interested in traditional Thai culture,” Britton laments. “But we want them to have the opportunity, and we’re willing to show the Americans too.”

Britton’s daughter Teresa Snope studied with a Thai master musician as a teenager and performed with the group before moving out of state. The group welcomes new members and is willing to train. Just like Swenson, Sledd and Porter demonstrate that Thai heritage is not necessary – just genuine interest in the culture.

“We are proud of our culture, so people that join our group must subscribe to the same belief,” says Vathanaprida. “We are not out for ourselves but for the love of the arts and country.”

The Thai Cultural Society will perform at the University District Street Fair on May 19 and at Northwest Folklife on May 27. For the first time in their 17 years performing at Folklife, they will stage a Thai traditional wedding. www.thaiculturalsociety.com