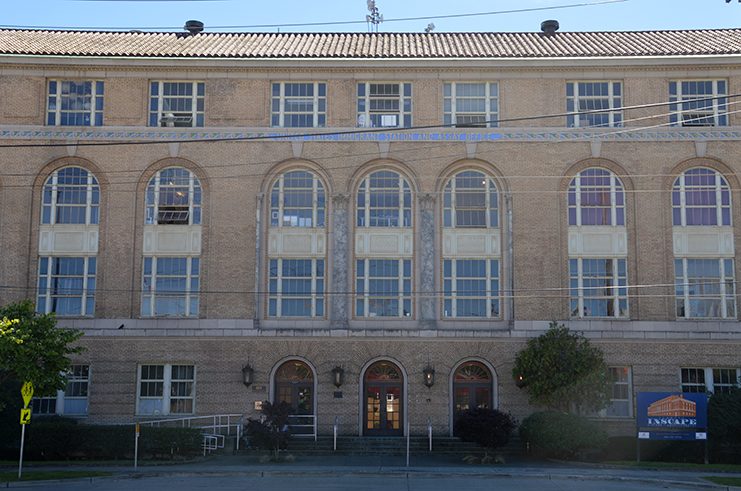 Tara Tamaribuchi was excited when she found a studio space at Inscape Arts. There was heating, walls that met the ceiling, and a community that would hold open studios. The building, on Seattle Blvd S, was also located in the Chinatown International District, a neighborhood she feels connected to.

Tamaribuchi felt immersed in the building’s history; until 2004, it was the building for the Immigration and Naturalization Service, the entry point for immigrants coming to Seattle, many of whom were detained within its walls.

Spending time in the Inscape building feels similar to visiting sites of WWII Japanese American incarceration, Tamaribuchi said — places where members of her family were incarcerated. “I feel connected to this space,” she said. “There’s just so many stories here, but it’s really unlike any art studio building. It’s very hybrid. You cannot put it in a box at all.”

In February this year, the group of investors who own the Inscape building put it on the market. In March, Tamaribuchi and other tenants organized to create Friends of Inscape, to try and acquire the building and preserve it as an affordable arts and culture space, and enhance the historic building “as a historic and cultural center.”

The group is fiscally sponsored by the Northwest Film Forum. It is working with the Cultural Space Agency, a real estate development company created by the city last year that finds potential arts and culture spaces to acquire and preserve, to prevent displacement of arts and culture. With the Cultural Space Agency’s endorsement, Friends of Inscape applied for a Strategic Investment Fund grant from the City. The group could be awarded up to $5 million dollars toward buying the building.

Friends of Inscape has met with elected officials, CID community organizations, historical groups and others. It is regularly in touch with 4 Culture, and formed a working group with the City and County to discuss how it could preserve the building.

The building was the immigration and detention and processing center for Washington state for 80 years, until 2004. Chinese immigrants detained during the Chinese Exclusion Act passed through. Japanese American community leaders rounded up after the attack on Pearl Harbor were held in the building before being send to prison camps, said Cassie Chinn, interim executive director of the Wing Luke Museum, in an email.

“It holds the stories of successive waves of immigrants and refugees,” said Chinn. “The building calls us to explore critical questions of who we are as a nation. Who belongs? And who gets to decide who belongs?”

Exhibit displays set up by the Wing Luke Museum tell the story of the building and its place in the history of immigrant communities. Remnants of detention are preserved: Barbed wire, a yellow painted line where new immigrants would wait, rooms for detention.

The building’s upper courtyards were the only place detainees could exercise and spend time in the sun. Basketball hoops and graffiti written in tar remain — names and countries of origin written in multiple scripts. Plants and artwork are there now.

A group of investors bought the building in 2008, and rented it as an artist studio building.

Marcus & Millichap, the real estate brokerage firm that listed the building, markets it as an opportunity for “a wide range of commercial and residential uses such as office, multifamily, retail, and hospitality.” The adjacent parking lot could be developed into a structure up to 170 feet, with “tremendous views of Elliott Bay, Mount Rainier, and the Downtown Seattle,” according to the listing.

The listing of the building took the tenants by surprise. “Most of us are in that building because we can’t afford space anywhere else in Seattle,” said Dan Hudson, another tenant and leader with Friends of Inscape. “Obviously none of us want to get displaced.”

Before the building was put on sale, tenants had not come together to envision the future of the building, so doing so has been “a learning curve,” said Hudson.

Friends of Inscape wants to acquire the building so it won’t fall into the hands of private developers, Hudson said. But with the help of historical groups and immigrant communities, it could also become accessible and open to the public, and showcase history through classes and events.

“This building could be more integrated into the neighborhood and actually be a community center,” Tamaribuchi said. “There are immigrants or people’s family members who have been detained here, and it’s hard for them to get access to the building to see it. I can imagine all these pilgrimages and events that could be happening here.”

Tamaribuchi has already spoken with Densho, the Japanese American Citizens League, Vanishing Seattle and others about what the space could be.

“We hope that public access to the space will continue on,” said Chinn of the Wing Luke Museum, in an email. “Through the tours, we repeatedly hear stories from people reflecting on some personal or family connection to the building. It’s powerful for them to be able to walk the hallways and see the interior spaces up close.”

There’s also a chance for the building to become a racially-equitable artist studio, with affordable rents and a diversity of tenants, Tamaribuchi said. “We don’t really see that in the art world.”

“Seattle has become so expensive over the last decade, and it’s becoming a city that isn’t affordable to artists,” she continued. “If we lost this, all these artist studios…it would really be devastating to the culture of the city.”

Friends of Inscape was formed “to get the ball rolling,” said Tamaribuchi. If the group is successful in purchasing the building, a new nonprofit would be created to do so.

The clock is ticking, and Hudson worries the owners will offer the building to a buyer before Friends of Inscape can put together an offer. “That’s what keeps me up at night.”

For now, Friends of Inscape is building a supporter list and soliciting donations.

Brian Mayer, vice president of investments at the brokerage firm Marcus & Millichap, said there is no specific timeline for selling the building, and tenants will be allowed to stay in the building in the meantime.

“There’s no sale imminent or pending, so there’s still very much an opportunity for that group of tenants to purchase it if they wish to,” he said.

As for whether the owners would be willing to accept a lower price for the building so that it could be preserved as a cultural space, Mayer said it would likely depend on the terms of the offer. The owners “do value the use as an artist community, and if they can retain it as such with that group and they can pay a fair price for it, I think they’d be open to it.”