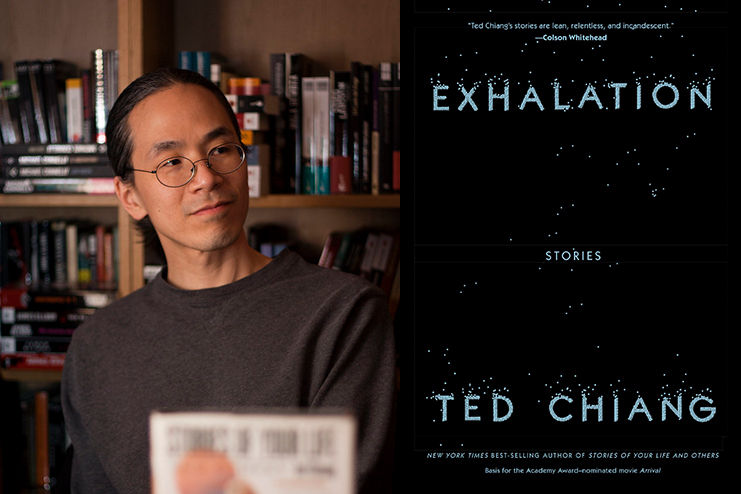 Ted Chiang’s Exhalation: Stories is a new book of short stories from the acclaimed author of Stories of Your Life and Others (2002), which contained the novella that served as the basis for the Academy Award-nominated film Arrival.

Exhalation includes all of the author’s published fiction since that first book, plus two stories that are appearing for the first time.

This Seattle area author’s visionary stories introduce characters performing tasks of everyday life as we know it, but then slip into inventions and processes that exercise our imaginations, such as the new story “Anxiety is the Dizziness of Freedom,” in which people communicate with alternate versions of themselves through a prism machine. Some stories refer to ancient cultures and faiths, such as “The Merchant and the Alchemist’s Gate,” involving time travel and the desire to change the past set in an ancient Bagdad bazaar. His stories challenge our current day reliance on our beliefs and also examines what he calls “discredited world views.”

Both Chiang’s parents were born in China and left the mainland for Taiwan during the Communist Revolution. They attended college in Taiwan and came to the U.S. for their graduate studies; they met here. Ted Chiang was born in Long Island, New York in 1967, near SUNY Stony Brook where his father is still an engineering professor. His mother was a librarian.

Since that time, he has written dozens of short stories that have won American and international awards, such as the Hugo and Nebula awards, in every category of science fiction. His first collection, Stories of Your Life and Others, has been translated into 21 languages. He also has worked as a technical writer for the software industry.

Chiang said he has been interested in science fiction “ever since I was a child. I became an avid reader of science fiction when I was 11, and started trying to write it almost immediately.” He continued, “Science fiction is known for the ‘sense of wonder’ it evokes in its readers, and that was definitely the case with me. It captured my imagination in a way that other types of fiction did not.”

Chiang was part of a recent panel at Wing Luke Museum that presented creators whose work is included in the major exhibit “Worlds Beyond Here: The Expanding Universe of APA Science Fiction” currently on view at the Museum. The panel, which I moderated, looked at “the connection between Asian Pacific Americans and the infinite possibilities of science fiction.” Other speakers were: augmented reality designer Tamiko Thiel, sculptor June Sekiguchi and illustrator Simon Kono.

A New Yorker article about the writer in January, 2017, described Chiang as “precise and affable.” In his talk for the panel, Chiang asked the audience, “Why is science fiction important?” And to answer himself, he clarified his perspective that Hollywood movies such as the Star Wars series are “fairy tales, not science fiction.” Stories in Hollywood are usually set up as good vs. evil, he said. The premise is that our world is good and the characters set out to fight an evil incursion to restore our status quo, a message which is implicitly conservative.

He called real science fiction a “post-industrial form of storytelling” which acknowledges the reality that in our world, the pace of change is accelerating such that our kids’ jobs will be beyond our imaginations. Science fiction offers a pattern in which the world starts out as familiar, then new things occur and the world never goes back to the way it was. He points out that this is a progressive story line.

His idea is that science fiction is a relevant form of fiction, it is a literature of change where change is inevitable.

He calls Hollywood stories conservative and techno-phobic, where the protagonists go back after the invention of a new technology, then defeat it, such as in Jurassic Park, written by Michael Crichton.

Chiang said that while his work is not “explicitly political,” science fiction and art serve a political purpose. He offered, “Science fiction imagines that the world could be different. The establishment always claims that the way things are now is the only way things could be. Art challenges that by offering different possibilities. This is why totalitarian societies repress art.

He pointed out that the film, The Matrix, is notable because it clearly articulates a progressive message. More than any film, it shows the overturning of the status quo, Chiang explained. He quoted the protagonist Neo’s final speech: “I don’t know the future. I didn’t come here to tell you how this is going to end. I came here to tell how it’s going to begin. I’m going to show these people what you don’t want them to see. I’m going to show them a world … without rules or controls, borders or boundaries. A world where anything is possible. Where we go from there is a choice I leave to you.”

Ultimately, Chiang said, “I think of science fiction as a way of using speculative or fantastic scenarios to examine the human condition. That might include experiences of cultural difference and otherness (such as an Asian American heritage), but it could also include things that no one would readily predict.”