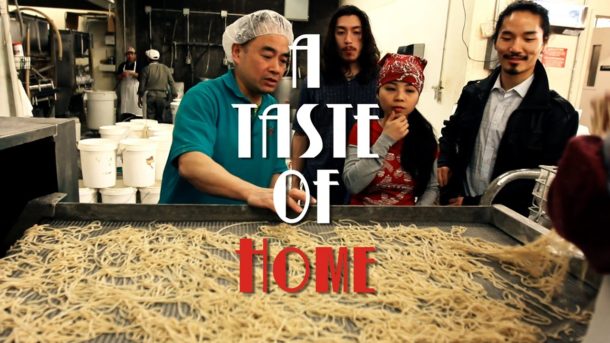 What follows is a conversation with Tay and Val, who created the opening night feature film A Taste of Home. The partners prefer to answer questions as one voice. Their actual names, with family names underlined, are Siang Hui Tay (Tay) and Xin Hui Tan (Val).

Television producer-director Tay and director-actor Val began their work on enabling people to tell their stories in their native Singapore. The past 14 years has led the award-winning filmmakers to extensive travel to intentionally meet and empower ordinary people seeking transformation in their lives. They produced and directed an unscripted reality TV series called P.S. I’m Sorry–bringing two parties together to facilitate an apology. The episode they recounted was of a son who was estranged from his father for five years and the apology that brought the family together again. The Facebook page created for the series then witnessed thousands of people finding the courage to publicly share their personal apologies after watching the show.

This beginning in 2010 led to a three-year bicycle expedition from Taiwan to Japan, Hawai‘i, Mexico, Central and South America. I Believe That Dreams Can Come True became a documentary project in which they held 400 sessions in 41 cities over 12 countries, taping and sharing peoples’ stories in an effort to help them find transformation through intentional and truthful storytelling. Eventually they landed in Los Angeles, where they tried to present their project in schools, but with little success due to non-availability on their schedules. They were invited to give two TEDx talks (Bellingham and Seattle), where they shared stories of dreams they had collected from around the world. They then decided to migrate to Seattle to continue inspiring dreams. This was the summer of 2013 and they have lived here since, presenting multimedia workshops as artists, making inspirational films and running a consulting agency focused on empowering visionary entrepreneurs and conscious businesses to lead with purpose.

Q. What was the inspiration for making the film A Taste of Home?

A. We were homesick and had not visited Singapore for many years. We wanted the taste of home; especially the kind of egg foo yung that our grandmothers made. We didn’t find a Singapore restaurant. So led by Yelp!, we went to Tai Tung Restaurant in Chinatown, but what we got was not our familiar dish! We saw that Asian American cuisine is different from Asian cuisine. Through interactions with community members like Tai Tung’s boss Harry Chan, and food anthropologist Maxine Chan, we became interested in the classic old Chinese American dishes, and the historic food establishments that cooked them for this immigrant community.

Q. Which businesses did you visit?

A. We looked for the oldest food businesses here, such as Tsue Chong Company, the noodle and fortune cookie maker. Also Mon Hei Chinese Bakery, which burned down in 2013, Fortuna Café on King Street, and Yick Fung Co.—one of the oldest Chinese grocery stores in Seattle Chinatown ID.

Q. What’s an example of a taste of home for you?

A. We found out about extinct ingredients and dishes here, which had been familiar to us, too. For example, preserved pomelo peels brined in a special sauce, which the early railroad workers steamed with pork placed on top of the rice they were already cooking, in order to preserve fuel, according to Aunty Maxine. We wanted to document the many stories of disappearance.

Q. What is the next step for this documenting of food history?

A. We worked hard to get support in terms of grants from 4Culture and the City Artist program at the Office of Arts and Culture, but we need to figure out how to travel the film to other Chinatowns around the States. It’s a multigenerational story worth sharing. We want to help other people explore their own taste of home.

Q. What is this empowerment training you do?

A. We work with visionary entrepreneurs and business leaders who want to make a greater impact by incorporating a sense of purpose, conscious engagement, and practical wisdom in their work. This includes corporate and individual training—both online and onsite; as well as immersive deep dives with CEOs of companies over an extended period.

Q. And I guess people want to know if you are a personal couple, as well as a professional one.

A. Yes we are. We’re grateful we get to work and play, live, and grow together—as business partners, artistic partners, as well as life-partners. It’s not easy and it’s certainly not for everyone. But by now we know that we help bring out the best in each other, and are stronger together. We like to say that’s how we get problems solved in half the time, and double our successes because we celebrate them two times!

Q. Do you ride your bicycles much these days?

A. We like to cook! And as storytellers we enjoy watching how others tell their stories. We especially enjoy Chef’s Table; which can get intense, but we love it! And there’s this other series, Pure Genius which we love because it inspires us to stay true to our intentions and never give up.

For more on Tay and Val, visit www.taynval.com.