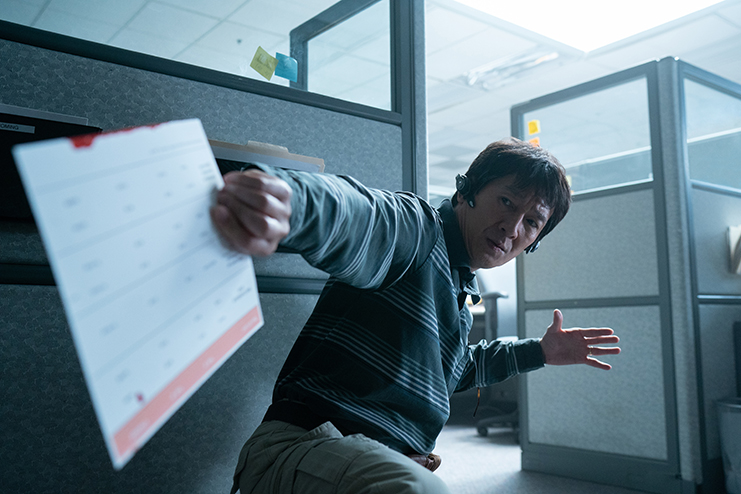 People of a certain age probably remember actor Ke Huy Quan for his roles in two of the most iconic ‘80s films: as Short Round in Indiana Jones and the Temple of Doom and Data in The Goonies. But in the years that followed his debut, Quan’s thespian ambitions were sidelined by Hollywood’s whiteness.

Leveraging his martial arts expertise and film degree from the University of Southern California, he turned his attention to working behind the scenes as everything from stunt coordinator and fight choreographer to producer.

This spring, Quan makes a triumphant return to the screen opposite Michelle Yeoh in Everything Everywhere All at Once.

Without revealing too much of the multiverse-set story, Quan and Yeoh play married couple Waymond and Evelyn Wang, childhood sweethearts whose spark has faltered and whose struggling laundromat business is under audit. Written and directed by Daniel Kwan and Daniel Scheinert, the film is kooky, poignant and full of surprises.

At a post-screening Q&A at this year’s SXSW festival, Quan described feeling nervous for playing not just one character but three versions of him. In order to prepare for the part, his first major role in nearly 20 years, Quan hired acting, dialog, voice and body movement coaches to help him find ways to distinguish normal Waymond from Alpha Waymond and CEO Waymond.

Training was also key to the character’s physicality, as Quan’s piéce de résistance in the film is a fight sequence that has Alpha Waymond using his fanny pack to take down a team of IRS security officers. For weeks the actor practiced at home, much to his wife’s chagrin, until he could successfully brandish it like a rope dart.

Last week, he spoke to us about his unexpected comeback, why this film meant so much to him, and what he hopes the audience will see in it. Like his character in the film, Quan exudes a particular warmth and earnestness that comes across even over Zoom.

Misa Shikuma: I was lucky enough to attend the world premiere at SXSW. I laughed; I cried; I was on the edge of my seat. What was your reaction when you first got the script?

Ke Huy Quan: I cried, for a number of reasons. One was that it was just beautifully written. And this was a script that I [had] wanted to read for many, many years. When I was younger, a lot of the scripts that I read only featured Asian actors in very stereotypical or marginalized ways, and a lot of times they didn’t even have a character name! [They] were just one or two lines, and if they were lucky they’d be featured on a few pages. So to come upon this script that featured a Chinese American family was amazing. And not only that, it’s not about identity! It’s about this family that has issues that are relatable to everyone.

MS: You’ve spoken in previous interviews about your physical preparation for the role, which is a huge part of the character, but for me Waymond is the emotional center of the movie. You embody a vulnerability and a tenderness that’s rare to see in Asian men – both on-screen and in real life. How did you approach the non-physical aspects of the character?

KHQ: Had this role been given to me 10 or 15 years ago I don’t think I would have been able to do it. I mean, I really [dug] deep within myself to look back upon all the life experiences that I’ve had. I always feel that a full life has ups and downs, peaks and valleys – that’s what makes it beautiful. I poured my entire life into these three different characters, and they all represent different things to me. For example, when things were tough and I wanted to give up on this industry, I looked upon Alpha Waymond for the fighter that he is.

MS: Another thing that I loved about the movie is the way that it featured you and Michelle Yeoh as unconventional action leads. Given your experience, do you see yourself doing more action roles in the future?

KHQ: I love action movies. I grew up watching [them] – you know Jackie Chan, Sammo Hung, Jet Li. So to be able to do that in front of the camera is a real privilege. I don’t take getting a second chance at acting for granted, so I’d love to try a lot of different things – a lot of different roles that I wanted to try when I was younger but didn’t get the opportunity.

MS: You’ve mentioned having moments of wanting to give up on the industry. When you were doing the work behind the camera, with stunts and fight sequences, was that fulfilling for you, or in the back of your mind did you want to get back into acting?

KHQ: When I decided to step away from acting and started working behind the camera, I was content. I guess I tried to bury that part [of me] but I remember there were certain times it would seep through. And when it did I would lie to myself and say, ‘Nah, you don’t want to do that again. It’s over. It’s done. You’re happy doing this now.’

I remember walking in front of the camera again for the very first time after I decided to get back into acting, and all those wonderful memories of me as a kid came rushing back in. All of a sudden I found myself at a really happy place, and I felt like, ‘This is where I belong. This is where I want to be.’

MS: There’s a lot to unpack in this movie – there’s the sci-fi, the family story, the generational trauma, etc. What do you hope that people take away from the story and the journey that the Wang family goes through?

KHQ: All of us have gone through a lot in the last two years. Everyone I know has experienced some form of loss. I hope people can go watch our movie and escape the real world for a couple hours and walk away feeling like they witnessed a great conversation being had – a conversation about family, love and connection. What I really love about Waymond is that he’s a true believer in empathy and kindness. I wish we all had that for one another because empathy creates a pathway for understanding and acceptance.