Anyone who has seen, heard or felt the boom of the taiko — the large festival drums of Japan — knows the power, beauty and visceral vibrations they produce. Those who have seen a taiko group in performance would likely recognize the taiko as Japanese in origin, and most would presume that what they were hearing, seeing and feeling was quite traditional. And most would be wrong.

To understand why, you would have travel to Japan and trace the roots of “kumi-daiko” (group drumming). Or you could read a new book by Shawn Bender.  “Taiko Boom” examines the rise of kumi-daiko as a new performing art in Japan from the post-World War II era to today. This groundbreaking work is the first comprehensive study of the subject in English (or Japanese) and as such, is destined to be a classic text.

Bender is a cultural anthropologist by training, and the book grew out of his doctoral dissertation, so it operates on two levels. The first (and more reader-friendly) is the history of kumi-daiko, starting with four groups he sees as seminal to the development of the new art form: Osuwa Daiko, Sukeroku Daiko, Ondekoza and Kodo.

The second level flows from the anthropological analysis of taiko as a bridge between the folkloric, rural past and the modernized, urban present, between the highly particularized local manifestation of culture and the dislocation and commodification of culture in the globalized economy. This analysis, while fascinating to a student of taiko, may be too academic for many readers.

Not to worry, though. Bender provides much detail on the personalities involved in each seminal group, their reasons for taking taiko beyond its historically limited role, and the challenges faced in the process. Through interviews, field work and practice (Bender is himself a taiko player), we find that Oguchi Daihachi, founder of Osuwa Daiko and considered the “father of kumi-daiko” in Japan, was a jazz drummer by training; that one of the early teachers of Sukeroku Taiko was influenced and inspired by Brazilian samba; that Ondekoza originally had a vision of creating an artisan village featuring all manner of folk arts and crafts but settled on taiko as their mainstay because it was the only art that could pay the bills. 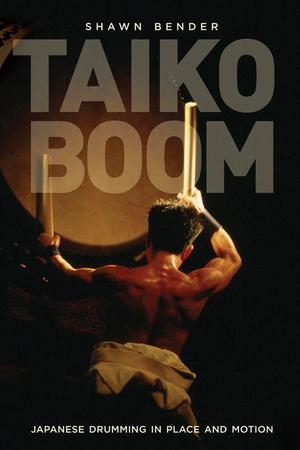 Bender also takes fascinating side trips into the stories of taiko makers and their struggle to gain respect and develop the courage to play the drums they made. He outlines the rise of women taiko players in Japan as they work within an art form that is anything but gender-neutral in its conception and development, while dealing with a culture that maintains many patriarchal attitudes. He takes us to the small villages and islands from which many of the most popular styles of taiko performance emanate, including Hachijo-jima, Miyake-jima and Chichibu.

Bender pays special attention to Kodo, partially because he spent the most time with them, but also because they have the most developed philosophy of taiko and its connection to both the “furusato” (old village) culture and the modern global one.  He lived with them for long stretches, both to study what they do (technique, training regimen, performance) and why they do it and how both have evolved over the years.

One astonishing paradox that Bender finds: In Japan, kumi-daiko is not considered traditional at all. Instead, it is seen as a post-World War II development (which it is) and therefore a modern form. Yet, because it has its roots in folk festivals, it uses the same instruments as the old shrine and temple ceremonies and has eschewed use of any Western instruments or stylization (for the most part). Kumi-daiko is so dynamic and literally heart-pounding,  it now enjoys enormous popularity in Japan, particularly at the hundreds of folk festivals held throughout the nation.

Much more can be gleaned from “Taiko Boom” given the time and interest. (Why, even the footnotes are revealing). Whether in place or in motion, those who really want to know Japanese drumming will find this book essential.

KODO appears in concert as part of the University of Washington World Series at Meany Hall on February 9 & 10. For tickets or information, call (206) 543-4880 or go to uwworldseries.org.

Then on February 17, the Friends of Minidoka will hold a benefit Day of Remembrance 2013 Taiko Festival featuring nine local groups in Pigott Auditorium at Seattle U. Buy tickets online: www.minidokataiko.brownpapertickets.com/or in person at the Japanese Cultural and Community Center of Washington (JCCCW).