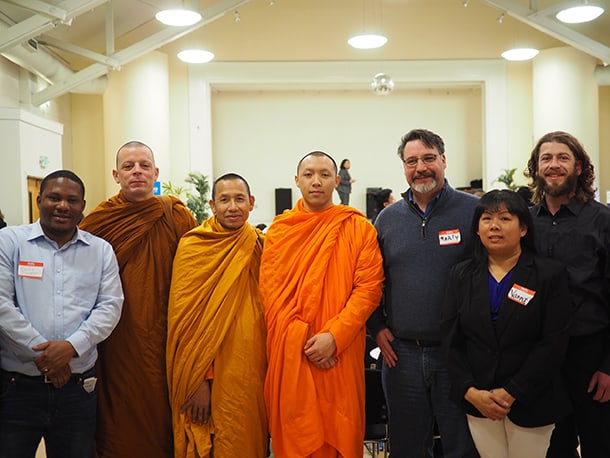 Tacoma Healing Awareness Community (THAC) held their annual Deportation Town Hall on Saturday, February 24, 2018, at the Asia Pacific Cultural Center in Tacoma, Washington, about five miles away from the Northwest Detention Center, one of the largest immigration holding facilities in the nation. Organizers designed the event to help inform citizens and provide resources for communities affected by immigration law through free case assessments provided by immigration lawyers.

THAC ia a grassroots community organization and advocates on behalf of “underrepresented SE Asian voices… seek[ing] to organize, support and offer leadership opportunities” within the community. THAC engages with their target communities by working on community issues including incarceration and deportation.

Presentations included Khmer and Thai cultural performances, testimonials by community members and speakers from the legal community. The event began with a blessing by Buddhist monks, followed by introductions of community groups and lawyers present to offer help. Many immigrant/refugee advocacy groups gave presentations including Attorney Sopath Chou-Colwell, who facilitated a Know Your Rights presentation on how to interact with federal agents from U.S. Immigration and Customs Enforcement (ICE).

The Northwest Detention Center holds many of the inmates in the region with orders of approval. Established in 2004, it is operated by the Geo Group, a company specializing in for- profit prisons and contracted by the Department of Homeland Security, to hold prisoners under its jurisdiction. The detention center has a population of 1,575 inmates.

As the Trump administration has begun widening the net on people it deems deportable, different communities have come together to share resources. “There’s isolated activism about Cambodians getting deported or Central Americans getting deported…often times the connections aren’t made,” said Jay Stansell, a professor at Evergreen State College and one of many representatives from the legal community present at the event. “We realize that this is an enormous deportation machine that’s acting across cultures and across the country and ripping up families regardless of nationality.”

Stansell came into contact with the Cambodian American community when he began representing defendants of Cambodian descent in 1999. He was instrumental in Zadyvas vs. Davis, a Supreme Court case that ruled people under order of deportation cannot be held longer than six months and subsequently allowed them to go back to their community while they awaited deportation.

“It’s really important that connections be made from one community to another…often times they’re isolated,” said Stansell.

Tacoma city councilmember Keith Blocker (District #3) and former councilmember Marty Campbell were present. “[The event] brings people together around a very important cause, it helps bring more solidarity and awareness… not enough people are aware of the repercussions when someone is taken away from their family,” said Councilmember Blocker.

While the Cambodian American community has been dealing with deportation since 2002, it wasn’t until 2008 that Vietnam and United States brokered a memorandum of understanding to accept deportees. Still, this MOU only affected people of Vietnamese descent who arrived after July 12, 1995. The Trump administration has now widened that scope to make those at risk of deportation greater in the Vietnamese community. Councilmember Blocker said, “There are many folks with final order or removal that if a lawyer would take a close look at it… might be grounds to reopen a case.”

“Rather than waiting for the knock on the door and saying, ‘I got a travel document from Cambodia’, we’re urging everyone to get screened,” Stansell said.

“The event speaks to the power of community organizing and resilience. I’m always in awe of our community’s sense of power, that despite it all, we are able to gather and organize,” said Nissana Nov, a native of Tacoma.