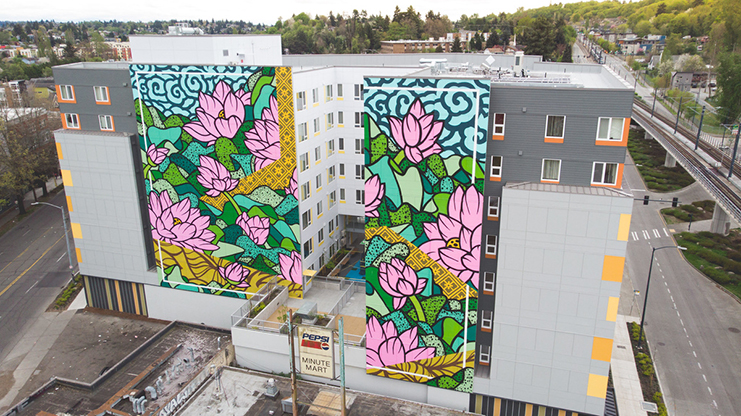 For Tacoma-based muralist, designer, and public artist Kenji Hamai Stoll (KHS), art is more than creating. It is the vessel through which he examines and connects with his Japanese-American identity, builds community, and learns about how his work impacts and engages others.

His exploration into art first began as a middle schooler doing graffiti, which was largely inspired by graffiti murals around Tacoma in the early 2000s. Being raised in a Japanese-American household with ties to Hawaii introduced him to a variety of Japanese and Hawaiian art. This influenced his work early on, evident in the patterns and motifs strewed throughout his sketches as a youth.

These sketches soon evolved, and KHS eventually started doing larger scale murals and community work through the Tacoma-based arts and creative education youth organization Fab-5. His work and experience at Fab-5 soon evolved even more, and eventually led KMS into the realm of public art.

Currently, KHS is working on public art projects for Sound Transit’s Tacoma and Redmond locations, as well as work for Yellow No. 5 — a group show opening this fall at Bellevue Art Museum, curated by Tariqa Waters of Martyr Sauce (Seattle).

Throughout his extensive career, the various aspects of his life — growing up Buddhist, being Japanese-American, having a strong connection to Hawaii — have been continuously reflected in his work. His artistic practice is inspired by the Buddhist teachings of impermanence and interdependence — teachings that he grew up with as a child. For KHS, these themes resonated with him as he did graffiti, because “the work is never permanent and there’s a strong emphasis on considering how your work impacts others,” he shared.

These Buddhist teachings continue to guide his public art practice and help inform him of the constant cycle of change that communities experience, and the influence we have on others. In addition to these teachings, his experience of straddling two disparate worlds informs how he navigates through life, and how he approaches both community and cultural work. KHS shared, “Looking back, I’m grateful to have grown up with various perspectives on community and my culture, and consider how that shapes who I am today. More than anything, it’s helped me understand how powerful, and how much of a privilege, being connected to your culture really is, and why it’s so important to nurture and cultivate.” He believes it’s important now, more than ever, to dig deep into the work of reconnecting to his cultural roots, and invest in a narrative that will be passed down to generations to come about who Japanese-Americans are, where they come from, and what they value as a community.

The scope of his work inherently involves community engagement, which KHS explains, “is about giving people the power and opportunity to create change in their lives and their communities.” While he shares that doing this type of work is challenging, he loves doing it because, “by nature, community engagement forces us to reckon with the fact that our actions, our work, and its impacts are bigger than any one of us.” Whether it’s large scale murals or grassroots work rooted in community, KHS skillfully balances collaboration and humility throughout.

With the plethora of projects under his belt, KHS is looking to scale back the number of public art projects he takes on moving forward. The intention for this, he says, “is both so that I can do my best work possible, as well as making sure the projects I take on are in alignment with my values.” Outside of his public art practice, KHS can be found focusing his energy towards studying Japanese language and working as a tattoo apprentice.

To learn more about Kenji Hamai Stoll (KHS) and his work, you can visit his website at www.yokenji.net, or on Instagram @_yokenji.