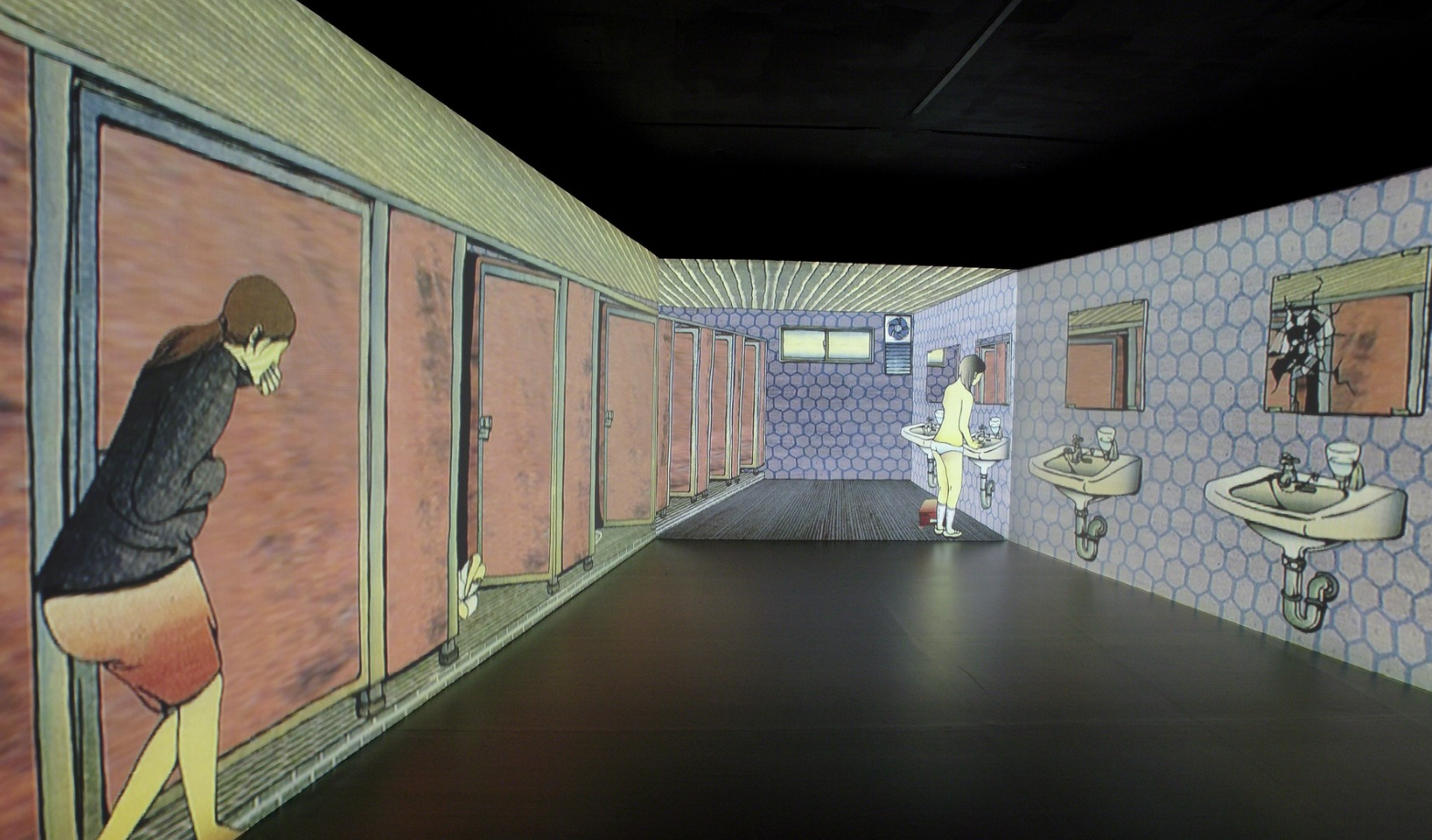 “And the point is, to live everything” extolled poet Rilke. “Live the questions now. Perhaps you will then gradually, without noticing it, live along some distant day into the answer.”

The Asian Art Museum’s current special exhibit, Utsutsushi Utsushi, is one artist’s attempt at living everything—past and present, illusion and reality—in the here and now. A solo exhibit by acclaimed Japanese video artist Tabaimo, the work is a mix of new and existing video installations. Evoking the refinement of 17th-century woodblock prints in a series of technically sophisticated, multi-screen animations, Utsutsushi Utsushi takes viewers through a fresh, unprecedented and sometimes disturbing sensory journey “connecting the past and the future to the present.”

The exhibit title is a phrase playfully invented by the 41-year old curator and creator. Utsutsushi is a word play on utstsu—meaning things that exist in the world—and the artistic concept of utsushi, which translates literally to copying, an artistic discipline of paying homage to past masters that Tabaimo learned from her ceramicist mother, Tabata Shion.

Stipulating that utsushi isn’t quite the same as reproducing, Tabaimo initially makes what utsushi is relatable, even seemingly self-evident to the newly arrived viewer. The Obscuring Moon, on display in the first gallery, transfers to video imagery she derived from Moon Cape, Utagawa Hiroshige’s ukiyo-e print. Projected onto screens placed at a 90-degree angle, The Obscuring Moon features gently opening-and-closing shoji screens, and the darkly humorous arrival and departure of various critters. While in the Hiroshige print the mysterious female figure is all but hidden, Tabaimo infuses her with intriguing presence, her movements injecting her with life.

And yet, a couple of galleries later, just when you thought you got the hang of what utsushi is all about, Tabaimo invites the viewers to challenge their thinking. Completely.

Haunted House is a work inspired by large format folding screens and handscrolls. In this form of traditional Japanese art, the viewer sees a series of vignettes, and the eye travels in long, horizontal sweeps.  That kinesthetic experience is meticulously transferred into video form in Haunted House.  This installation includes an accompanying soundtrack, an upbeat sound is reminiscent of vintage game shows. The saccharine tune feels congruent with the illustration of a modern day apartment complex, filled with ordinary people doing ordinary things. But before long, that music begins to feel  false and creepy, as viewers realize the video is presented through the lens of a slowly-moving peephole. Eventually, their eyes travel from a woman hanging laundry to dry, to a hanging corpse just one unit over. Reality, utsutsu, is not what it seems; and neither, apparently, is utsushi.

In the next three galleries, the work becomes more complex, the narrative structure no longer held together by a linear past-meets-present sequence. This further distances viewers from the easy knowing of what utsushi is from just a few galleries ago.

Chirping, hanging in the second to last gallery, is a newly created work inspired by pair of 19th century hanging silk scrolls. Depicting butterflies and dragonflies, the historical work hangs on either side of the similarly shaped and sized pair of projection screens. The insects dance onto the blank screen with flourish, then take their places. Out of all the works in Utsutsushi Utsushi, the “finished” image on screen presents most strikingly as a cut-and-paste replica of the original.

As the video progresses further, the insects begin to bleed in pretty colors onto the screen, as if they’ve flown into a windshield. “When people are able to form connections across time and space,” Tabaimo asserts, “they are able to do things they couldn’t achieve on their own.”  As if they’re metaphors for such people, the dead-looking butterflies in Chirping defy the space-time continuum, and, their apparent demise. Unlike the ones solidly affixed to the silk scrolls, these butterflies  leap. And disappear.

Throughout the 8-gallery exhibit, Tabaimo consistently demonstrates her indebtedness to past Japanese artists. This is most evident her impeccable transference of form: colors, shapes, proportions. While she doesn’t veer from this display of humility in her execution, choosing Crow as her final installation is still subversive.  Crow takes inspiration from the Asian Art Museum’s most beloved pair of gold, 6-panel screens, and re-imagines the crows living in the shadow of the night.  “Crows are associated with untidiness because they look for garbage and create litter,” says Tabaimo. Crow symbolizes the artist’s direct wish not to tidy up as Japanese custom dictates at the end of events.  She will go against tradition to leave a mess of thoughts in the viewers mind.

In the final act of her immersive journey, Tabaimo reveals that she had intended all along not to answer what utsushi is. Rather, she meant to draw viewers into joining her in living the question “what is utsushi?” now.  Uncomfortable as that ambiguity is, viewers realize that somewhere along the way, they’d given consent to joining her there without noticing it. Perhaps each viewer will leave this exhibit with an enhanced ability to “live everything” themselves, connecting past to future to the present, and as Rilke predicted a century ago, “live along some distant day into the answer.”