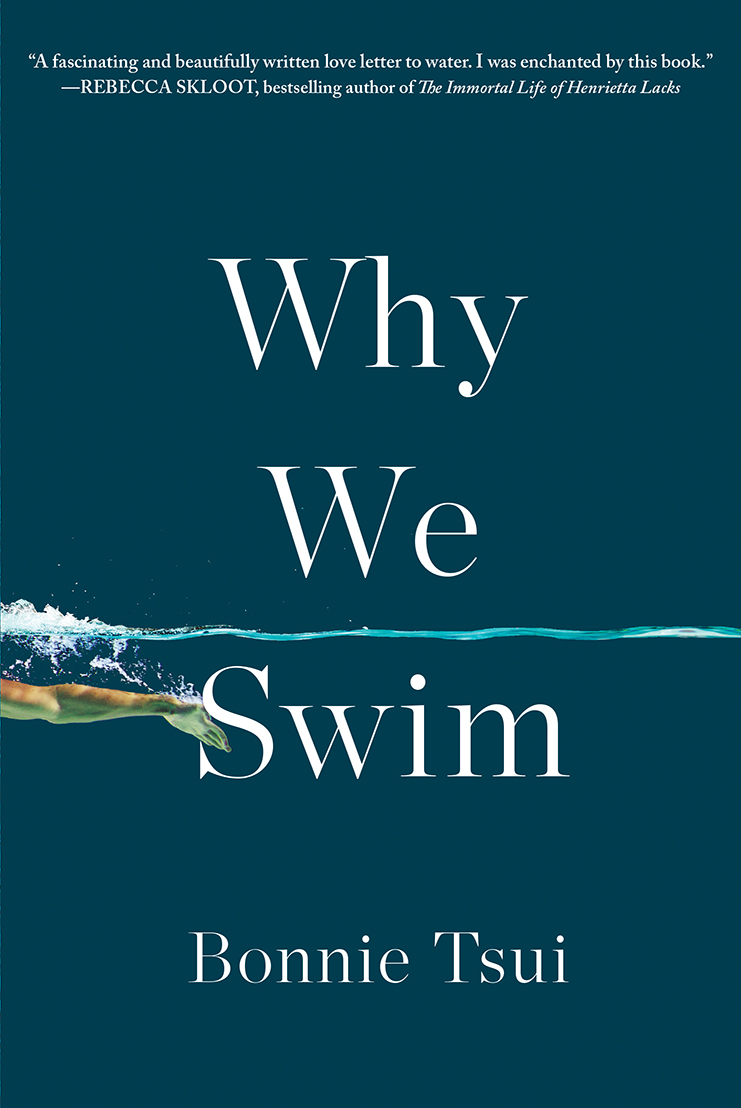 Netflix isn’t the only escape from our newly sheltered, all-too-anxious lives. Screens can only distract us so much, and online book sellers are offering us an alternative way to calm ourselves: the written word. Many authors with new  releases are reframing their original dismay with optimism. Perhaps their forthcoming works will boost national morale instead of fading behind the latest streaming hits or withering beneath foreboding headlines. One such author is Bonnie Tsui, whose previous works include American Chinatown and She Went Into the Field.

COVID-19 travel restrictions forced Tsui to cancel her promotional tour for Why We Swim, out April 14th, but she hopes the book will provide a “welcome balm [for readers] during these strange and anxious times.”

Why We Swim is a unique, journalistic memoir that explores our obsession with the aquatic portion of globe. It might have tempted athletically-minded readers under ordinary circumstances, but why should any of us care about swimming when we’re unlikely to slide into a pool in the near future? Tsui’s words tempt even the least enthusiastic swimmers to thumb through her pages. “Wherever it is I might be in my head, the winking where-you-are-not-ness of water issues an invitation to go elsewhere.” Why We Swim’s encyclopedic content recommends it to all types of book-lovers, from history buffs, to science nerds, to globetrotting adventurers, to sports fans. And let’s face it: We’d all welcome the chance to go somewhere else.

Tsui begins her journey in the Sahara – but not the Sahara as we know it. She’s interviewing the paleontologist Paul Sereno, an expert on the “Green Sahara.” Sereno and his team discovered skeletons and artifacts suggesting that parts of the Sahara once contained lakes up to 10 feet deep. These lakes were inhabited by a prehistoric civilization whose art depicts them swimming. Were these mysterious tribesmen the world’s first swimmers? Tsui whisks us from the now-arid Sahara to the still-lush Indonesia and Thailand. There we join her in observing the Bajau and Moken tribes, free-diving fishermen who walk on the ocean’s floor and see clearly underwater.  These peoples have been living and hunting the same way for thousands of years but, unlike the extinct swimmers of the Green Sahara, have outlasted the ravages of climate change plus their own regional menace – the tsunami.

After guiding us through this observational research, Tsui transports us to Iceland. Here she transforms into a participant as well as a reporter, a duality she sustains for most of the book. She meets Gudlaugur Fridparsson, the renowned fisherman who swam six kilometers to safety in 41-degree water after his ship capsized during a storm. Not content to interview the living legend, Tsui joins in the Gudlaugssund, the annual race that honors his feat and raises awareness for swimming safety. Here we first appreciate her gift for transmitting her experiences. We need not have a penchant for swimming – or a desire to dive into 45-degree water – to sustain her initial physical shock or enjoy her subsequent emotional elation.

Gudlaugur’s larger-than-life survival story flows into a topic that resonates with our national consciousness: Water for wellness. Tsui guides us through a detailed examination of how water has healed humans throughout history, beginning with ancient Egyptian water cures and ending with neurological and obesity research at the University of California at San Francisco. While this section might intimidate those less interested in history or science, Tsui sustains readers’ interest with anecdotes about her own physical and emotional healing in the water.

If her previous section meandered through global aquatic history, Tsui follows it with an action-packed look at contemporary swimming in the United States. She begins during the Iraq war with “Coach Jay,” a cultural attaché for the U.S. Foreign Service who was stationed in Baghdad. He spent the early part of his residency stationed in a “Green Zone” – aka one of Saddam Hussein’s abandoned palaces. Coach Jay started an unofficial swimming club to help his fellow troops relax, but once he was transferred to a different location the club expanded to include staff from all over the world, including Iraqi men and women. Unlike many of the locations that pepper Tsui’s nonfiction narrative, she never visits either of Jay’s swimming sites. Yet perhaps this is where we perceive her talent most clearly. She builds Jay’s war-torn world from their conversations and her imagination, but we experience it as vividly as we do the locations she visits in person.

Tsui glides from Coach Jay to indomitable Olympian Sara Torres before ending her swimming compendium in Japan’s soothing waters. Here we witness nihon eiho, one of the eighteen samurai arts. Samurai swimming dates from Japan’s feudal period in the seventeenth century, and includes fascinating techniques such as full-armor swimming, grey-mullet jumping, and standing swimming. Nihon eiho is where we wish Tsui had sustained her adventurer’s spirit just a little longer. Although the masters she interviews press her to join them – and especially since she notes “standing swimming” is simply a more graceful version of treading water – Tsui claims that she really can’t stop taking notes long enough to change into a bathing suit and try it for herself. While she might be justifiably reticent about the masters’ full-armor swimming or grey-mullet jumping, she spends enough time describing the white belt classes’ simple exercises that we suspect her interviewees would have found attainable movements for her to sample.

But in spite of Tsui’s uncharacteristic eye-witness attitude in Japan, her overall enthusiasm and vulnerability unifies a multifaceted work and makes it relevant to our uncertain times. She paints her settings and interviewees with such color that we, too, feel we’ve circled the globe and made new friends. Best of all, she’s made herself our friend. We know how swimming has strengthened her, from overcoming racism, to healing from divorce and coping with miscarriage. It’s hard not to find some part of Bonnie that resonates with us. And once she feels like one of us, her enthusiasm trickles down to us as well. Whether you’re a swimmer missing your old routine, a globetrotter dreaming of new adventures when international borders reopen, or simply a reader looking for an inspiring friend, Why We Swim is a good place to start.