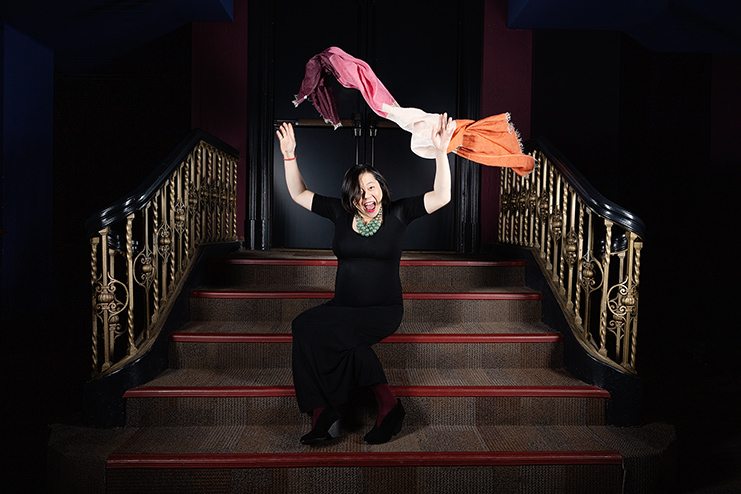 For the past several years, writer and performer Susan Lieu has been honing and presenting her one-woman show 140 LBS: How Beauty Killed My Mother, based on the death of her mother following plastic surgery. And now, her sequel, Over 140 LBS, receives its Seattle premiere in the ACTLab Solo Performance Festival.

When Lieu first workshopped the original 140 LBS at Pocket Theatre in 2017, her initial focus was to right a grievous wrong. “As a child of nail salon workers and now a grown adult with two Ivy League degrees, I have always been aware of my unique perspective and privilege,” Lieu said. “It was with that energy that I wanted to avenge my mother’s death and bring justice so that people like my mom wouldn’t continue to be exploited by men like her plastic surgeon who preyed on vulnerable refugees.”

But over the course of her recent national tour with the show, Lieu discovered a deeper connection with her material. “I realized my true motivation and the crux of the show was really about my quest to know my mother,” she said. “By February 2020, I will have performed the core content of 140 LBS over 50 times and I feel closer to my mom now more than ever. I feel like she joins me each night onstage and we do something together, for ourselves, each other, and the audience.”

She also learned the importance of community. “The cities that consistently had over 80 percent tickets sold to sold-out runs were those with community support,” she said. “Community organizations, particularly Asian American ones, recognized the value of the work and amplified the show to their networks. The houses were packed and it was a healing collective experience at each of these performances.”

This healing was an especially rewarding surprise for Lieu. “I see how it touches a deep cord in the trauma they’ve experienced in their lives — as women, Asian Americans, and simply as humans,” she said. “To see our stories represented onstage — specifically those related to intergenerational trauma and being a child of refugees or immigrants — it validates our experience in a way where there isn’t shame and sadness but power.”

Even more gratifying was the sense of freedom that 140 LBS seemed to give audience members. “After every show, I have met numerous folks who share that they feel seen and who become inspired to share their stories,” Lieu said. “There is a pay-it-forward energy to the show where show goers want to share the benefit they received with others.”

Lieu sees this energy being used to further expand community. “We all want the same things, to give and receive love,” she said. “And for the show, that looks like buying tickets for others so they can debrief together on the show’s themes which l call ‘hush topics’ — death, beauty standards, family dynamics — things we never learned how to deal with in school.”

But the national tour yielded one more surprise: a baby on the way. “Creating Over 140 LBS has been its own gestational process,” Lieu said. “My director Sara Porkalob had me keep a pregnancy journal to write down my honest thoughts about my experiences, my physical development, how my Vietnamese heritage colored my experience, how my new offspring was changing the relationships I had with my family.”

Out of this journal came the new sequel that premieres this month, in which Lieu herself becomes the mother in this latest chapter of this mother-daughter story. “My goal in this new show is to address how to break the cycle of intergenerational trauma so many children of immigrants and low-income people have inherited,” she said. “And especially as a pregnant woman, my body has been judged and touched in ways that infuriate me because it’s indicative of the expectations Vietnamese and American society have placed upon me without my consent.”

To present this show as the headliner for ACTLab’s Solo Festival feels like a rite of passage for Lieu. “Placing my mother’s story as a Vietnamese refugee front and center in this white-dominant institution is a statement in itself,” she said. “I’m bringing in a diverse audience to this space, shifting the energy around who belongs and who is welcome.”

But creating and presenting these two one-woman shows has not been without challenges. “I pivoted into my performance arts career after I got an MBA, with hefty loans, and a mortgage which was a risky financial situation for me,” she said. “Add a baby into that mix with eventual fixed daycare expenses and that creates an especially dicey scenario.”

She felt compelled to treat these projects as a start-up venture. “While it would have been safer if I treated the performance arts as a hobby,” she said, “I knew in my core that was non-negotiable.”

Again, community helped provide Lieu with a solid foundation. “I can’t afford a producer or publicist so I had to level up quickly learning from my network who are experts and then invest the time to get the results,” she said. “As a marketer for my family chocolate company I helped co-found, Socola Chocolatier, and for tech companies I’ve consulted for, I leveraged my past experience to develop a 7-prong marketing strategy for finding sponsorship and selling tickets which has resulted in numerous sold-out runs, so I can pay my designer team competitive wages and make my business school loan payments.”

Lieu is facing her fears of failure and rejection by working to share lessons learned. “I’ll be sharing my learnings and tools I’ve developed this Winter 2020 as part of a curriculum I’m writing which I call The Artist MBA,” she said. “After a maternity leave, you’ll likely see me on a university tour in the fall, possibly workshopping new content in mediums other than theatre, and releasing The Artist MBA curriculum.”

And she plans to take her stories even further. “Since my shows are so emotionally vulnerable, I’ve always been curious about scaling my story,” she said. “Currently I’m working on a book proposal and am in conversation with film and television producers about strategies on how to bring the story to life onscreen.”