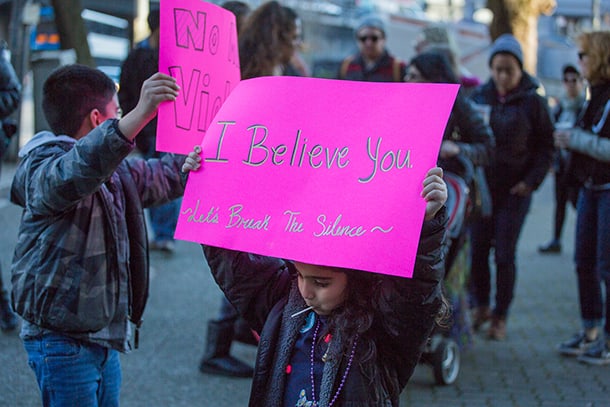 Sex and disability. When is the last time you talked about that? We live in an ableist culture that often infantilizes people with disabilities and denies their sexuality. We live in a culture where we do not have meaningful sex education for young people with disabilities. We also live in a culture that turns away from thinking about sex or sexuality in long-term care facilities or with elder-care facilities. This has also led to a blind spot in our anti-violence movements when it comes to supporting survivors who are disabled.

NPR recently reported that people with intellectual disabilities are seven times more likely to experience sexual assault than the general population. This is the highest rate of victimization experienced by any group in the United States.

Take that in. Sexual violence against people with disabilities is a wild epidemic in our communities. Joanne Alcantara, executive director for API Chaya, stated, “Where marginalization and imbalances of power thrive, we also see harm and exploitation. Disability justice is such a critical area for us to work in as we move to create a culture that values consent and healthy boundaries.”

Indeed, Mia Mingus, disability justice activist, has written extensively about the everyday manifestations of forced intimacy that people with disabilities experience. She shares, “Forced intimacy is the opposite of access intimacy. It feels exploitative, exhausting and at times violating…. I cannot count the number of times a strange man has pushed my wheelchair in the airport, while saying offensive and gross comments to me. These are the moments where disability, race, gender, immigration, class, age and sexuality collide together at once, indistinguishable from one another.”

In home care and long-term care settings where people with disabilities rely every day on caregivers or others, forced intimacy can happen as someone is getting dressed, moving from one position to another or practicing daily hygiene. Sexual harassment, sexual assault and rape are severely underreported as having to rely on an abusive person for survival or live with an abusive co-resident creates unique challenges for a survivor to access safety, healing and long-term well being.

In 2017, API Chaya embarked on a new partnership with Disability Rights Washington, the Arc of King County and the Long-Term Care Ombudsman Project to work together to support survivors in long-term care settings. The goal of this collaboration is to learn from each other and develop a co-referral model in which sexual assault survivors who have disabilities can access meaningful support from multiple agencies. The success of the collaboration so far has been in the cross-training between agencies and in the creation of new visions for increasing accessibility of services.