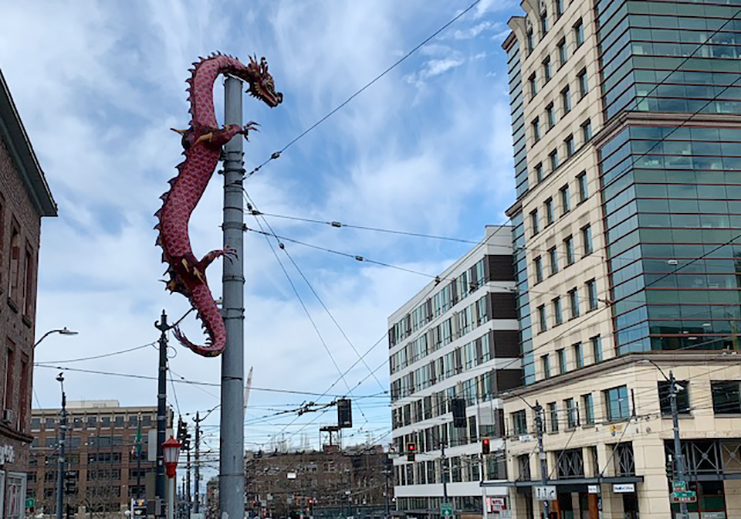 In 2020, the Seattle Chinatown International District Preservation and Development Authority (SCIDpda) created a survey and collected feedback and data and concluded that there was strong interest from the local community regarding the relocation in the neighborhood of dragon sculptures currently at 5th and S. King.

The dragon sculptures were commissioned by CIDBIA in 2001 with the goal of defining the borders of the district and distinguishing the area from other nearby developments and the stadiums in SODO. They were designed by Seattle artist Meng Huang. Currently, SCIDpda has created another survey open to the public to further gauge community interest in possible relocation sites for the dragons, and if it is still a project worth investing in.

“So the dragons survey [will] end this month, and likely take one to two months to analyze the data, just because we also have the printed survey…we have to enter the online one so we can have all the data in one location,” Julie Yuan, public realm and community coordinator at SCIDpda said.

According to An Huynh, community development manager at the SCIDpda, “It was challenging for us to kind of figure out how do we get community input into this project. And we tried with our paper surveys and reaching out to buildings and our residents.”

Before the dragons were installed, a Fung Shui expert looked at the streets and corridors to see which locations would be optimal for good luck. Due to the pandemic, there has been no in-person engagement planned for this project. According to Yuan, SCIDpda has worked with the dragon producer, Martin Brunt, to determine the cost estimates of the project; which will be costly and require fundraising.

“It’s a community engagement process to see if relocation is an interest of the greater community…[we] wanted to clarify with community members at large to see if there was interest to kind of corroborate this interest that we were hearing,” Huynh said.

The dragons were installed at their locations over two decades ago and have not moved since. SCIDpda hopes to preserve this piece of public art because of its cultural significance to the community. A committee of members has also been formed to advise the relocation project due to the various city entities that would be involved within the process.

“This project [relocating the dragons] was born out of the 2018 lighting study that assessed lighting challenges and strengths of the entire neighborhood,” Huynh said. “And one of the projects that came out was to light these dragons because they’re a piece of public art that a lot of community members identify with,” Huynh said.

SCIDpda also hopes to eventually light the dragons but they want to ensure that they’re located at the best locations before it happens. According to Huynh, the dragons will be pretty easy to relocate to other poles, with the most difficult ones being the two located on Jackson St. that are facing each other at the Chinatown streetcar stop. The heads of those dragons are on top of a pole.

“And it’s really a shame that the dragons are completely dark at night…so we really want to get this right,” Huynh said.