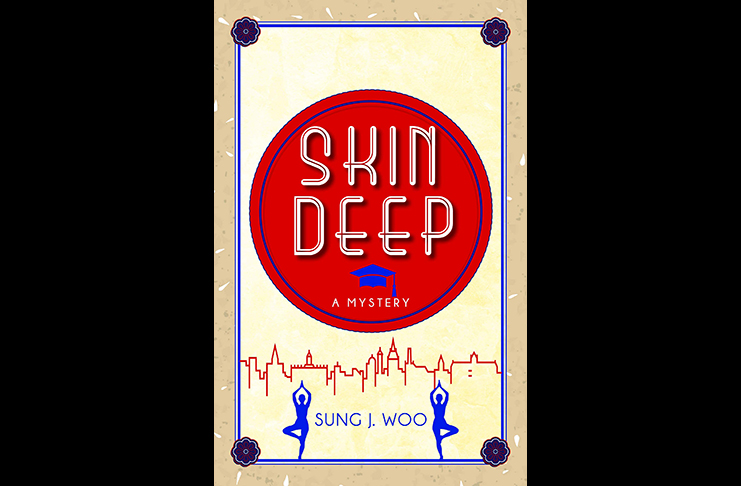 In 2020, Sung J. Woo published the first book, called Skin Deep, of a new mystery series whose protagonist is a Korean American adoptee with an Irish name, Siobhan O’Brien. Now, Woo is following up that book with a second in the series, tentatively titled Deep Roots.

Deep roots are indeed what Woo has both in writing and in Korean American culture. Woo was born in South Korea, and came to the United States at age 10. “I became a writer back in the sophomore year of high school, because that’s when I became a reader,” Woo said.  “During a period of English, our teacher shepherded us to the school library and told us to pick out a book to read.”

Ultimately, Woo did not read the book he checked out at the school library, Stephen Crane’s The Red Badge of Courage, but instead, devoured a Stephen King novel recommended by a friend. “What got me was King’s effortless, conversational style,” Woo said. “By the beginning of my senior year, I’d read most of Stephen King’s books, and by the end, I’d written my first novel, Between the Stitches, which nobody will ever read because it was worse than awful.”

Woo’s formal training as a writer began at Cornell University. “My first creative writing professor was Stewart O’Nan, who has kindly mentored me for almost 30 years and has also become a friend,” Woo said.  “I took every workshop I could, and then about 10 years later attended New York University’s Creative Writing Program for my MFA.”

Despite the years of writing and multiple publications since grad school, it’s still hard for Woo to wrap his mind around the idea of having a career as a writer. “So I take it a page at a time,” he said.  “A page I can handle, a page I can finish.”

Some of those first pages comprised Woo’s debut novel, Everything Asian. “I completed the first draft of Everything Asian before I embarked on my NYU MFA, in 2002,” Woo said.  “That was my plan, that instead of trying to write a novel during my MFA, that I would workshop chunks of the finished manuscript.”

After graduation, Woo spent two years securing an agent, and then two more years engaged in further rewriting. “Many, many revisions took place, including gutting the latter half of the book at the behest of my agent, who was 100 percent correct in her suggestions,” he said.  “Sometimes you just have to cut parts out, especially the ones you adore.”

In 2009, Thomas Dunne Books published Everything Asian, kicking off a cascade of activity. “The publication of Everything Asian resulted in me traveling to Washington, DC, to accept the APALA fiction award,” Woo said. “And many years later, it resulted in a second trip, this time to Skokie, Illinois, because they chose my book for their ‘one town, one book’ event.”

But the biggest rewards were closer to home. “I got to give a speech at a scholarship event of my old high school,” Woo said. “And maybe best of all, last year it was translated in Korean, which meant my mom and my family back in Korea could finally read it.”

Woo’s current book Skin Deep is a culmination of multiple experiences. “I actually started writing a mystery novel back in 1994, during my senior year of college,” he said. “I started this mystery because I liked mysteries a lot and was reading a bunch, Robert B. Parker’s Spenser series and Dick Francis’s horseracing-themed novels.”

Beyond genre, Woo’s choice of characters is also based in prior discoveries. “I chose a Korean-American adoptee as my heroine because on my first book tour in San Francisco, I met a group of adoptees who attended my reading,” he said. “Afterwards I read up on Korean transracial adoptees and never forgot about them.  Adoption was a theme of my second novel, Love Love, too, so I guess it’s something that I’m interested in.”

Despite three decades of experience as a writer, Woo continues to study informally by reading the work of other authors. “The writer I admire most is Richard Yates, who wrote with startling, disarming clarity about human frailty,” Woo reports.  “John Gardner’s The Art of Fiction should be a prerequisite for anyone pursuing writing. Not only are there technical gems, he discusses theory and morality in the profession, too.”

Woo has also begun to contribute to the conversation on how writers write, with his own CrimeReads post on how to write a mystery novel. And his fiction writing hasn’t stopped. “Because it took a while for Skin Deep to get published,” he said, “I was able to complete another novel in the meanwhile, a literary work about a writer and a painter titled Lines.”

If Woo seems to just take everything in stride as he continues to generate work prolifically, it’s because he describes his philosophy in life as one of having low expectations.

“Everything beyond Everything Asian has been gravy,” he said. “The world is much easier to bear that way!”