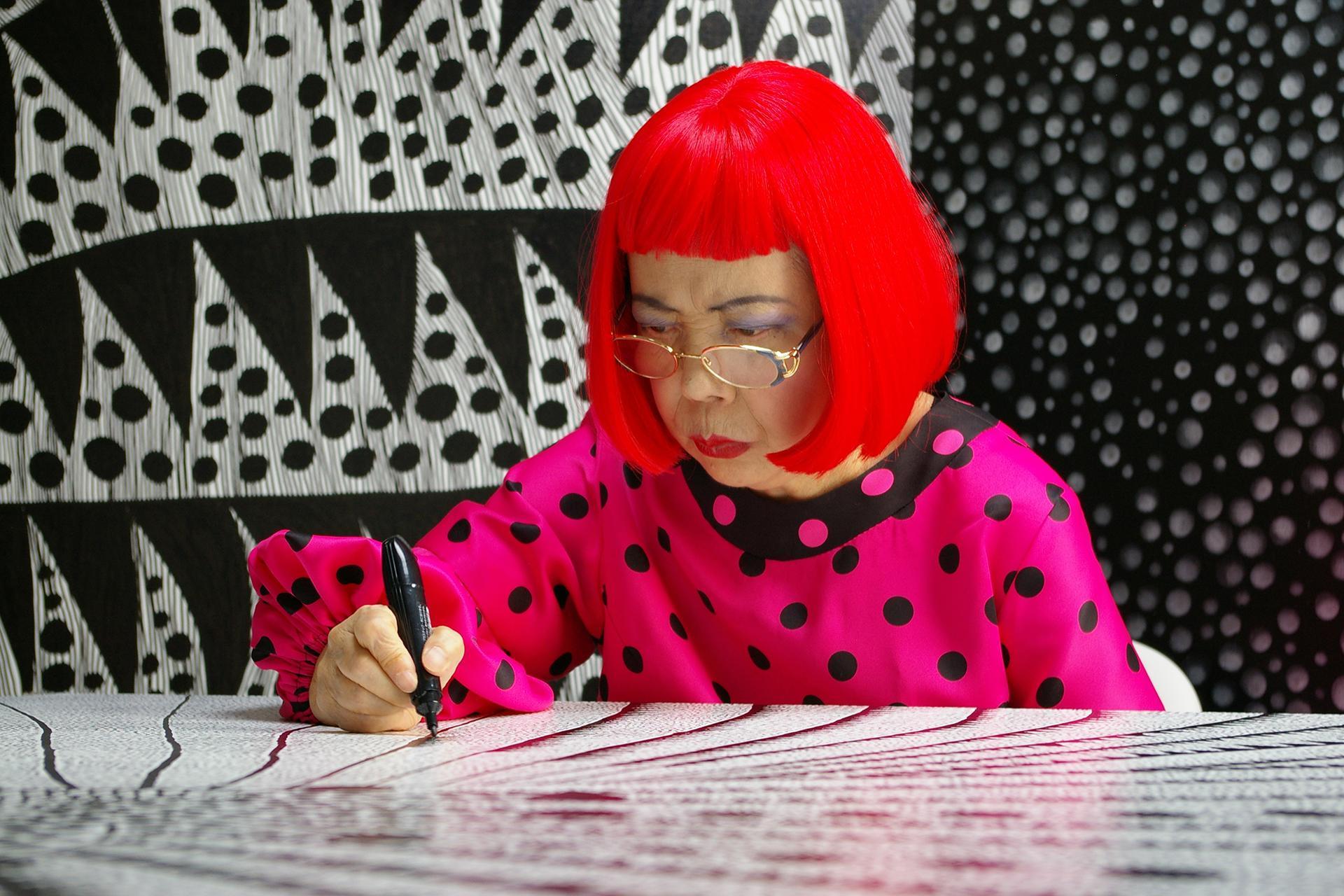 For her first full-length documentary feature, director Heather Lenz takes on octogenarian Yayoi Kusama, charting the highs and lows of a remarkable career from its humble beginning in a sleepy mountain town to becoming the most successful living female artist.

Born in 1929 to a philandering father and a mother staunchly unsupportive of her artistic aspirations, Kusama’s drive and stubbornness emerged at an early age. Her mother routinely tore from her hands drawings and paintings Kusama was working on; she persisted. Her parents tried to set up meetings with suitors; she rejected them.

Finding herself consistently shut out of the Japanese art community, Kusama moved to New York in the late 1950s only to face even more uphill battles. As a woman of color in a white man’s world, she had to be at least twice as good to get even the tiniest bit of recognition. Through sheer force of will she started getting her work into galleries and exhibitions, finally gaining some traction with the public and critics.

In many ways Kusama was ahead of her time, playing with soft sculpture, wallpapering repetitive imagery, and creating infinity mirror rooms before any of her white male contemporaries, yet the latter were the ones showered with praise for their ‘innovation.’

When the Vietnam War began, Kusama staged public ‘happenings’ against American involvement. The protests often involved nudity, which the press in the U.S. and Japan immediately seized upon as fodder to discredit her. Coupled with the lack of due recognition for her artistic accomplishments, her mental health deteriorated, and she returned to Japan in the early 1970s and voluntarily took up residence at a mental health hospital where she still lives today.

The 1980s signaled a revival of her career thanks to retrospectives held in New York and a push from well-placed individuals in the Japanese art world to show her work, particularly in the 1993 Venice Biennale. Kusama’s work, though it has evolved over time, has never wavered in its refusal to conform to convention or trends; in that sense her popularity is more a barometer of what the critics and the public want to see.

Under Lenz’s guidance Kusama: Infinity refrains from being a dry biography, instead forming a dynamic portrait of a woman who has always unapologetically been herself even when her family and her industry would have preferred a more muted version. By all means a ‘nasty woman’ by today’s standards, Kusama’s unwavering confidence in her own work and skill provide inspiration for all women plagued by self-doubt and adversity in the workplace.

Born Matangi Arulpragasam but better known by her stage name M.I.A., the English-born rapper and activist of Sri Lankan Tamil heritage has been at the epicenter of critical acclaim, public adoration and media ridicule ever since bursting onto the music scene in the early 2000s. Directed by first-time feature filmmaker Stephen Loveridge, Matangi/Maya/MIA’s debut at Sundance marks the culmination of years of work. A teaser trailer leaked online back in 2013 but was almost immediately pulled, leaving fans to speculate whether a final cut would ever see the light of day.

M.I.A.’s childhood was marked by the chaos of the Sri Lankan Civil War. Her father founded the Tamil resistance movement, resulting in the family’s move to India, and eventually back to England when she was ten. Living with her mother and siblings amongst other Tamils on a council estate, while her father remained behind engaged in the war effort, music became the bridge that pulled M.I.A. into the western world and culture.

She attended Central St. Martins College with a focus on film and visual art. From an early age M.I.A. fancied herself a documentarian, hence a significant portion of the film comprises footage from her personal archive. In 2001 she returned to Sri Lanka for a documentary project of sorts, which she found difficulty completing for personal and practical reasons. But what she witnessed there and the conversations had with friends and family would bear a strong influence over the music M.I.A. would begin to make upon returning to London.

Since her debut album dropped in 2005, M.I.A. has been a critical success. Journalists respond to her raw energy, the personal nature of her lyrics, and her genre-bending beats. Other sects of the media as well as the public, however, have not been as welcoming on account of the artist’s outspokenness when it comes to politics – particularly regarding Sri Lanka.

Unlike her contemporary Amy Winehouse, M.I.A.’s media attackers didn’t hail from tabloids. As the documentary shows, Lynn Hirschberg responds positively to the controversial music video “Born Free,” only to write a scathing New York Times Magazine cover story. Travis Smiley has M.I.A. on his show, but edits out her most politicized statements. The public backlash is swift and harsh; internet trolls criticize her for becoming mainstream and dating a wealthy heir; protestors carry signs calling her a terrorist. The irony, of course, is that all the privileged youth who frequent her shows at Coachella and other exclusive events are undoubtedly fist pumping and swaying to the beat without any understanding of the content and context of her lyrics.

Nevertheless, M.I.A. remains uncompromising in her art and her beliefs. Though the film never mentions this, it doesn’t take a stretch of the imagination to note that high-profile male artists who speak their minds on politics and current events are not vilified in the same way. As intimate as the documentary is as biography and coming-of-age story, it also inherently poses the question of what the role and duty of an artist are in today’s internet and celebrity-driven culture, where every move can be replayed, magnified and scrutinized.

Regardless of whether or not one agrees with M.I.A.’s politics, it is undeniable that she has changed the game, making her a much more suitable role model for today’s young women than the cookie cutter pop stars who take their millions and keep their mouths shut.

Curious and expressive since childhood, director Sandi Tan grew up feeling oppressed by Singaporean society and frustrated by how difficult the government made it to access the music and films that spoke to her as an adolescent. In high school, Tan and likeminded peers Jasmine and Sophie became proteges of enigmatic expat film instructor Geroges Cardona. With his support and blessing, the trio began production on Shirkers, a Singapore-set road movie, in the summer of 1992.

Tan performed double-duty as screenwriter and lead actress; Cardona directed; Jasmine and Sophie produced, securing everything from camera equipment to funding. It was a hodgepodge effort cobbled together by passionate individuals with only the vaguest notion of what they were doing. Yet just as production was reaching its climax – seventy reels shot, an original soundtrack recorded by a friend, ten thousand dollars needed to finish off the project – Cardona disappeared, taking with him all physical traces of what they’d accomplished.

For years the specter of the film that almost was haunted the trio, particularly Tan, for whom the script was highly personal, and because she once considered Cardona to be a great friend and mentor. Over two decades after that fateful summer, Tan receives a letter from Cardona’s ex-wife notifying her of his death. She asks Tan if she wants all the Shirkers paraphernalia. Why had he kept it all that time? And why had he taken it in the first place?

The resulting film, combining original Shirkers footage with Tan revisiting those involved in the production, often feels precious and self-indulgent, but the mystery of who Cardona actually was and how he came to wield such influence over aspiring filmmakers is seductive and engrossing. The scenes from the 1992 shoot are hypnotic in all their saturated graininess, particularly for those who only know Singapore as the sleek metropolis of today.

No doubt the movie as Tan envisioned it as a teenager would have found a place in the canon of Singaporean and Asian film history, but the iteration of Shirkers that she has crafted as an adult stands as testament to the necessity of the arts for the youth, and what happens in places where access to them and self-expression are not free.