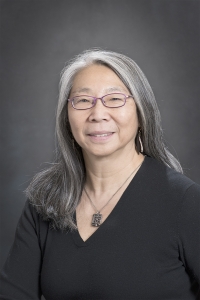 A longtime fixture in the ID and community development circles, Taoka recently retired, and won one of this year’s Lifetime Achievement Community Voice Awards. What better occasion to hold forth on her accomplishments?

Talking to her is easy. Reserved but warm, she gives an impression of inner balance, of quiet generosity. Taoka has the stillness of a skilled negotiator, self-composed in a way that calms you. The problem is, when you ask her about herself, she ends up telling you about other people.

Here are two stories that Sue Taoka told me.

One is about meeting the legendary activist Bob Santos. In 1971, as a college student, Taoka was invited to the White House Conference on Aging. She’d never been out East, wasn’t even sure how to dress. She recalls standing in the hotel, staring at a chandelier, amazed.

“You could really tell I was a country bumpkin,” she says. Then Uncle Bob walked up.

“You must be Sue Taoka, from Colorado,” he told her. She wondered how he knew. “Sister, you’re coming with us,” he said, and took one elbow, and Jim Miyano, an L.A. activist, took the other. Together they carried her off to a caucus meeting, her feet flailing. Santos became a mentor, keeping in touch until she moved to Seattle.

The second story comes from move-in day for Phase 2 of the ID Village Square development, a project she’d worked on for years. Taoka met a little boy, who was getting his own room for the first time.

“Know what’s even better?” he said. He took her hand, and led her to the complex’s branch library. “Now I get to come and read books here.”

These are good stories. You might have heard them before. Taoka shared the one about Uncle Bob in this very paper after his death. But what’s behind them? In each one, somebody else appears, to guide her along the way.

In 1971, Taoka may have felt like a “country bumpkin,” but how many college students do you know who get invited to a White House conference?

Sure, she grew up in tiny Hudson, Colorado. Back then, the main drag, off I-76, was maybe a block long: “If you sneezed, you’d miss it.” Their family farm was five miles away, the nearest neighbors a half-mile off.

They grew sugar beets, carrots, corn, sometimes asparagus or beans—truck farming. They were tenants, but when their landlords retired, they sold them the property.

Her grandfather, uncle, parents, brothers and sisters all lived together, part of a community of Japanese Americans that relocated during the war. Taoka’s parents, who met in the Poston concentration camp, grew up in Central California—Salinas and Hollister. Her dad swore never to go back. He never did.

Growing up, Taoka says, “We were always thinking about equity, and fairness, and what’s right.”

What transformed those ideals into activism? “I think it was the Vietnam War,” she reflects. “When a friend, who was Latino, was killed. It hit us all pretty hard.” Mauro Martinez was the brother of a high school pal. He’d sacrificed himself to save others, they learned. Fifty years on, the memory still chokes her up. “I became pretty engaged in the antiwar movement,” she says.

At college in Boulder, she continued her activism, and became close with a group of progressive Native Americans. She graduated and moved to Denver, working in restaurants and grassroots organizing. They started a taiko group, learned to make drums, and developed the Denver style: “We did things barefoot, and were far less formal than anybody else.”

She met Min Yasui, the attorney who fought Japanese American incarceration up to the Supreme Court. “Min and I had our battles, but I respected him a lot,” she says. “When I went to tell him I was off to law school, he was very supportive.”

Law school allowed her to develop new skills for an evolving movement. She came to Seattle University, looked up Santos, and said, “You promised me a job!” Her J.D. was useful, but she never practiced law.

Taoka hadn’t intended to stay in Seattle, but the community changed her mind. There was Santos, and Donnie Chin, and all the ID old-timers—like Jack, a Japanese gardener, who told her about pounding layers of metal into beautiful swords. She loved that the neighborhood made elders feel safe and welcomed. She did, too.

“I’m not sure that’s always true for folks, to be able to come into a community and be welcomed,” she says. “That’s why I stayed.”

Santos introduced her to Dicky Mar, her husband. They raised two kids, Emiko and Isamu. She worked on the expansion of the Danny Woo garden, and made more friends, including the Woo family, and Norm Rice, who made her deputy chief of staff when he was mayor.

The job taught her a lot about how things get done in a city. “I also learned that I wasn’t really a good city employee,” she says. Her opinions could be too strong for the compromises a mayor had to make. When Santos needed a project manager for Village Square, she and Rice agreed a change would be best.

“To this day, he’s a good friend of mine,” Taoka says, smiling. “I feared that if I stayed, we wouldn’t be!”

Other highlights included working at Craft3, a nonprofit, to figure out how to make loans to orthodox Muslims that complied with sharia law, and helping found National CAPACD, a national API coalition for community development.

Working with Santos, whom she followed as executive director at Inter*Im and SCIDpda, taught her problem-solving from a “people perspective.” “He’d allow and encourage others to be fist-pounders, so he could be the negotiator,” she says. “He could see how to create a win-win, so people could save face.”

When various leaders first came together to develop the ID, he told her, they agreed to take care of seniors. “For the community to grow, you had to build all levels of housing,” she says, “but low-income housing for seniors would be hardest, so that had to go first.”

For Taoka, this collaboration made Seattle special. She mentions the Gang of Four, the legendary group of community leaders—Santos, Bernie Whitebear, Roberto Maestas, and Larry Gossett. She was inspired by how people supported each other, making more for everyone.

“What I remember are the people and their stories,” she says. It takes me a while, but I finally get it—why others, like the little boy at Village Square, are always the heroes of her stories, showing her what’s important.

What does it mean to tell the story of your life through other people? It must mean that you are very fortunate, and very accomplished. As she leaves, Taoka mentions looking forward to Ron Chew’s memoir. Of course, I tell her she has to write hers, too.

Sue Taoka’s story is the story of a community.