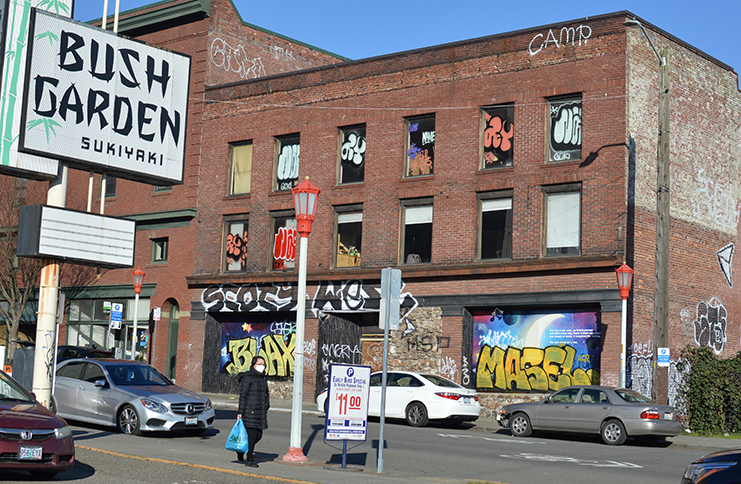 Developer Vibrant Cities has argued for over three and a half years, based on reports from structural engineers it commissioned, that the Bush Garden building is so structurally unsafe and poorly built that it cannot be retrofitted and must be demolished as part of the developer’s proposed 17-story project named Jasmine.

A new report challenges this claim for the first time, arguing that the historic building can be improved and preserved like other buildings of its age and type. The report was written by Dan Say, Principal of Swenson Say Faget (SSF) Structural Engineering, and commissioned by Historic Seattle, which has consistently argued the Bush Garden building should be preserved and not demolished.

The report became the main subject of a February 22 briefing before the International Special Review District (ISRD). After the last briefing on the Jasmine project in August 2021, the ISRD board agreed it needed no further information about plans to demolish the Bush Garden building, allowing Vibrant Cities to move forward with further design proposals.

Vibrant Cities and its design partner, Otak, came to the meeting hoping the Board was ready to focus the discussion on massing options in the project, as well as a new plan to provide double the amount of community space and retail, over the first two floors.

Most of the almost three hour meeting was focused on the new report, prompting frustration from the design team. “We thought we settled this issue at briefing number four,” said James Wong, CEO of Vibrant Cities, during the meeting. “When does this process end?”

Still, only two ISRD board members said they needed more information about the building’s salvageability following the report. The Board took no action during the briefing. It will vote to approve or deny the complete application for the project – and possible demolition of the building – at a future date.

Celebrated as the first karaoke bar in the U.S., and over the years as a hub for the Japanese American community and a gathering spot for activists, Bush Garden restaurant and bar has been closed since January 31, 2021. Bush Garden business owner Karen Akada Sakata plans to relocate the business to Uncle Bob’s Place, a housing project scheduled for completion in 2023.

The building was constructed in 1910 as the Elgin Hotel, designed by Seattle’s first Japanese American architect Sabro Ozasa, who also designed the Panama Hotel. The two upper floors were added in later years.

Soon after the Jasmine project was first presented to the ISRD board, Bruce Zhong, Structural Engineer at DCI, conducted an analysis of the building and concluded it would not hold up well in an earthquake due to weaknesses. These included rotten wood framing, walls made of poor material and deteriorating bricks. The addition of the upper two floors in 1913 caused the underground slab to crack and warp, he said. Added to this, poor soil conditions under the building made it difficult to retrofit. “It’s just like three blocks of legos just put on top of each other and no glue on it and without a solid base,” Zhong said during the February 22 briefing.

Zhong and Gary Reddick of Otak, the project’s architecture team, have said at previous briefings that while they always favor rehabilitating historic buildings, it would be unfeasible and too costly to do so with this one. Demolishing and then rebuilding the entire building would be the only way.

Historic Seattle, which specializes in rehabilitating historic buildings, has consistently argued the building could be saved, and commissioned Say of Faget Structural Engineering to take another look. The firm specializes in seismic assessment and retrofit of buildings.

“There is nothing unusual or risky with using traditional retrofit measures to improve the seismic performance of this building,” Say wrote in his report, provided to the ISRD Board and obtained by the International Examiner.

Based on reviewing photos in a DCI report from early 2020, Say believes what DCI describes as rot in the floor framing is actually water damage.

While DCI found that the exterior walls are in poor condition and not strong enough to withstand an earthquake, in Say’s opinion, the original construction of the building is “similar to many buildings I have reviewed in the Seattle area,” and the loss of mortar and worn down bricks are normal.

“The notion that the bricks would need to be removed and re-built is not accurate,” Say wrote. “The suggestion that the brick walls would need to be strengthened on one of both sides is an over-reaction. Traditional URM walls repairs, and strong backing are the likely remediation approaches. These are common solutions to URM bearing walls experiencing deterioration.”

A report from DCI says the building’s foundations are stressed from the weight of the upper two stories added later, and show slab settlement – the sinking of concrete slabs because the soil below can’t bear the weight. But Say said if this were true, cracks in the building walls would be visible.

According to Say’s analysis, not enough information was explored about the building’s foundations. A Seismic Review Report by Coughlin Porter Lundeen from January 2017 suggested the building could be supported on piles. According to Say, “if the existing building is confirmed to be on piles the capacity of the foundation is greater than suggested in the DCI report.”

A report from DCI explored what it would take to preserve the building. Its portrait of the condition “only serve[s] to fan the flames for a demolition recommendation,” Say wrote. “The proposed methods result in an impractical and unaffordable scenario, which certainly would support the demolition proposal. In our professional opinion, less heavy – handed alternatives are available since the building is not in the fragile state depicted in the report.”

In conclusion, Say wrote: “The condition of the existing building does not appear to limit the ability to make seismic interventions that are typical for buildings of this age and construction type.”

Say’s assessment was based on previous ISRD briefings and reports commissioned by Vibrant Cities, including seismic assessments and rehabilitation recommendations. Say also visited the site and looked at the building exterior, but building ownership denied him entry to review the interior.

Zhong of DCI Engineers provided a response letter to the ISRD Board arguing that Say’s analysis was faulty because it was partly based on observing the building from the outside. “[W]ith my 30 years structural engineering experience, I would never make recommendations on building safety by just walking around the building from the public right-of-way,” Zhong wrote. “Our conclusion is that this old building is not safe and extremely difficult to be rehabilitated. The normal retrofit methods SSF have used in the past will not work.”

Responding to the report from SFF, Reddick said during the briefing: “We’re very, very comfortable with the position that we’ve had for some time. We have the benefit of having been in the building firsthand.”

ISRD Board member Ming Zhang said he trusted DCI’s structural analysis. “To me it’s very common sense: This structure is not safe at all,” he said.

Board member Lizzy Baskerville said the new report made her rethink the feasibility of rehabilitating the building. She said she would like a fuller report, and asked why Say was not allowed in the building. “Basically the rebuttal letter is stating that this engineer doesn’t have the full information to make an assessment because they weren’t allowed inside the building,” she said. “So maybe we ought to let them inside the building.”

Wong replied that the building’s condition would create a safety liability. He added that because Say was commissioned by Historic Seattle, “they have competing interests, and it’s not unbiased.”

Board member Matt Fujimoto also said he wanted more information about the proposed demolition, given the new report, and that the developer should let SFF follow up with a more detailed memo “and put this to an end.” He said the Board is charged with discouraging unnecessary demolition. “Given that we have somebody’s new opinion, who is an incredible expert – who has said that perhaps the building is a viable candidate for seismic retrofit or some parts of it are – I think it’s important to follow up on that and have that information presented to the board.”

Board chair Andy Yip suggested the board could select another, independent analyst to investigate the building, but ISRD coordinator Rebecca Frestedt responded that the Board cannot do this.

Board members Zhang and Nella Kwan said the board should not delay the Jasmine project further, as the empty building made the neighborhood feel unsafe.

The board expressed excitement about the proposed two floors of community space in the project. Baskerville and Zhang suggested the lower floors have masonry or brick on the outside to honor Bush Garden.

Baskerville said the 17 stories seemed out of scale with the surrounding neighborhood.

In a letter to the Board, Historic Seattle echoed this: “[T]he 170’ high tower stands out jarringly and does not relate to the neighborhood or to its immediate neighbors.”

Many letters and public comments to the board expressed concern about demolishing the Bush Garden building, pointing to its historic significance, and lamented the prospect of Jasmine as a new large market-rate housing project in the neighborhood. Affordability of projects falls outside of the ISRD Board’s purview.

Nina Wallace, a longtime worker in the neighborhood, urged the Board to reject a demolition of the building, citing SFF’s new report. The building “has been a home, a gathering space, and an organizing hub for generations of the CID community,” she said. “Demolishing the building to replace it with luxury housing inaccessible to the vast majority of CID residents and community members is an affront.”

In a statement, InterIm Community Development Association argued that existing small businesses will not benefit from “an influx of new more affluent neighbors with different tastes,” and that the project will help raise property values and rents, contributing to “physical, economic, and cultural displacement.”

InterIm said that the building is similar to other historic SRO hotels that were included in the National Register designation for the neighborhood, and should have been included. The letter quoted Dr. Marie Wong, author of Building Tradition: Pan-Asian Seattle and Life in the Residential Hotels: “It is as important as any of the SRO buildings that currently make up the greater share of structures in the CID.”

The design team plans to present a new briefing to the board at a future date.