No matter how many times you hear the story of how the Danny Woo Garden was created in 1975 it never stops inspiring. It’s a tried and true classic among all the stories of social justice and community activism in the history of Chinatown-International District. The story of the garden is a direct reflection of the strength of the community.

Bob Santos, Executive Director of InterIm CDA, had worked tirelessly in the ’60 and early ’70s to fight gentrification and displacement of the low-income, immigrant, and refugee individuals and families by securing property for affordable housing in the neighborhood. After preserving homes for thousands of people in the neighborhood, he heard from the Asian and Pacific Islander elders another necessity that was void in need of filling in the International District—a place to garden. He rallied again to make it happen.

Santos made the famous “dollar a year” deal with businessman Danny Woo, and then organized hundreds of volunteers and activists to build a community garden as a place where the neighborhood’s elders could grow culturally relevant fruits and vegetables. One of Seattle’s first community gardens, it became a source of food security, cultural pride, community building, and 41 years later, still is today. Its value and impact are felt by all who visit, but there is no other truer testament to how critical the garden is to physical and mental well-being than hearing from those who garden here.

These stories were adapted from interviews conducted by youth from ACRS’ Job Readiness Program who worked alongside Danny Woo Garden gardeners in the spring of 2016. Youth developed interview questions, conducted interviews with the elder gardeners, and translated their stories into English. This was a special project as part of the intergenerational programming that takes place in the garden. 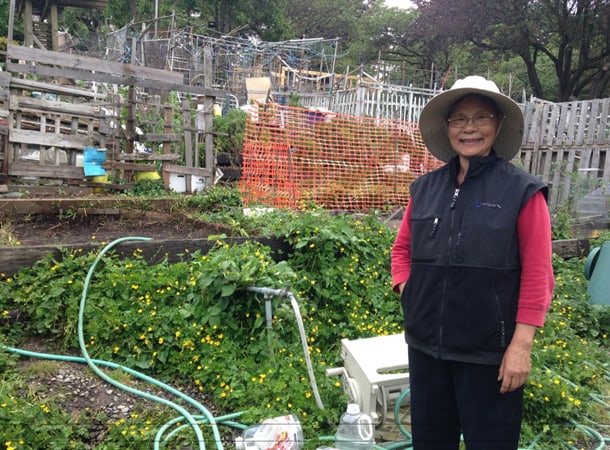 Ms. Lai was a career farmer in her home country of Hong Kong. After moving to Seattle in 1993, she felt very homesick for her friends and family back in Hong Kong. She took whatever opportunity she could to visit home and stay connected to her roots. Through the years however, she was able to build a community within Chinatown-International District and noticed many of her new friends were growing at the Danny Woo Community Garden. In 2015, she joined them, and she has recently relocated to a plot that neighbors one of her closest friends of over 20 years. Ms. Lai treats gardening as her daily form of exercise. She loves planting potatoes, lettuce, and squash. 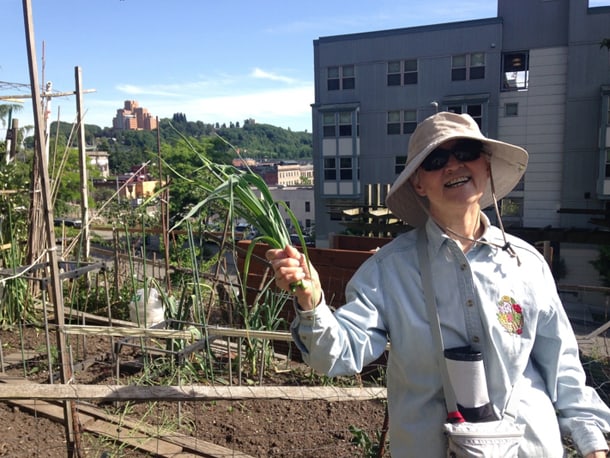 Ms. Shan has been a member of the Danny Woo Community Garden since 2011 when she began growing alongside her husband. She grows chives, tomatoes, leafy greens, and squash. Prior to immigrating to the United States in 1988, Ms. Shan spent over five decades in Beijing working in corporate communications. Although she’d never had her own edible growing space before joining the Danny Woo Community Garden, she has fond memories of spending time on her grandparent’s farm in China.

In recent years, Ms. Shan’s husband’s battle with cancer has prevented him from visiting the garden as frequently as he used to. She said that when he is able to garden alongside his wife, the sunshine and fresh air bring him so much joy. Ms. Shan often walks to the garden from her home which is a two to three mile walk. “Sharing makes me healthy, and long days in the sunshine gives me health.” 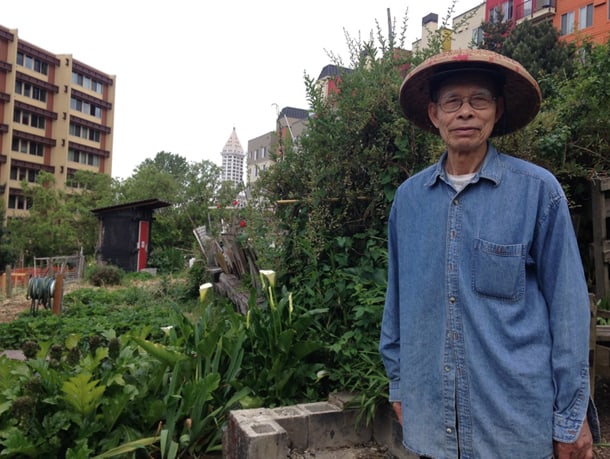 Mr. Liu started planting at the Danny Woo Community Garden four years ago. As a resident of Chinatown-International District, Mr. Liu often visits the garden twice a day whenever he feels bored at home. He is happiest when he is able to harvest from his garden, especially when his beans are ready. He likes spring time the most because it marks the beginning of the growing season.

Mr. Liu started growing at the Danny Woo Community Garden three years ago, through the encouragement of his children. After a series of health ailments, he decided to look for a place to be more physically active in his neighborhood. Working in the garden everyday has been an important part of his journey to restoring his health. Mr. Liu is often in the garden with his wife, who loves to grow alongside him. 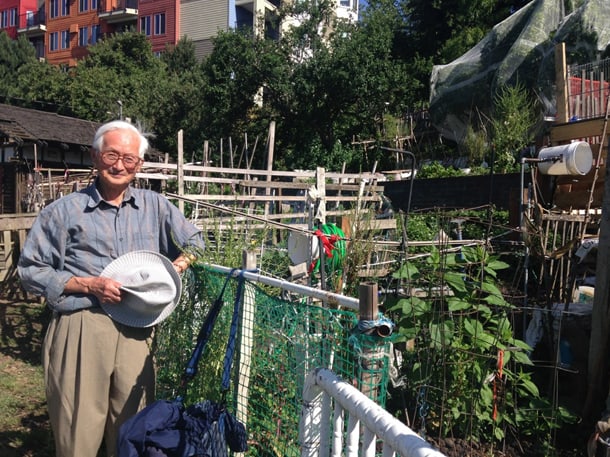 At 92 years old, Mr. Pan is one of the most senior gardeners in the Danny Woo Community Garden, and has seen the garden grow and change since first setting down roots at the garden in 1996. Mr. Pan’s long career as a Design Engineer in China taught him how to optimize his small growing space. On a tour of his plots, Mr. Pan proudly pointed out the 20 varieties of fruits, vegetables, and flowers he nurtures during his daily visits to his garden plot, a 15-foot square space with roses, lettuce, sweet potatoes and much more. Unlike the majority of the gardeners, Mr. Pan lives outside of Chinatown-ID. He said that commuting to the garden and making time to be outside is his top priority. 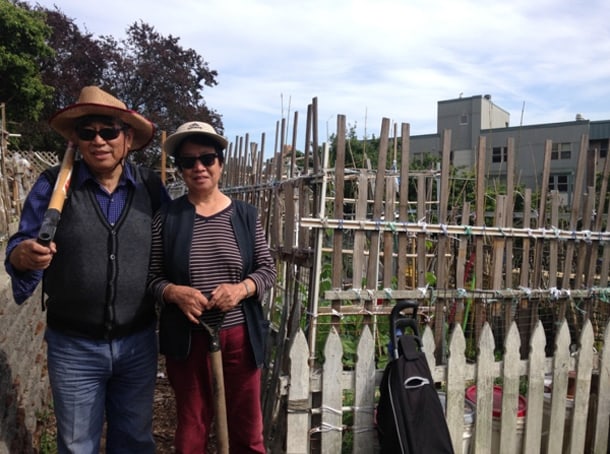 Mr. Wu has been gardening since 2014. Before his days as a gardener, Mr. Wu was a teacher, which is where he first discovered gardening. After leading children’s lessons in the garden he says he realized how amazing it was, so he started planting at his home in China. In his garden plot in the Danny Woo Community Garden, he treats the plants as his children. When he is watering them it reminds him of feeding his children. He likes organic food because it makes his body healthy and he believes gardening is good for his body. He also appreciates that gardening helps him stay trim and physically active.

This past summer he planted beans, eggplants, chilies, and greens. Mr. Wu and his wife, who is a volunteer with a local Chinatown-International District social service agency, go to the garden together to water, weed, and tend to their plot. 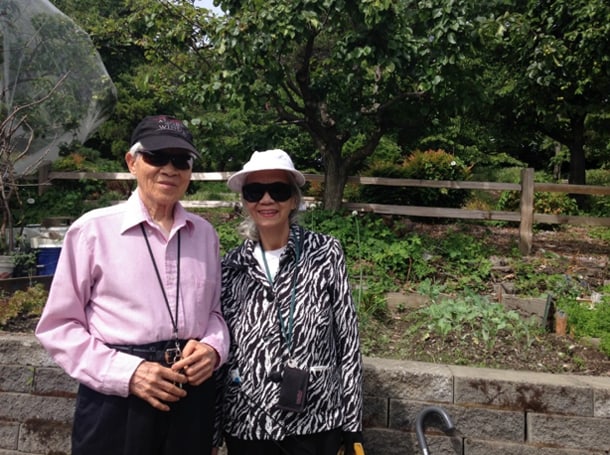 Ms. Tran and her husband are two of the newer gardeners to join the Danny Woo Community Garden. She had been on the gardeners wait list, a list of over 40 people long, for two years. She and her husband have been long-time residents of the Seattle area, since escaping the communist regime in Vietnam by boat in 1985. In the United States, Ms. Tran’s husband worked as a farm laborer, harvesting rhubarb and berries for many years.

Now in their retirement, Ms. Tran and her husband have acquired one of the highly sought after plots at the Danny Woo Community Garden, where she plans to grow greens, flowers, and squash. She and her husband haven’t had a place to grow food since moving to their small apartment in Chinatown-International District. 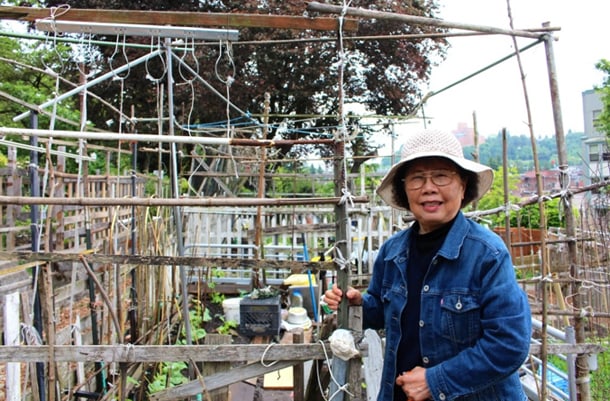 Ms. Chen has been gardening at the Danny Woo garden since 2005. Before obtaining a plot at the Danny Woo Community Garden, she worked as a doctor and had never gardened before. Over the 11 years that she’s been in the garden, she says she developed a green thumb by learning from the garden managers and her fellow gardeners.

Ms. Chen said that being able to garden at the Danny Woo Community Garden gives her so much joy. Her favorite thing to grow is green beans and she loves to be in the garden in the summer. She is a firm believer that planting is good for both her health and the environment. Ms. Chen also takes care of garden insects and has built some nests for the bees.

When she is out in the garden, she enjoys the fresh air and the blooming flowers. Her favorite fruit is the Asian pears that grow in the orchard that line her plot. She plants organic vegetables rather than non-organic because she says she feels these are better for her body. She loves that gardening gets her out of her home and keeps her physically active.

Number of plots and gardeners: 100 plots and 70 gardeners (approximately)

Number of youth/children per year who participate in educational programming: 125

Number of visitors per year: 5,000 (approximately)

Number of people who live in Chinatown-ID: 3,500

Percentage of residents over 55 years of age: 42%

Percentage of residents in Chinatown-ID who speak little to no English: Over 50%