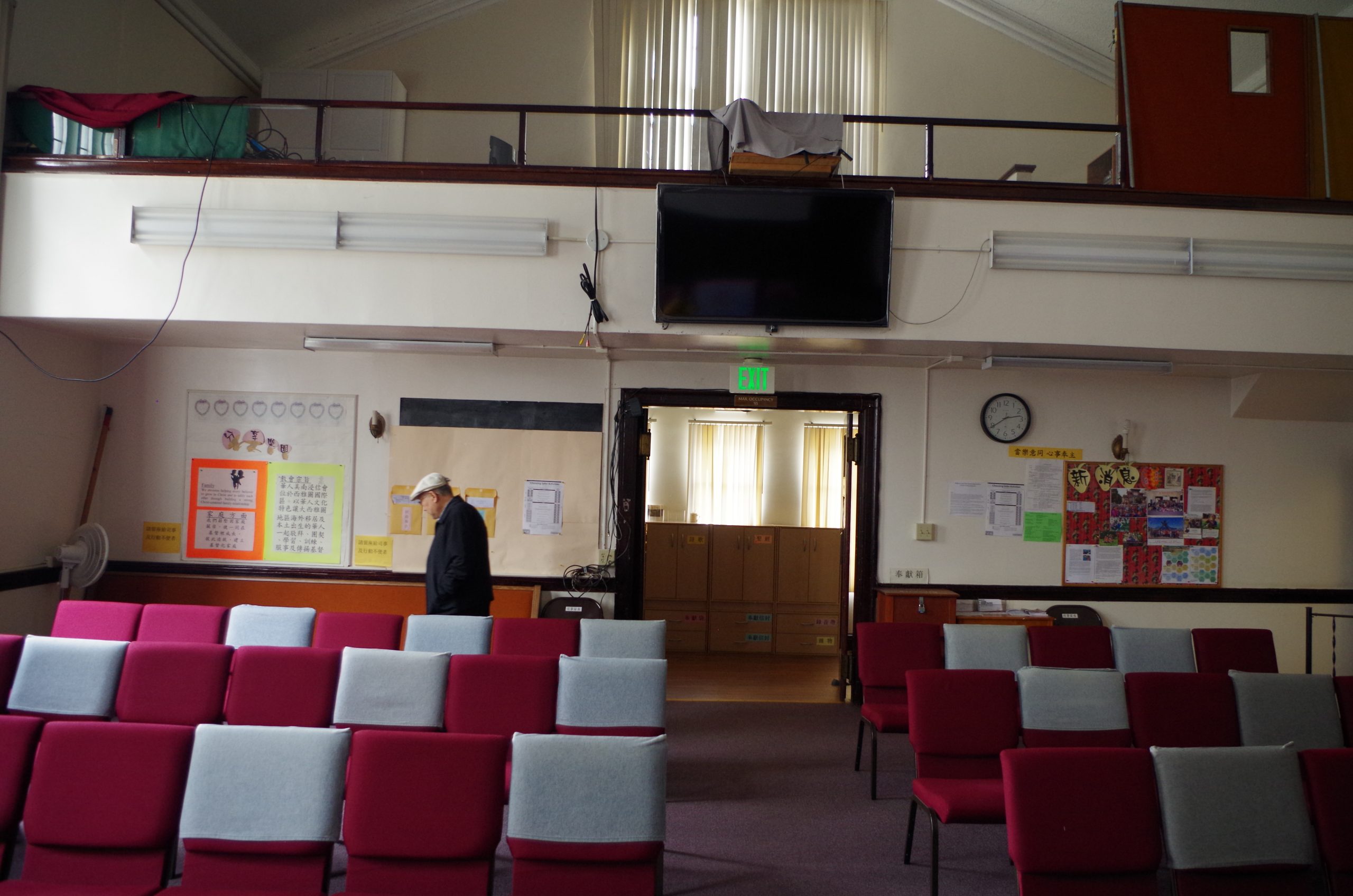 This is the third installment of an essay series annotating and exploring the intersection of history, architecture, and activism in the Chinatown International District.

Pastor Andrew Ng answered the doorbell of the Chinese Baptist Church building on the first ring. Wearing a dark jacket, slacks, and a tan flat cap, he ushered me across the threshold into a small side room. The room had one table at its center, surrounded by mismatched chairs and Chinese texts. There was no small talk, much to my delight.

“You’re Chinese? We have the same family name,” he said. “Do we? I don’t think we do,” I responded. “But yes, I am Chinese.” We establish that no, we don’t share a name, but his nearly imperceptible nod at my being Chinese permits him to settle back comfortably in his seat to eye me quizzically.

Me, a disillusioned Asian American atheist in conversation with a Hong Kong-born elder whose life is dedicated to ministry and faith in and through Jesus Christ. Interesting, I thought. So our exchange began.

The Chinese Baptist Church, now home to the Chinese Southern Baptist Church where Ng serves as senior pastor, was completed in 1924, designed by architectural firm Schack, Young and Myers in a Late Gothic Revival style, a romantic adaptation of medieval architecture.

“An artist can’t help but express themselves,” said longtime and recently retired local architect Dave Letrondo. “Back then, it was all about patriarchy and the power of God, so the architecture was designed to invoke awe. Often when you enter these buildings, you think, ‘Wow, a lot of people put their blood, sweat, and tears into this in praise of God.’” The church’s 1986 National Register of Historic Places nomination form reads that the building retains a “high degree of interior and exterior integrity” and describes that the church’s nave “presents a simple but dignified profile.”

That same year, 1986, Ng arrived from Hong Kong by way of Texas and Vancouver B.C. His denomination had operated out of a smaller space in the neighborhood until they purchased the Chinese Baptist Church, renovated it, and moved in on Easter 1987.

“When we first started, we shared the church with Black and Filipino congregations,” Ng said. “But there wasn’t enough space. Fortunately, or unfortunately, the Chinese one grew fastest.”

He soberly joked that he’s glad I’m interested in the church because it likely won’t pull through the next “Big One.” I suspect he’s correct. Yep, you guessed it, it’s another unreinforced masonry building.

“It has already survived some 100 years of earthquakes,” said Letrondo. “To get it up to code, they’d need to put in sprinklers, steel beams, columns, and cross-bracing for it to take the seismic load.”

Indeed, the church has survived more than just earthquakes.

When Chinese workers arrived in Seattle as early as the 1860s, the group came to represent an important part of the city’s cheap labor force in railroad construction, road building, coal mining, lumber mills, fish canneries, hop picking, and other labor intensive projects. Many Americans blamed their declining wages and economic status on the Chinese, reinforcing intense labor competition and a desire to maintain “white purity” in the American West.

In 1882, the U.S. Congress enacted the Chinese Exclusion Act, suspending the immigration of Chinese laborers. The law was renewed three times before being repealed in 1943. The escalating threats across this region prompted many Chinese to flee. Their fears were confirmed beginning on February 7, 1886, when a white mob violently expelled Chinese residents from Seattle by boat.

That event, now known as the Seattle Riot of 1886, combined with the growing anti-Chinese sentiment, left the Chinese quarter severely damaged. Only a few dozen Chinese remained, and the community didn’t recover for several decades, wrote Phil Dougherty in an essay for HistoryLink.org.

“The Rev. A.B. Banks on receiving word during a worship service that a racist mob was gathering to attack Chinese immigrants, pronounced the benediction, grabbed his rifle, and rushed off to join the Home Guards defending the Chinese,” reads the Beacon Hill Church website, formerly the Chinese Baptist Church. That congregation, established by the Seattle First Baptist Church in its effort to create ethnic missions, dates back to the 1890s with its original membership consisting mainly of Chinese workers who chose to stay in the city after the riots.

The Chinese Baptist Church initially operated in a house on 5th Avenue and Yesler Way, moved once more, before eventually raising funds to buy a lot and construct a new building at 925 South King Street, where Ng and I met.

The church grew to become a focal point of spirituality and acculturation for the Chinese community from 1924 until 1976, when the congregation relocated to its current spot on Beacon Hill. “Church members fondly remember the wooden slide on which children played, the church bell that rang when worship services ended, and many other symbols of church life in this much-loved building,” reads their website. Excluding the decade following the move, when it was used by several service organizations and then briefly as a warehouse, the building has always been a house of worship.

“For years, we had a children’s ministry and a lot of new immigrants,” Ng told me. “In addition to religious services, we had Chinese and English language classes. We really tried to reach the community.”

Partnering with the Chinese Christian Mission Gospel Center and the Asian Counseling and Referral Service (ACRS), the church helped new immigrants settle and secure jobs, leasing a portion of its property to ACRS for its culturally responsive food banks.

Today, Ng’s denomination has both English-speaking and Cantonese-speaking ministries. While Ng conducts Chinese services in the church, Pastor Matthew Zwitt does so in English in the portable next door. “Pre-COVID, the two groups gathered for joint services on special occasions,” said Ng. “Our Chinese side has more seniors, so they’re afraid to come back.”

Recurring themes of old versus young, tradition versus modernity, and Chinese versus English emerged as the pastor walked me through the church. I noticed these dualities reflected in the languages scrawled on whiteboards, in bookshelves lining classrooms, and even in the kinds of toys strewn across nursery areas.

“Change is good, but change for change’s sake is not,” Ng said. “Younger generations don’t care about history. They have a ‘me, mine’ mentality because of the culture. If you think you’re the best, you won’t go far. Pride kills.”

By this point, we’d made our way up a staircase and into a new room. I was out of breath. Ng was not. “I wonder if that will change,” I said finally. “Only if there is genuine faith. Faith isn’t just a cross hanging here,” he said, pointing to his chest. “What is it then?” I asked. “Life,” he answered.

As our time together concluded, I asked Ng about the church’s future. “If the next ‘Big One’ hits, it will not stay. If there’s a fire, it will not stay.” he said. “But this is Chinatown-International District. It must have a lighthouse, a church.”

Ng shared that they are struggling to maintain the Chinese congregation and offered his take on the Chinese Baptist Church changing its name. “They’re no longer called ‘Chinese’ and many churches are doing away with denominations.” He asked again if I see myself as Chinese. Chinese American, I replied. “Right. That is exactly it,” said Ng, nodding. “We don’t overemphasize denomination, but if one is distinct, you don’t want to please everybody and throw away your heritage. The English congregation is thinking of changing our name, too.” I surveyed his expression. “I take it you’re not in favor of that.”

The pastor looked up sharply, temerity etched across his face: “Over my dead body.”