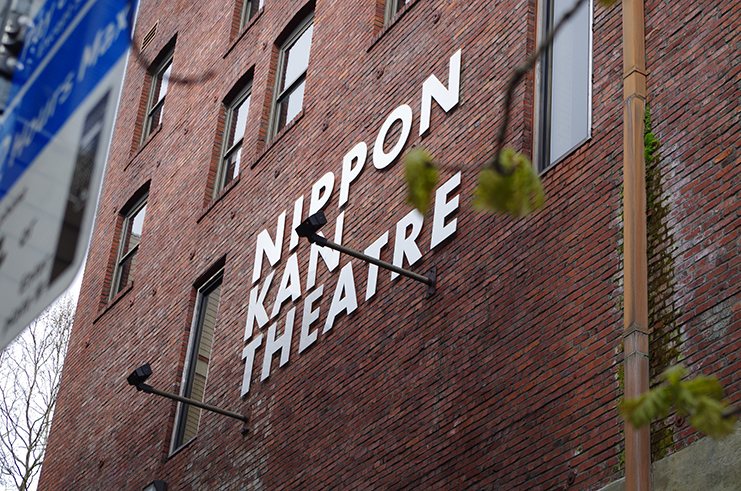 This is the second installment of an essay series annotating and exploring the intersection of history, architecture, and activism in the Chinatown International District.

Kathy Hsieh first entered the Nippon Kan Theatre in the early ‘80s to see a production of Philip Kan Gotanda’s “Song for a Nisei Fisherman,” a so-called dream play following an elderly man as he narrates and mimes his fishing technique, flashing back and forth in time. You can actually watch the play online. Hsieh, a well-known local theater artist and current Racial Equity in Grantmaking Strategist with the Seattle Office of Arts and Culture, was a University of Washington student at the time. “I just remember thinking, oh my gosh, this was one of the first plays that I’d seen that had an all-Asian American cast,” described Hsieh. “It was especially impactful watching it from the balcony, just seeing the intergenerational audience combined with the story being told on stage, and then enriched by the history of the Nippon Kan itself.”

Despite its inclusion on the National Register of Historic Places, tracing the precise history of the Nippon Kan is difficult because of extremely limited scholarship around the subject and the spotty availability of primary sources. Constructed in 1909, the mixed-use Astor Hotel building, which houses the theater, was designed by white architectural firm Thompson and Thompson for the Cascade Corporation, a community investment fund whose corporate owners included Japanese Issei Kuranosi Hirade and Matajiro Tsukuno. According to a case study written last year by Seattle University M.F.A student Stefanie Fatooh, ownership shares of the building were eventually sold to other Japanese community members. Fatooh explained that she chose to research the Nippon Kan for a class exploring cultural infrastructure and facilities.

“These buildings were originally designed for mixed-use,” guide Don Wong told a group of us on a recent Historic Hotel Tour at the Wing Luke Museum, which is located in another single room occupancy hotel built a year after the Nippon Kan. “They were western style, unlike in San Francisco, which changed the facade of its buildings to promote Asian culture and attract tourism. We didn’t do that here.” Yet unlike other mixed-use architecture of the area, the Astor Hotel building included the addition of a 400-seat performance space with a proscenium stage designed specifically to include a hanamichi or a runway extension for Japanese theatrical performances called shibai. For context, a proscenium stage is characterized by an architectural frame, often an arch, that separates the stage from the rest of the auditorium.

The Nippon Kan has not operated as a theater since 2005, when the building was sold to its current tenants. “Theoretically, ABC Legal Services, the company that owns [the building] does allow for tours and would let somebody come in and look around because they’ve preserved the back wall of graffiti that was there. It’s under some kind of plastic protective cover,” Fatooh told me. But when I called to arrange a visit, I was informed that tours were no longer available due to the confidential nature of the office’s work. Despite my not being able to see the interior, I did find out that the original proscenium curtain of the Nippon Kan currently hangs in the Wing Luke Museum’s Tateuchi Story Theatre. The curtain itself is decorated with colorful painted advertisements for Japanese American businesses in historic Nihonmachi, or Japantown.

When it first opened, the Nippon Kan was the cultural center of the Japanese community. “It was busy several nights a week with actors and musicians from Japan and included kabuki, movies, concerts, variety shows, judo and kendocompetitions, and community meetings,” wrote scholar Nayan Shah in a theme study of AAPI historic landmarks. Admission to most events in the space was “pay what you can.” A 1985 Seattle Post-Intelligencer article quotes Ryo Tsai: “Really, just about everything revolved around the Nippon Kan.” In 1991, Hsieh was cast in the Northwest Asian American Theatre’s (NWAAT) production of “The Wash,” another play by Gotanda, during which she grew close to local Japanese American icon, Tama Tokuda, who played one of the leads alongside fellow community pillar Harry Fujita. Both have since passed away.

“[Tokuda] invited me to her home and would show me old pictures, sharing stories of her experiences in the Minidoka Camp,” Hsieh recounted. “Some of the photos in her bedroom were of her dressed up in a kimono and makeup because she used to perform as a dancer in the late ‘20s at the Nippon Kan way back when she was a little girl.” Though Nihonmachi thrived in its early years as a self-sustaining economic community, the ethnic enclave struggled to overcome widespread white hostility, anti-alien land and immigration laws, and then finally, President Roosevelt’s devastating Executive Order 9066, which mandated the forced removal and incarceration of Japanese Americans from the West Coast in 1942. Consequently, the Nippon Kan, along with other Japanese homes and businesses in Seattle, went dark.

The only information I found about the period between the theater’s initial renaissance in the early 1900s and its cultural resurgence in the ‘80s was from an interview with Frank Fuji in a Seattle Post-Intelligencer article from 2005, which read: “After World War II, [Fuji] went to community meetings at the theater to demand government redress for the internment of 114,000 Japanese Americans, including his family, during the war.” Otherwise, it appears the theater remained inactive as a performance venue until it reopened in 1981, 10 years after Edward Burke and his business partner discovered it while scouting possible offices for their architectural firm. Burke described his decision to purchase and renovate the space, as well as the details of the renovation itself, in a memoir he wrote with his wife, Betty, titled: “Seattle’s Nippon Kan.”

Eventually, the Burkes nominated the Nippon Kan for the National Register of Historic Places in 1978. Though the Astor Hotel — renamed the Kobe Park Building — did not have any specific architectural distinction, its significance to the early Japanese immigrant community helped to secure its place on the register. “After the Burke’s renovated it, NWAAT was basically the resident company in the Nippon Kan under the artistic directorship of Bea Kiyohara,” said Hsieh. With her student group, Hsieh performed sketches in NWAAT’s annual “Community Show Off” event, a community-wide talent show. “I was so excited to actually do a show with the company that had presented ‘Song for a Nisei Fisherman.’ Almost anyone you can think of in the Asian American community with name recognition was a part of that event and often performed there.”

Hsieh, who went on to perform many times at the Nippon Kan in various productions into the 2000s, shared that there were several encounters with ghosts in the theater. “We did a production of ‘Romeo and Juliet’ that was set on the border between China and Siberia,” she said. “The actress who played Juliet kept hearing a little girl calling, ‘Mommy, mommy, mommy,’ and all of us got goosebumps because we could feel her fear. It was so palpable. We looked into the audience and searched backstage where she’d heard it, but there was no evidence of a little girl.” Then, later during a late night performance of a popular episodic soap Hsieh acted in called “Sex in Seattle,” another actor saw a pair of little pink shoes on the back stairwell. When he returned to the spot, they had vanished. No children were in the audience that night.

So, how did a cultural touchstone become office space? When Stroum Enterprises, a silent partner to the Burkes, announced they were selling the building in 2005, Uncle Bob Santos, then the executive director of InterIm CDA, made an offer that was too far below the asking price to make a deal. Fatooh’s paper described the theater as a “cautionary tale” of the kind of upkeep and funding required to maintain a thriving performance venue. “A lot of it also had to do with pure timing,” Hsieh added. “ABC Legal Services was willing to work with [NWAAT] to rent the theater as a performance space in the evenings and on weekends, but the reality was that it would’ve been a challenge. Then we talked to a whole bunch of different theater groups who, at the time, were looking for space, but no one could really afford that kind of cost.”

The Kobe Park Building is one of the unreinforced masonry buildings mentioned in a previous column, meaning that it likely would not survive a disaster. But as Fatooh wrote, “The Nippon Kan has seemingly been lost not once, but twice in its lifetime so far.” The significance of the theater isn’t predicated on whether it exists or not, but in what it symbolizes. I’m realizing how impossible it is to fully capture the 113-year-old history of a building, to really do it justice in a single piece of writing. Deciding what to include and what must inevitably be left out is a challenge. So much is lost to time. The ephemerality of buildings and living creatures is as frustrating as it is liberating. Perhaps the lesson here is in being OK with puzzling together the spine of a story rather than straining to understand every detail of the complete book.