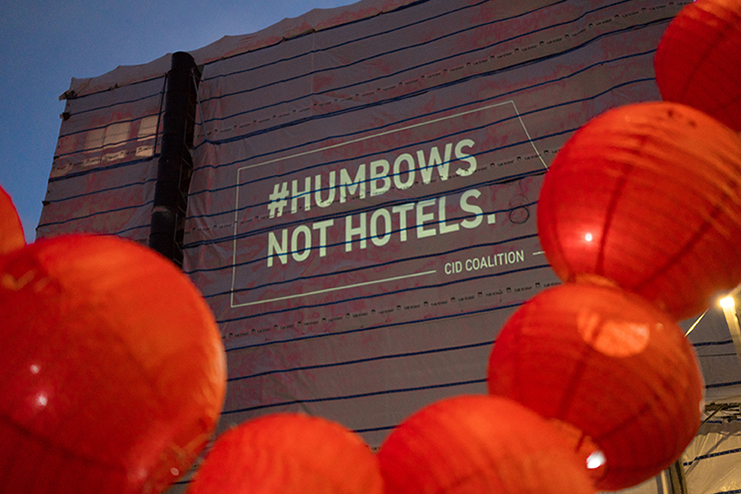 “We won’t be forced out,” “Stop gentrification,” and “Seattle is not 4 the rich” were projected in light on a construction site in the Chinatown International District (CID) May 25. The light projections, captured on video by filmmaker Matt Chan, were the work of the Chinatown Art Brigade, a collective rooted in Manhattan’s Chinatown, as part of a week of action addressing gentrification and displacement in Chinatowns around the U.S. and Canada. It was one of a few local Seattle events organized by the CID Coalition (or Humbows Not Hotels) “to call attention to predatory development encroaching on the Chinatown-International District and demand action from city officials,” coinciding with Asian Pacific American Heritage Month.

The event was intended “to address the displacement of longtime residents who rely on Chinatowns for low-income housing, culturally-competent social services, and community,” according to a statement from the CID Coalition.

As well as the Chinatown Art Brigade, the CID Coalition was joined by members of Got Green, and local residents and community members.

Community members in Los Angeles’s Chinatown marched May 26 against a development project in the neighborhood that includes no affordable housing, demanding a moratorium on developments neighborhoods needs, such as long income housing, is addressed. In New York, members of the Chinatown Tenants Union will organize to expand tenant protections in the city. Here is a full list of actions around the U.S. and Canada against displacement and for equitable development.

On Friday, May 31, the CID Coalition will hold an anti-displacement rally and march from 4 to 6 p.m. at Hing Hay Park. More details here.