The Dragon Painter, a 1919 film that will be presented by Seattle Theatre Group (STG) on March 6, stars Sessue Hayakawa as Tatsu, a wild young painter who lives in the mountains of Japan searching for his fiancé, whom he believes is a princess who has been taken by the gods and turned into a dragon. Tatsu’s talent comes to the attention of an esteemed elderly artist, desperate for an heir who, with the help of his daughter (Tsuru Aoki), convinces Tatsu he can reunite him with his beloved. The film was shot on location in Yosemite National Park. Long thought to be lost, a copy of the film was found in France, restored in 1988 and placed on the Library of Congress’ National Film Registry for significant works in 2014.

Bill Blauvelt: We have backgrounds in music, sound art, writing, film, dance and theatre and use that to explore experimental music and performance-based art. We use traditional Asian, Western and world instruments, found objects, children’s toys, and specially created sound devices along with vocals and spoken word. We’ve specialized in scoring classic and contemporary silent films since 1997.

IE: How did you get your start in all of this?

BB: I was working in lm and music for several years in the 1980s, which included joining Kingstreet Media, co-directing the film Beacon Hill Boys, and co-founding the Seattle Asian American Film Festival and Seattle Kokon Taiko. In 1994 I started working as a solo and collaborative musician on a variety of projects.

IE: So when did Aono Jikken come along?

BB:In 1997, after I had worked with innovative artists like Michael Shannon, Suzie Kozawa, Esther Sugai, and Yoko Murao, I decided I wanted to work collaboratively with them. I decided to name the new group Aono Jikken, a pun on my last name which translates from Dutch as “blue field” into the Japanese word Aono. Jikken is Japanese for “experiment” with a nod to Japanese composer Toru Takemitsu. He was once part of a collective of avant garde artists called Jikken Kobo. The group became interested in the idea of scoring Japanese silent films and our first one was A Page of Madness by Teinosuke Kinugasa.

IE: How many films has Aono Jikken worked on?

BB: Sixteen, including many classic Japanese silents by masters like Ozu, Mizoguchi, Naruse, and Shimizu and a silent Chinese martial arts epic. We’ve also scored contemporary Japanese films and work by Canadian director Guy Maddin which we toured to festivals in the United States, Canada, France, Brazil, Poland, and Peru. For the Maddin films we got to work with different orchestras, an all-star ensemble of Icelandic musicians, and actors like Isabella Rossellini and Geraldine Chaplin who performed as narrators.

IE: Any other kinds of projects?

IE: And what is a benshi?

BB: A benshi is a live performer in Japan who provides narration, commentary, and character voices for silent lm screenings of both Japanese and foreign films. They were once very numerous and some were so popular they became stars in their own right. After the decline of silent films the benshi mostly faded—except for a handful of hardy disciples who keep the art form alive. Aono Jikken’s benshi is Naho Shioya, an actor and performance artist who does a modern version of the style and performs bilingually in Japanese and English.

IE: What is it about Sessue Hayakawa that interests you?

BB: Sessue Hayakawa had an incredible career and an amazing life. He came to America to study economics at the University of Chicago where he quarterbacked the football team. After graduation, he fell in with a theater company in Los Angeles’ Little Tokyo where he was discovered. He was a Japanese immigrant to America in a time of anti-Japanese and anti-Asian sentiment but managed to become one of the biggest stars in Hollywood of the 1910s and 1920s.

He’s credited with becoming the first matinee idol for scores of American women with his performance in Cecil B. DeMille’s 1915 melodrama The Cheat. He parlayed that success into a career as an actor, producer, writer, director, and owner of an independent film company that produced 23 films including The Dragon Painter. He was lauded for bringing a more naturalistic acting style to American films. When things went bad in Hollywood he went to Europe and found success there in lm and on stage. When the Nazis invaded France during World War II Hayakawa was trapped there but used the time to paint and aid the French Resistance by sheltering downed Allied pilots.

When the war ended he was called back to Hollywood by Humphrey Bogart’s production company and began a late career surge playing what were intended to be just Japanese military villains in post war films. As he had done before, Hayakawa took stereotyped roles and gave them depth and complexity which culminated in an Academy Award nomination for The Bridge on the River Kwai in 1957. In the 1960s Hayakawa returned to Japan after the death of his wife Tsuru Aoki, retired from acting, and became a noted martial artist and Zen master.

BB: I’d love to do music and write and direct full time, instead of having a day job to pay the bills. I’d rather spend more time actually making art instead spending so much time writing grants and looking for support for Aono Jikken’s projects! It would be so great for our group to get more commissions and access to resources. 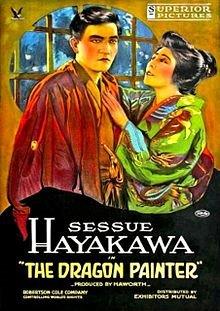 The Dragon Painter, a 1919 film starring Sessue Hayakawa, will be presented by Seattle Theatre Group (STG) as part of its silent lm series at the Paramount Theatre at 7:00 p.m. on Monday, March 6. Doors open at 6:00 p.m. Hayakawa was the first Asian American movie star to become popular in both the United States and Europe. Live music and benshi narration will be performed as part of a new commissioned score by the Seattle-based Aono Jikken Ensemble. The film will be followed by a post-screening discussion with AJE’s artistic director William Satake Blauvelt. Tickets to the event are $10 general, $7 students and seniors, and can be purchased at www.stgpresents.org.

They can be reached at www.facebook.com/aonojikken.