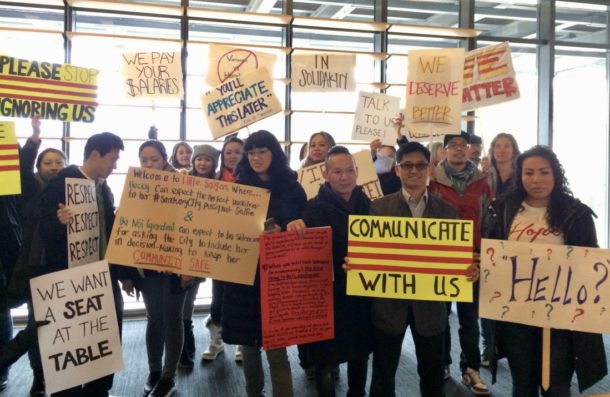 The following is a statement from Friends of Little Saigon regarding the Navigation Center.

On Monday, July 10, 2017, Mayor Murray emailed to the Navigation Center Community Task Force his response and supporting documents outlining the City’s plan in regard to the Chinatown/International District’s concerns about the safety, public health, economic and cultural impacts posed by the Navigation Center. Unfortunately, the City’s response is consistent with their long-standing disrespectful attitudes and behavior toward the CID.

The Mayor’s response to the Community Response Plan failed to directly address the community’s concerns. Rather the content refers to past efforts and conversations that lack financial or implementation commitments.

In good faith, the Community Task Force worked diligently to collect and advocate for the needs and concerns of the community. A draft of the Community Response Plan was released to the City in mid-June with a promise to discuss and respond to the community concerns. The City responded two days before the Center is scheduled to open. The unresponsive reply is once again evidence of the City’s disregard for the CID community. Again, the City of Seattle has not kept its word and failed the CID. Here is a brief recap of the events and activities:

• Feb. 8: Sudden notification of the location of the Navigation Center at the Pearl Warren Building, 606 12th Ave. S.

• Feb. 20: Friends of Little Saigon sent letters to the Mayor’s Office and City Council to pause the Navigation Center to engage the community.

• Feb. 28: City of Seattle hosted a public meeting where community members were invited to express their concerns.

• Mar. 10: Meeting with Mayor Murray and his advisers to discuss a pause.

• Jun. 12: Draft Response Plan distributed to the City of Seattle and community partners.

So, what does this mean to you? To our community?

There is still more engagement to be done. We want to hear from you. We will continue to fight through our civic processes, voting power and legal means until we are treated equitably and respectfully as a community. If you have concerns about the Navigation Center, contact the City of Seattle by calling Jess Chow at (206) 733-9405 or email at [email protected] If you want to help us advocate for our community’s needs, please contact [email protected]

All of the meetings and press releases are available online at www.friendsoflittlesaigon.org or follow Friends of Little Saigon on Facebook for updates about advocacy activities.

Friends of Little Saigon (FLS) is a nonprofit organization that is facilitating community conversations around the Navigation Center. FLS received funding from the Human Services Department to continue to engage the community and develop a Response Plan. However, we do not work for the City of Seattle. We stand to advocate for the community.