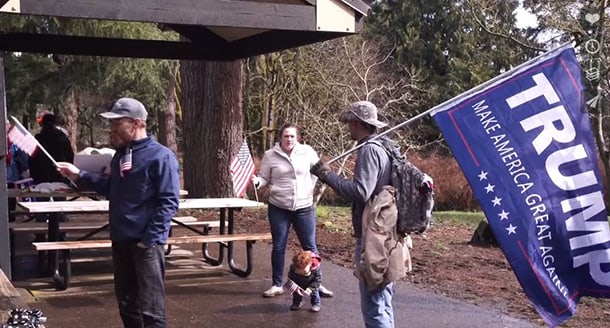 With the release of her documentary, State of Oregon, Adele Free Pham makes one of her boldest on-screen statements yet. This time, the biracial filmmaker and Firelight Doc Lab Fellow, tackles the murder of a black teen in a 10-minute documentary. Currently a short, the film is being developed as a feature. Below, Pham discusses her project.

Yayoi L. Winfrey: Why are your films always about race?

Adele Free Pham: As a mixed-race person with a Vietnamese refugee father and white American mother, I’m not really allowed a legitimate racial identity other than my own creation, which my first documentary Parallel Adele is about. To a degree, Asians aren’t even considered real people of color. They just sort of tack us on. So, trapped in this black-and-white paradigm called America, I am drawn to the civil rights struggle as opening the door for Asian refugees like my father, whose country was ironically destroyed by the American military industrial complex.

I was lucky to have an erudite, “woke” hippie sort of mom, who always supplemented my public school education with YA books about slavery, the Jim Crow south, the genocide of Native Americans, the Holocaust. It’s not just my Asian-ness that makes me a person of color. My otherness comes from growing up in a household with parents from opposite sides of the globe, who really didn’t speak the same language when I was born. There’s a bit of madness in that I’ve yet to see in more than a handful of families, although hybridity is commonplace now. Perhaps that’s why I’m a bit obsessed with race and creating new historical narratives through documentary film. Film is our greatest teaching tool, and fostering empathy and multiculturalism in early childhood is the only way to eradicate the scourge of white supremacy, globally.

YW: What moved you to make State of Oregon?

AP: I was born and raised in Portland, and acutely aware of my difference as a biracial Asian child in a predominantly white environment. Sadly, some of my earliest memories were of the neo-Nazi problem in my neighborhood. What I didn’t know was that in 1989, less than a mile from my childhood home, an Ethiopian immigrant named Mulugeta Seraw was beaten to death by a trio of neo-Nazis led by Ken Mieske, as their girlfriends looked on. When I heard about the murder of Larnell Bruce Jr., how white supremacist Russell Courtier violently ran him down in a jeep as his girlfriend Colleen Hunt cheered “Get em baby, get em,” it really took me back to an era that is still very much with us.

Larnell died in August 2016 at the height of “Trumpism.” Like a lot of people of color, I was horrified that Trump’s ascendence to legitimacy was a green light to these, alt-right neo-Nazis to ratchet up the hate crimes. Still, we seem to already be forgetting the subsequent 2017 Max train stabbing murders in Portland—even Charlottesville as the days pass and the atrocities pile up. But it’s hard to find logical people who deny the spike in violent xenophobia across the country, perpetrated by white men who I deem domestic terrorists. Meanwhile, the Trump administration has slashed all federal funding to combat white domestic terrorism. We literally witnessed neo-Nazis parading with semi-automatic guns, shouting “Jews will not replace us” in Virginia last month, unbothered by law enforcement. That’s the epitome of white privilege. I hope America wakes up. If this is what’s going on in front of our eyes, imagine what’s going on behind the scenes.

YW: How do you expect your audience to react State of Oregon?

AP: I expect people to be saddened and outraged that this is happening in 2017, while realizing it comes as no surprise. Maybe we pushed white supremacy to the fringes, but with the internet, Trump, the xenophobic chickens have come home to roost! And I think Portland mayor Ted Wheeler’s inability to recall who Larnell Bruce Jr. was in the film, speaks volumes to Portland as a place. When I began filming State of Oregon in March 2017, I was worried I wouldn’t have much of a story because no one besides hardcore activists like Teressa Raiford even remembered who he was. This goes for “woke” Portlanders of color as well, everyone is conditioned to forget. I realized that the narrative of this contemporary lynching of a black teen in Oregon was more palatable to a national audience because in Portland we are trained to forget the perpetual violation of people of color. It’s uncomfortable for the overwhelming white majority and undermines their control. This goes way back to Oregon’s constitutional foundation as a white-only state—a historical legacy that runs parallel to Larnell’s story, for proper context. This is the history we should be teaching in Northwest public schools. Instead, it’s been shrouded in secrecy until very recently.

YW: What will audiences take away after watching it?

AP: I hope that viewers question our indoctrination in white supremacy from so-called liberal albeit hegemonic bastions like Portland, to confederate Charlottesville, to global cities like NYC. It’s really about how we’re comfortable with it. I want the horror of what happened to Larnell to sneak up on you and stick in your craw. Hate crimes don’t happen in a vacuum, they are encouraged in overt and covert ways. It’s up to logical people to take a stand for more than a weekend, and not let identity politics blind us to the fact we are all losers in this system.

YW: When will you make a feature-length version?

AP: I’ve been trying to make a longer film/series about the experiences of people of color in Portland, since before Portlandia debuted and made us look even whiter and cornier than I thought possible. Except in Portlandia, whiteness is passive (besides the fact that there are virtually no people of color on screen). My proposed series is a response to why Portland is so white backed up by historical facts. I didn’t even know Oregon was founded as a white-only state (not unlike Washington) until I was in my late 20S living in Brooklyn, which says a lot about the place and what we implicitly accept in society. Mulugeta Seraw’s brutal murder and my own father’s shooting in 1983 are two “chapters” that were cut from the 10-minute State of Oregon film. These are stories that deserve to be told, and measured against the current gentrification that has displaced what was once the Black Portland enclave of Albina—originally formed by legalized redlining. The gentrification is insidious and low-income people of all ethnicities are being pushed out to the margins of Portland and Gresham. The night Larnell was run down was a symptom of these socio-economic pressures boiling over, met with a racist foundation that has never been atoned for. Anti-blackness is an international problem, really, from Portland to Guangzhou.

Watch State of Oregon here. And, look for Adele’s upcoming documentary: “Nailed It: Vietnamese and The Nail Industry.”