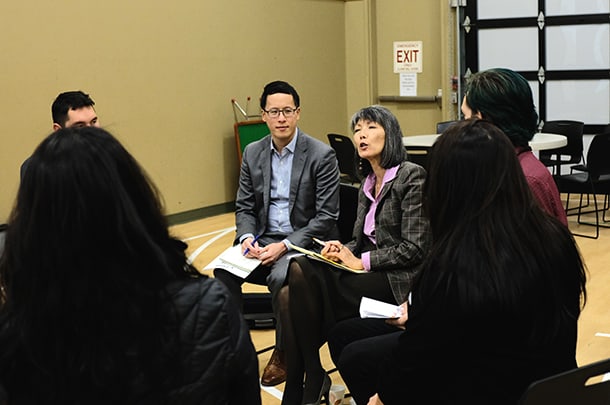 “What goes on in your backyard is just as important as what goes on in Washington D.C.,” said Michael Itti, executive director of CAPAA, introducing the event. Itti highlighted issues and bills of interest to the Asian Pacific Islander community, including the Voting Rights Act, McCleary decision on education funding, and health equity for Marshall Islanders.

Sen. Hasegawa, vice chair of both the Labor & Commerce and Financial Institutions & Insurance committees, said that with both houses of the Legislature now controlled by Democrats, they will be “able to get some good stuff done.” However, Hasegawa also cautioned that it will be important to finish the next legislative session on time. This 2017 Legislature went into three special sessions over disagreements about the budget.

One of Hasegawa’s main goals for the 2018 session is to create a publicly owned bank. Currently only one state, North Dakota, has its own bank.

Washington state banks with U.S. Bank, and Wall Street gets to reinvest the state’s money and charge fees on it, Hasegawa said. “We lose control of our own tax revenue.”

Rep. Gregerson said it’s important that more Asian Pacific Islanders run for political office. Voter turnout would be higher if there were more diverse candidates, she said. “People identify with those who look like them.”

Gregerson sponsored the House version of the Voting Rights Act, which would make it easier for disenfranchised communities to take local governments to court, and for cities to switch from electing mostly at-large politicians to voting districts. The hope is that electing representatives by district–as Seattle does for seven of its nine City Council seats–will allow for more minority representation.

Similar bills have been considered since the ACLU won a lawsuit against the city of Yakima for voter suppression in 2014. While the city is around 40 percent Hispanic, it had never elected a single Latino to the City Council in the 37 years its electoral system had existed. The ruling stipulated that City Council candidates would only need to win a majority of their geographically-based district, instead of an at-large majority.

The Washington state voting rights bill stalled in the Senate after passing the House this year, but could be reintroduced.

Warden-Hertz of the Northwest Immigrant Rights Project said there was room to make a difference locally despite the negative rhetoric nationally surrounding immigration issues. “There’s reason to be gloomy but there’s also a lot of energy for organizing,” he said.

Warden-Hertz listed priorities for the organization including the Keep Washington Working Act, which would limit how much data law enforcement could collect regarding immigration status, and prevent federal agencies from using state resources to arrest undocumented immigrants.

Another priority for the organization is to procure state funding for legal defense, so that people facing deportation who can’t afford a lawyer can still receive legal representation.

The organization is also focused on responding to a potential increase in deportations of Cambodian and Vietnamese immigrants, as the Trump administration pressures other countries to accept more deportees, Warden-Hertz said. “They’re looking for all these little things they can do to deport more people.”

An inquest into Le’s death is scheduled for May, but Jacobs said it’s an insufficient process that needs improvement. “Even though you have a public airing, it doesn’t get you what you want,” she said.

The OLEO also tracks data on use of force, gives feedback to the sheriff on policy, and certifies investigations on their thoroughness and fairness.

“We go through [finished investigations] with a fine-tooth comb,” she said.

Rep. Santos, who chairs the House education committee, said the McCleary decision–the 2012 State Supreme Court finding that Washington was failing its constitutional duty to fully fund basic education–would be a high priority for 2018.

The Legislature approved a plan allocating additional funding to K-12 education, but the court said it will still be short roughly $1 billion before the 2018 deadline.

Santos said the state should stop funding education based on how long a student spends in class, calling this a system created for an 18th century agrarian society. Instead the state should focus on competency and mastery, she said.

Hasegawa said he feels burdened as one of the only people of color in the state Senate. The Voting Rights Act will help address the issue of representation, he said.

Santos said it’s important for people to cultivate an “ethos of service,” and that running for office should not be the end goal. “People whose objective is to run for office, it’s all about them,” she said. They tend to use the office as a stepping stone and move on, instead of serving the needs of their constituents.

But many Asian-Americans, particularly women, have a cultural inhibition to activism and politics, Santos said, quoting the Japanese saying: “The nail that sticks up gets hammered.”

“We have a community responsibility to create the understanding that running for public office is a step for public service…not ego,” said Santos.

Knocking on doors and asking for money is harder to do for yourself than on someone else’s behalf, said Rep. Gregerson. Young people can get their start in public service by first identifying an issue or organization they’re passionate about.

The legislature will convene on January 8 for the 60-day 2018 session. While this is a shorter session for a non-budget year, the legislature last year did not pass a capital budget, which funds new construction and improvement projects, including schools. You can read CAPAA’s 2017 list of bills to track, many of which may be reintroduced in the next legislative session, here.