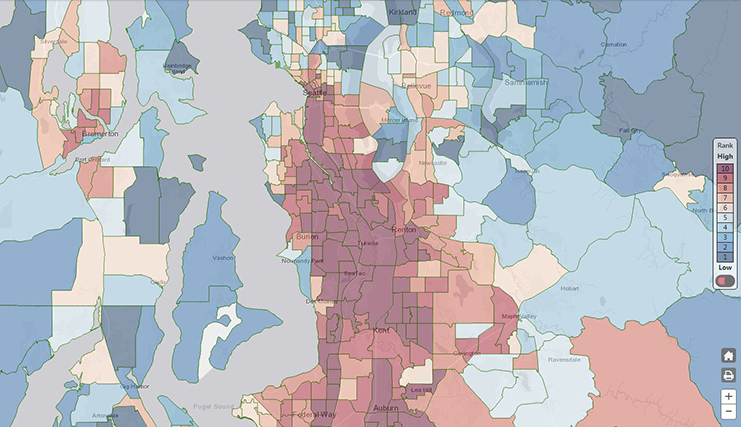 [Update: An earlier version of this post incorrectly stated that the bill awaits a concurrent vote in the Senate. The post has been corrected].

For the first time, the Washington House of Representatives has passed an environmental justice bill, which aims to tackle environmental health disparities across the state.

The map, publicly available online, draws on state data to show how each census tract in the state stacks up when it comes to environmental health risks, ranked from 10 (worst environmental health impacts) to 1. “Risk” is determined through multiplying threats to environmental health — from exposure to ozone and traffic pollution to lead risk in housing — by vulnerability, defined by socioeconomic factors (including unemployment, poverty level, percentage of the population with limited English proficiency, race and ethnicity).

According to the map, neighborhoods like the Chinatown-International District and South Park, and many pockets of south Seattle and south King County, score high on environmental health disparities, as do rural areas around the state, such as the census tracts containing the Yakama Nation, which is 47 percent Native American.

“Nearly every legislative district has neighborhoods highly impacted by environmental health hazards,” according to the website of Front and Centered, a coalition of more than 70 organizations across the state rooted in communities of color and low-income communities. The bill has been endorsed by 86 organizations across the state representing environmental justice advocates, labor unions, doctors, immigrant rights and anti-poverty groups, faith leaders, farmworkers and more.

“Communities should be part of environmental health solutions that impact our children and future. The collaboration of agencies with our communities will help make this happen,” said State Sen. Rebecca Saldaña (D-37) in a statement shared by Front and Centered.

The bill now goes before the state Senate.