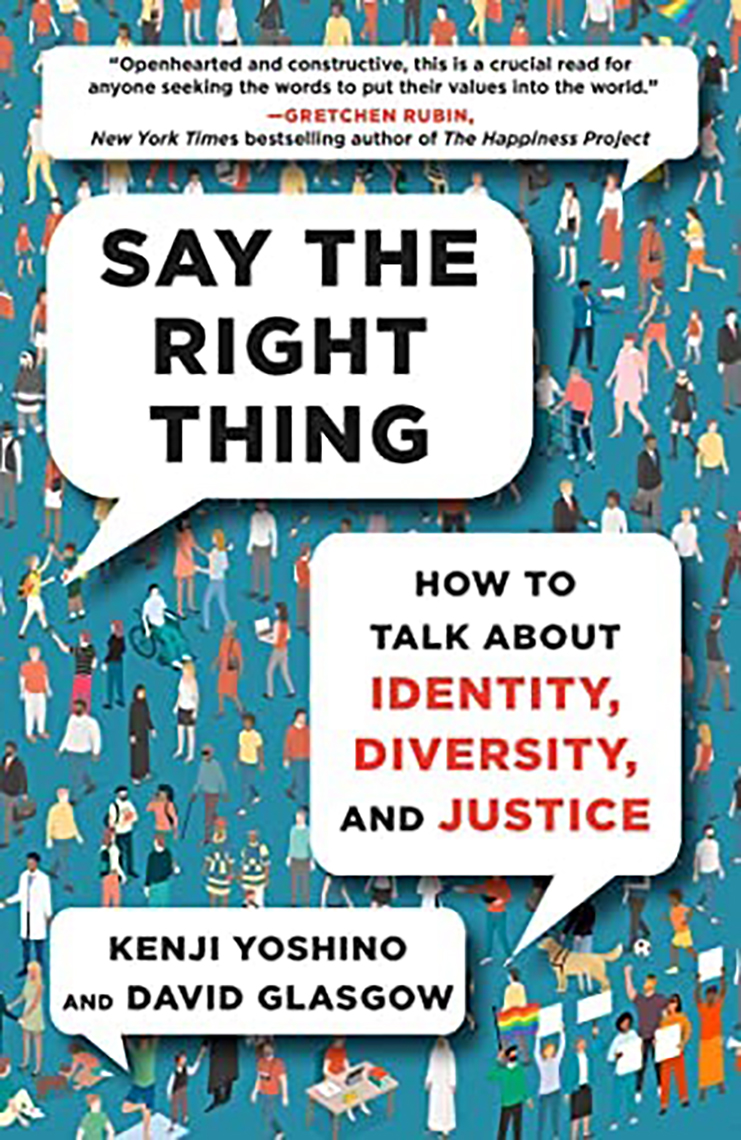 “If you don’t have something nice to say, don’t say anything at all,” my mother used to scold when I was little. I’ll bet a matcha latte that your mother said the same. Then there’s always the Golden Rule: Treat others the way you want to be treated. Following these time-honored principles used to be all it took to secure your place as an upstanding member of society. Not anymore. Now, what you don’t say often shouts louder than what you do say, and you’re in serious trouble if you don’t treat nondominant communities how they want to be treated – even if you don’t know how. Dizzy yet? Kenji Yoshino and David Glasgow, both faculty at the NYU School of Law, are here to help. Say the Right Thing: How to Talk about Identity, Diversity, and Justice tackles everything from watercooler gossip, to tense boardroom meetings, to nail-biting holiday gatherings. Yoshino and Glasgow even attempt to bridge the political fault line that bisects most audiences: don’t we all need a little help saying the right thing?

Yoshino and Glasgow introduce their nonpartisan handbook by doing the opposite of what you’d expect. They actually highlight their personal bias in the book’s introduction. “We are both gay men who spent our formative years in the closet,” they write. “That suffocating silence led us to search for a more powerful way of communicating – one where we could speak and expect to be heard.” (1) This strategy is wise. By spelling out who they are and why they are writing, the authors are giving us the option to back out. By continuing to read, we’ve just accepted their point of view – even if only for the moment. Disclosing their identities at the beginning of the book is far more straightforward than dropping a footnote in the “Afterword.”

The book itself is well-organized and engaging, perfect for anyone who’s eager to learn but unlikely to hang around a classroom. Each of Say the Right Thing’s seven chapters builds off the concepts taught in the previous ones. Struggle with retention? Yoshino and Glasgow employ clever alliterations and pneumonic devices to give you confidence to navigate the verbal shuffle.

Example: Chapter One teaches how to avoid four conversational traps if you’re a dominant individual confronted by nondominant individual. Most people avoid the offending topic by stonewalling, deflect it by saying the hurt was unintentional, deny it by pointing out other situations when it was acceptable, or attack the person feeling discriminated against. Yoshino and Glasgow take an entire chapter to dig into the why’s and wherefores of each tactic – and how you can reframe it to a positive response – although that’s a lot of information to keep in your head. But what about A.D.D.A., the first letter of each word? Much more manageable.

In addition to their gift for simplifying and synthesizing content, Yoshino and Glasgow are just plain fun to read. Combining two progressive law professors with Sonia Sotomayor and Matt Walsh quotes keeps anyone from taking themselves too seriously. Instead of reading like an accusatory didactic manual,. Say the Right Thing reads much more like a friendly conversation: “Rather than communicating indifference, listening carefully to the other person and showing an interest in their viewpoint will signal that you’re an engaged ally.” (75) Yoshino and Glasgow care more about your attitude than your success rate.

It’s no surprise that one of the best chapters in Say the Right Thing is the chapter about disagreements. I’ve already highlighted how Yoshino and Glasgow played fair by disclosing their own bias, as well as including representatives across the political spectrum. Nevertheless, I wondered if they’d sustain their diplomatic track record during this chapter. Would the authors use this chapter to foist their values on non-progressives or bad-mouth other political parties?

I’m happy to say Yoshino and Glasgow passed with flying colors. “Disagree Respectfully” focuses less on winning arguments and more on making space for opposing voices to converse without one dominating the other. Hearing and being heard is the real win. The authors openly admit there’s no one-size-fits-all manual for identity and social justice disagreements, but they emphasize the importance of listening to you your conversation partner with humility and curiosity.

Say the Right Thing is clearly designed for such a politically turbulent time as this. It even ends with a brief conclusion that briefly summarizes. its main points. Break out a highlighter and you can personalize it to find what you want in the blink of an eye. From simple details like page formatting, to craft choices like alliteration, and self-disclosure, it’s obvious that Kenji Yoshino and David Glasgow have invested meticulously in their work.  Why wouldn’t we want to say the right thing?