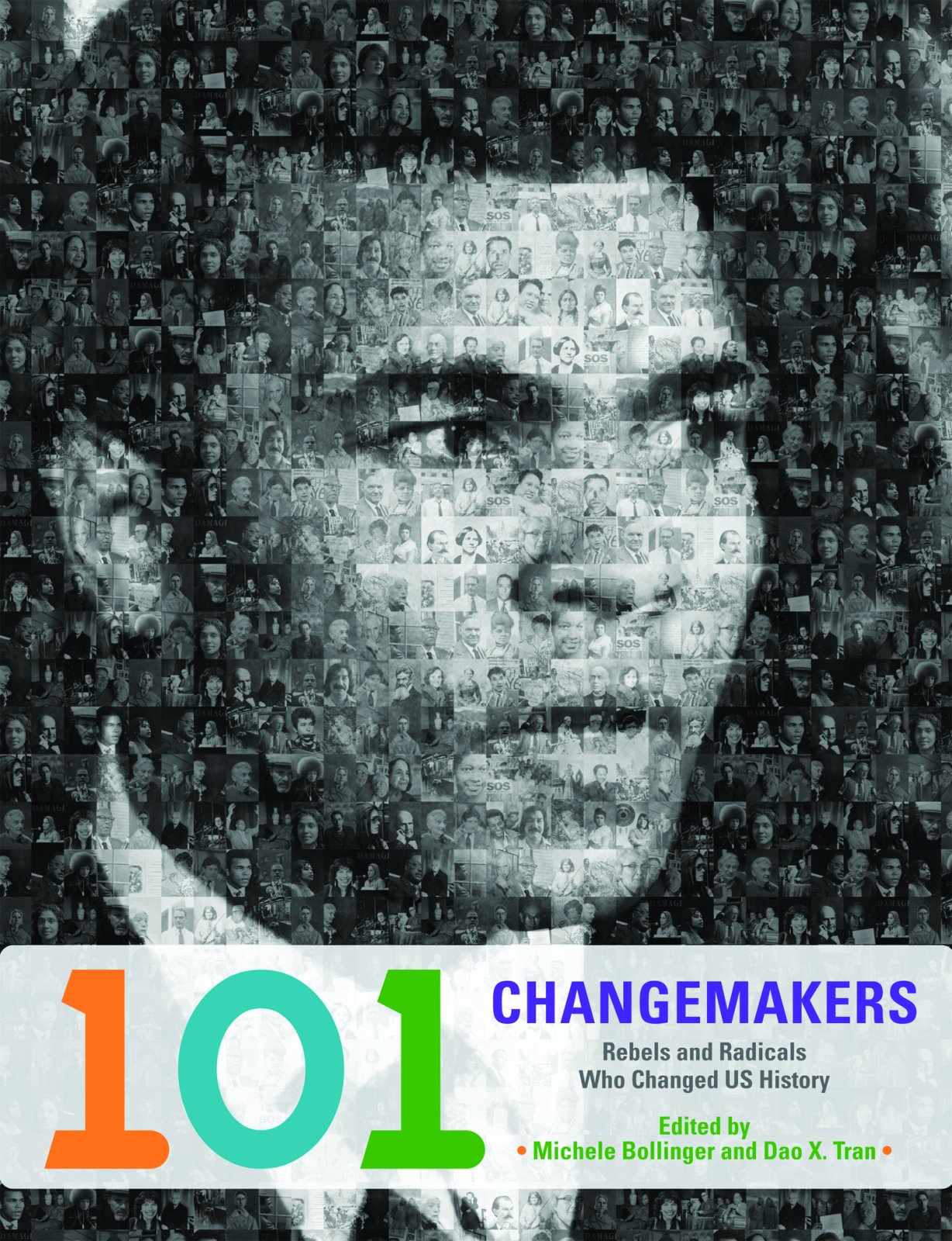 A note from arts editor Alan Chong Lau: Welcome to Part 1 of our 2017 look back at books for kids and young adults. Handling issues of social justice, community and history can be tricky in books for kids but not impossible. Our reviewers look at books that attempt this and note how well or not so well the authors do. Thanks for reading and happy new year of the dog!

101 Changemakers – Rebels and Radicals Who Changed US History
by Michele Bollinger and Dao X. Tran. (For ages 12 and above)

I love making lists and yet, there are only so many slots. In this case, a list of 101 social justice activists is more difficult than you might think! Kudos to editors Michele Bollinger and Dao X. Tran for recruiting more than 50contributors, including three in the Seattle area: Jesse Hagopian, Dan Troccoli (both members of the Seattle Education Association) and Leela Yellesetty, a contributor to SocialistWorker.org and International Socialist Review. Many of the contributors are secondary school teachers and no doubt thought of their own students when preparing this peoples’ history reference book.

The entries include an image of the individual, accessibly written biographies focusing on their activism, a timeline, a “more you can do” section and my personal favorite, “what do you think?” A colleague of mine would routinely pose the question, “So what?” to push student consideration of the significance of their research. The framing epigraph for this volume is from Howard Zinn, best known as author of A People’s History of the United States: “What we choose to emphasize in this complex history will determine our lives. If we see only the worst, it destroys our capacity to do something. If we remember those times and places – and there are so many – where people have behaved magnificently, this gives us the energy to act, and at least the possibility of sending this spinning top of a world in a different direction.”

This collection brings together activists of intersectional movements. It’s rare to see Queen Liliuokalani, the last sovereign queen of the Republic of Hawai’i in the company of James Baldwin, a brilliant gay African American writer. Or, Bhairavi Desai, founding member of the National Taxi Workers Alliance, and in 2013, elected to the American Federation of Labor – Congress of Industrial Organizations’ Executive Council, alongside Wilma Pearl Mankiller, first woman to be elected chief of the Cherokee Nation (1985-1995).

I note that of the 101 Changemakers, there are only six who are Asian or Pacific Islander Americans, including (besides the two above) Grace Lee Boggs, Carlos Bulosan, Fred Korematsu and Lam Duong. The collection does include young activists, not just historical ones, and even less represented communities such as the differently abled and transgender communities. There are familiar names such as Dr. Martin Luther King, Jr., and less so: Judy Bonds, an activist in West Virginia who organized against “mountaintop removal” because of the damages to the environment.

As a reader, this collection was a wonderful re-introduction to social justice leaders whose personal stories may be lesser known. These days, the temptation to just Google whatever you’re looking for won’t bring you to a curated collection like this. Bollinger and Tran as editors share a labor of love, a love for humanity’s magnificent capacity to follow the arc of justice. Hoping to see even more Asian and Pacific Islander names in the mix, I began to think of others whose accomplishments and vision fit as rebels and radicals who have changed U.S. history. There’s a next book to be had that includes Philip Vera Cruz, Helen Zia, Yuri Kochiyama, Kent Wong, and local leaders such as Cindy Domingo!

My Night in the Planetarium
by Innosanto Nagara. (For elementary school ages) 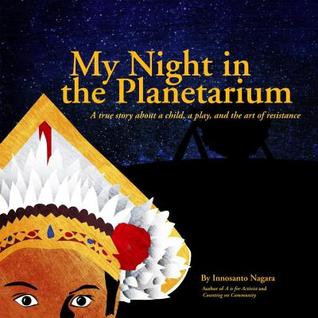 Innosanto Nagara’s most recent book, My Night in the Planetarium, is based on his own family and their experiences under a repressive regime in Indonesia. Told by his seven-year-old self, he begins by saying, “This is a true story. Do you want to hear it?” He shares some basic information about Indonesia, including how the Dutch came and stayed for 350 years until Indonesians had a revolution to take back their country.

Nagara’s father is a poet and playwright and became targeted because his plays implied too much criticism of the military dictatorship. His plays were quite popular and politicized audiences. Since Nagara watched the rehearsals every day, he learned all the lines and eventually his father created a part for him as a spy.

As the play toured, there were increasing numbers of protests by students and other artists. The theater troupe learned througho word of mouth that they might get arrested after their performance at Taman Ismail Marzuki (TIM), a large art complex. Nagara illustrates this part with a picture of toothbrush poking out of a back pocket. The actors said, “If you’re going to go to jail for a long time, you may as well have your toothbrush with you so you can keep your teeth clean (true story).”

However, at the end of the performance, the actors melted away with the audience and Nagara was left behind with his mom. They believed soldiers would be waiting at their home, too, so they stayed in the planetarium. Nagara says they watched the planetarium show over and over again, and he finally fell asleep on his mother’s lap.

His father evaded the arrests and continued his artistic work, even becoming a movie star. The General was finally forced out of office by massive student demonstrations in 1998. Meanwhile, Nagara continued to occasionally act in his father’s plays. Nagara affirms that you can want to be many things and that “now I’m an activist and a graphic artist. It’s okay to change your mind about what you want to be when you grow up.”

Nagara’s story shows how the politics of resistance can be interwoven with family survival and love. While a military dictatorship sounds and is scary and oppressive, from a seven-year-old’s viewpoint, life still happens.

Lion Island
by Margarita Engle. (For ages 10 and up) 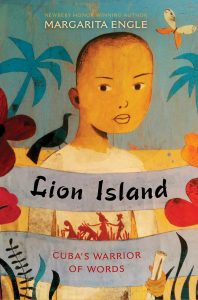 describes her book, Lion Island, as the last in “a group of historical verse novels about the struggle against forced labor in 19th century Cuba.” Through a series of poems, Engle tells the story of Antonio Chuffat, an Afro-Cuban whose youth was shaped by the struggle for independence and freedom of expression, and specifically against forced labor.

Antonio is 12 years old in part 1, “Running with Words,” and he delivers messages for a business man to leaders of the Chinese and Spanish empires. He becomes friends with twins who, along with their father, fled to Cuba to escape the anti-Chinese violence in California. 5,000 Chinese refugees – los Californios – settled in Cuba, some directly traumatized by the 1871 Los Angeles lynching of 18 Chinese people.

The twins, Wing, a boy, and Fan, a girl still grieve their mother’s death that occurs on the Panama trek. Fan ponders the constraints of her life, fully aware that Wing, as a male, has more freedom to work outside the home and to intermingle with society. Fan recalls her mother’s last word to her, “fight, but did you mean that I should battle sadness, or struggle—like Wing – against rage?”

Fan’s “nightingale” voice earns her a place in El Teatro Chino where she sings Chinese opera or new styles that mix Taino Indian rhythms, “African finger pianos, and Spanish guitars.” Yet all around them is the arbitrary violence of soldiers and field overseers and the loss of hope as poverty and forced labor contracts grind away at one’s humanity. Inspired by knowledge of the underground railway in the U.S., Antonio, Fan and Wing, decide they will also help to hide runaways using Fan’s theater as cover.

Margarita’s verse novel elegantly sketches the young protagonists’ personalities, fears and dreams. Antonio is entrusted to carry dangerous messages; indeed, his father hides runaways among his cuadrillas (work gangs). Yet his friend, Wing, runs away to take up guns with the Resistance. Fan had to run away from home to take her singing role and her father takes a local woman as a wife. The young people ponder their cultural identities, especially when lacking opportunities to further their Chinese or other language studies.

The adventures at the heart of the story are life and death, and each young person searches deeply within to decide what choice she or he feels is best. The abuses of the laborers eventually come under investigation of a visiting delegation on behalf of the Emperor of China. The chapter titled, “Listeners,” retells the testimonies of some of the Chinese workers: how they were repeatedly tricked into signing eight-year contracts, how the threat of violence was used to force submissions, how a worker could be presumed Chinese on the basis of Taino Indian traits, how they are baptized with new names against their will.

Margarita’s compelling story inspires further research, and she ends by including sources for young people and adults. To place the experiences of nineteenth century Chinese diaspora in this broader context complicates yet also makes Asian American identity more whole.