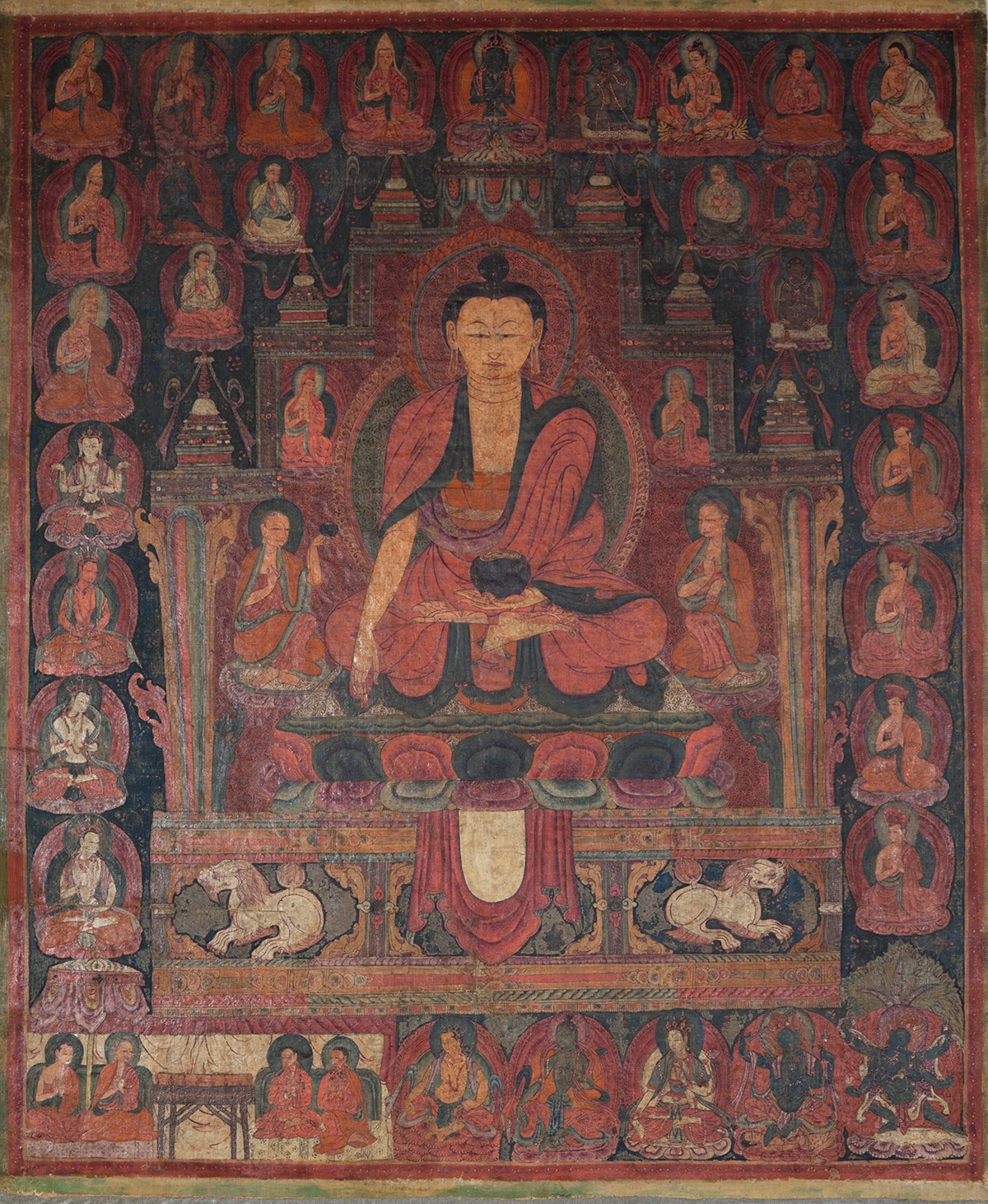 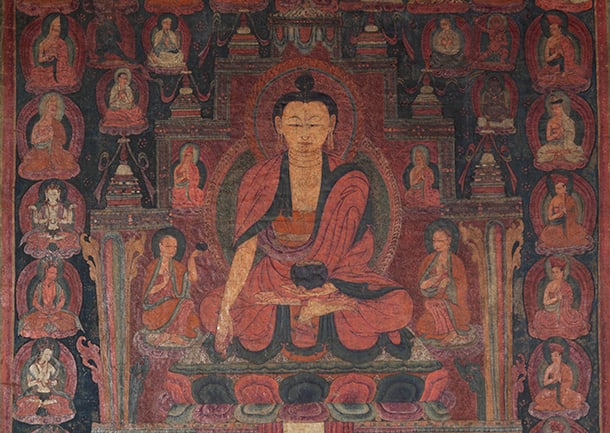 The Asia Society Museum does perk up when it comes to great exhibitions. Unknown Tibet: The Tucci Expeditions and Buddhist Painting sharply follows the trail of the previous, well received Lucid Dreams and Distant Visions: South Asian Art in the Diaspora and After Darkness: Southeast Asian Art in the Wake of History, but with a unique twist. Exploring a rarely-seen collection of exceptional works, acquired by a late Italian scholar and explorer named Giuseppe Tucci during his Tibetan expedition in the years 1926 to 1948, the Museum has become the first to show, in its entirety, an intricate display of ancient Asian history for the first time in the United States.

Made up of over 50 Buddhist thangkas (cloth paintings) presented throughout each of the sections, the exhibition, states Adriana Poser, John H. Foster Senior Curator for Traditional Asian Art, is “about journeys: both geographical and spiritual.” The elaborate array of artworks directs its attention not of culture and retrospect but of an unknown world that is not of the modern, yet contains slight elements of it. As Tucci once wrote: “nowhere it is said that the new is better than the ancient, and even in the imaginations of those separated from us by time and space, we may catch a flicker of that eternal light.” In lieu on the continued interest in the Dalai Lama, his work and that of the Free Tibet movement, this show couldn’t have come at a better time.

The first work seen in the entrance section, The Spiritual Journey: The Path of the Sultra and the Path of the Tantra, is nicely entitled Amitayus (Ca. 16th century CE). Executed in the Gelug tradition, with water-based pigments on cloth and with much attention, what obviously appears to be as one of three long life deities in the work is really the figure Amitayus – a central being to the various multiple images of himself, all presented within a dominate, bold red-color composition. Known in Tibetan Buddhist art as the 100 Buddhas, these small images appear to be floating in a cosmos of heavenly or otherworld-like energy, yet quite still in all its uniformity. Each said image contributes to the overall goal of the dedicated practitioner who views it – a means for meditation, ritual support and path to the attainment of Bodhi or enlightenment.

In the second section, Path of the Sutra: Buddha, the work entitled Buddha Sakyamuni (15th century CE) and acquired by Tucci in 1933, accounts as one of the highest qualities of thangkas from the Luk Monastery – a dazzling array of different variations of red and multiple images of lamas (representing the traditions of Gehig and Kagyu). The Sakyamuni sits in the center; the primordial buddha, Vajradhara also sits in the center yet on the top row while the various lineage holders are shown to the left and right of the painting-all in unison – bringing about a somewhat palatial presence to the work.

The exhibition certainly shows its weight: each section of Buddhist paintings has own distinct representation of meditative and spiritual ideals and aspirations, with much traditional and historically detailed vision and forethought.

The third section, Path of the Sutra: Sangha, brings about a compelling group of 14 paintings, shown quite vividly and depicting the ways and ideals of a Buddhist community known as the Sangha. Made up mostly of religious leaders, monks, nuns and the like, their goal is the preservation of the Buddhadharma – the teachings of the Buddha. A group of these works, Arhats (monks of the Shakyamuni Buddha) created in the 17th century, are known to be a precise depiction of the ‘perfected being.” One of these, entitled Cullapanthanka Arhat (17th century, possibly Khan / East Tibet), stands quite vibrant in its details: a dark, pristine sky, lush greenery and images create an otherworldly yet traditional background for fantasy. The image of the monk is centered quite regally and surrounded by four equally regal Arhats and various wild animals, they all appear to be entranced by their surroundings and the discourses between themselves – thus making the piece both engaging and contemplative at the same time.

The fourth section, Path of the Tantra: Lama (the first of 3 tantras shown – the other two being Yidam and Protectors of the Dharma) speaks on the general importance of the Lama (the Tibetan designation for a spiritual master) and whose central position in the religion is that of preaching and explaining the liturgy and meditative rituals of the Buddha. A water-based pigment on cloth work entitled Guru Rinpoche and his Eight Emanations (16th-17th centuries CE) uses distinctive style and color in a means to depict and construct a sense of symbolism as it relates to the spirit along time, space and presence. What I found quite interesting is the radiance and specificity in the central image’s stark gaze, and how the outer figures interact in an omnipresent manner – complementing the central figure yet engaged in equally spiritual statue and magnitude.

The second tantra, Yidam (a personal meditation deity), is an elaborate display of images in various representations, all intent to show the progress (or digress?) of spiritual accomplishment in its entirety – and it shows well. Figures within each work (the Tara or Chakrasamvara for example) appear quite detailed, while mandalas, such Cakrasamvara Mandala (16th – 17th century) reminds the viewer of little nuances in the colors and shapes of things as the eye glances them in its immediacy (Figure 2).

The third tantra, Protectors of the Dharma (deities assigned to protect the mandala – the sacred space where the Path of the Tantra ritual takes place) is my personal favorite.  In the hour or two that I took to gaze at each image, one can only imagine the spiritual and mystical connection that went behind each piece. Active, magnetic and earth-shaking imagery are shown in every manner possible: the gallant and the monstrous working side by side with such magnitude and simplicity. Such as Black Garuda (18th century), the central image being “a wrathful protector, whom Buddhist practitioners would ask to transmute sickness, harmful spirits, and negative karma”, which is most powerfully depicted as dark, forceful and menacing yet god-like and serenely protective of its environment and its sacred duties (Figure 3).

Lastly, making my way toward The Tibetan Cosmos, a sweeping work entitled Bon Deity Tsewang Rigzin (18th century) was surely a sight to behold. Bright and somewhat monochromatic, colors and shadows reflect the various images of deities inherent in Tibetan Bon religion and Buddhism, but more than that, the central figure speaks of “a support for meditation and as a votive offering to secure the efficacy of the long-life ritual for the person for whom the ritual is performed.” An array of floral displays, clouds, mists and organic images radiates the surroundings deities, thus creating an otherworldly and atmospheric event and placing the viewer in a most contemplative and meditative state. Quite impressive.

Overall, Unknown Tibet: The Tucci Expeditions and Buddhist Painting is not to be missed.

The exhibition will be on view at the Asia Society Museum (725 Park Avenue in New York) till May 20th.