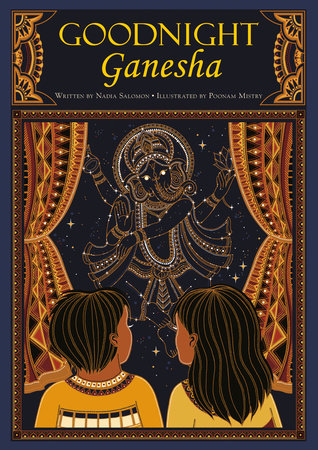 Children all over the world have bedtime routines as varied as their culture but equally important to them and their parents and grandparents alike. It is a moment to bring the day to a peaceful close while making lasting memories and quietly commemorating their love for each other.

Goodnight Ganesha by Nadia Salomon is a picture book that celebrates the beloved nightly rituals of two children visiting their grandparents’ home in India. With rhymes patterned on Margaret Wise Brown’s Goodnight Moon, debut author Salomon highlights Hindu culture in Goodnight Ganesha. Her own bedtime rituals, the folktales of India, and the stories of Hindu gods and goddesses have been a rich source of inspiration to her.

The artwork in this book is outstanding. Poonam Mistry is an artist of stupendous talent. Delicate filigree work reminiscent of the art and architecture of ancient India fills every page with color. Her style explores the relationships between patterns, shapes, and colors to create these beautifully intricate illustrations. Despite her pieces being predominantly hand-drawn, you would need to take a magnifying glass to see all the minute details.

Each page spread has art on one page and art and two rhyming paragraphs on the facing page—a story of the children with their grandparents and the goodnight lyrics.

There, by the window, beams warmth in a frame.
With wisdom in hand—Ganesha’s his name.
The giver of good luck and hope just the same,
He watches as we play our fun Goodnight game.

Ganesha, the god of wisdom believed to be the bringer of good luck, is one of the best-known and most worshipped deities in the Hindu pantheon of gods. Most Hindu households have an image or idol of Ganesha.

In Goodnight Ganesha, Tata, the grandfather, is the mischievous one who loves to play tag with the children and chuckles and laughs with them. He enjoys reading them stories of great derring-do from India’s history, literature and folktales, and epics such as the Mahabharata.

Nana, the grandmother, teaches the children to ceremoniously offer the yellow and orange marigold flowers, representing brightness and positive energy, to the gods in the puja, prayer, room. In a sacred plate, the children light an oil lamp and burn an incense stick, and then close their eyes and put their hands together, seeking the blessings of the gods. Nothing could be sweeter to the children than Nana’s hand caressing their hair as she softly sings them a lullaby lulling them to sleep.

Vikram and I snuggle up with Bear,
As Nana’s soft hands are caressing our hair.
Tucked in her sari in the crisp night air,
So grateful for this time we share.

It is through routines such as these that children bond with parents and grandparents. Knowing what is coming next has its own anticipation of beloved habits that comfort the heart and quiet the soul. In her Author’s Note, Salomon says, “I hope this book inspires you to think about your own bedtime routines and traditions, and perhaps even create new ones of your own!”