A peace vigil for Benito Enriquez, who was beaten to death in the International District in June, has been organized for Friday, July 10 at 8:30 p.m. on the corner of 5th and Weller. A moment of silence will occur at 9:00 p.m. Organizers said the purpose of the vigil is to bring the community together and to show that the community wants the streets to be safe.

On Saturday, June 27, Seattle Police responded to reports of a fight between two men near Fifth Ave S. and South Weller St. at around 9:00 p.m. One of the men, later identified to be Enriquez, sustained life-threatening head injuries and was taken to Harborview Medical Center, where he died from his injuries. Enriquez  had attended a Kenny Chesney concert just prior to his death the Kenny Chesney concert.

USA Today interviewed Joey Smith, who was at the Kenny Chesney concert with Enriquez. Smith said Benito Enriquez went to get T-shirts for his daughter as the concert was ending and planned to meet up at the car. He said he did not believe Enriquez was in a fight and that Enriquez was beaten on his way back to the vehicle. Smith said Enriquez didn’t have a pulse when medics arrived.

The homicide suspect is believed to be a Hispanic, Middle-Eastern, or Pacific Islander male in his 20s, according to the SPD report. The suspect is between 5-foot-11-inches and 6-foot-1-inches with a medium, stocky build. He was last seen wearing a black and white “trucker” style baseball cap, a white v-neck T-shirt, and black shorts.

The suspect was with a woman described as white and in her 20s with a 5-foot-8 medium build. She has long, straight blonde hair and is possibly pregnant. She was last seen wearing a red, pink, and white patterned dress.

The suspect and the woman were last seen walking east on South Weller St.

If you have any information on the identity of the suspect or the woman, call the Seattle Police Department homicide tip line at (206) 233-5000. 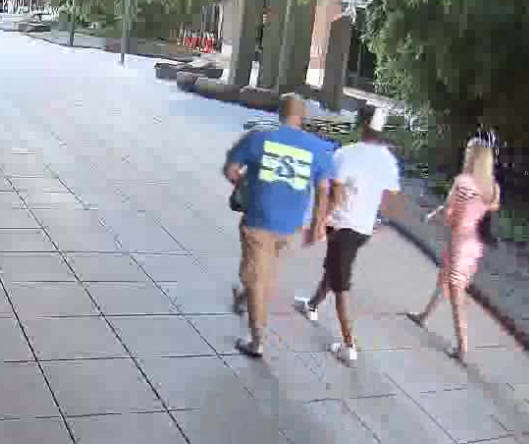