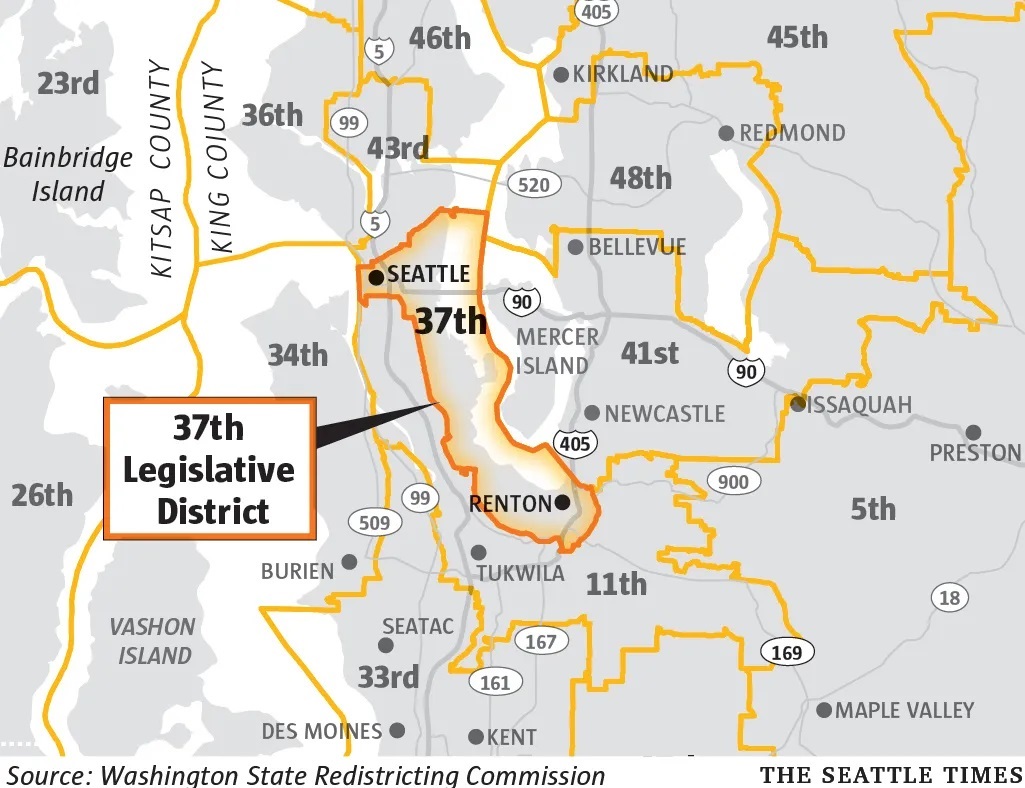 About fifty people attended the meeting and prompted discussion about issues ranging from gun control to the creation of a state income tax.

In January, the state House passed a bill to reduce state car tab taxes after voters agreed in 2016 to raise it in order to help fund Sound Transit’s light-rail and bus expansion.

Framed as a way to balance inflated car tab calculations, House Bill 2201 will cost Sound Transit $780 million in direct revenue and up to $2.3 billion in added debt service from increased borrowing.

The bill, according to Sen. Saldaña, could minimize the financial burden of car tab taxes for low-income drivers.

“For some folks, particularly if you just invested in a new car so that it does have better mileage, they’re seeing a large increase in their car tabs…and that’s a real burden for low-income folks,” Sen. Saldaña said.

Sen. Saldaña said that she sympathized with advocates who have expressed concern that the loss in revenue could create project delays or water down the voter-approved transit plan.

“We need to get it built as fast as we can,” Saldaña said. “If we start delaying, we know that things that will get cut.”

Earlier this year, the state was estimated to bring in $1.3 billion more in taxes than expected through 2021 – enough to pay for cuts in state property taxes.

Last year, lawmakers raised property taxes by roughly 81 cents per $1,000 in assessed value to fund the state’s plan for meeting the state Supreme Court education order known as the McCleary plan. The plan is expected to pump $7.3 billion into the K-12 system in the next four years.

Washington is one of nine states without a capital gains tax.

If the state is forced to contend with a downturn in the real estate market, Rep. Santos said that it should be prepared to create a capital gains tax to make up for lost revenue.

“Even though we have seen this enormous, positive economic revenue forecast recently, it’s not sustainable,” Rep. Santos said. “It’s not sustainable because it’s based on the ups and downs of what the valuations of our properties may be. We’re living in another bubble and that bubble is going pop and we’re going to be right back where we’ve been unless we come to grips with something that’s more rational and more sustainable.”

Capital gains tax proposals have seen repeated defeats in the Legislature in past generations. House Bill 2697 is latest iteration this year.

The state’s constitution does not include a provision banning income taxes, but a 1930 amendment provides, among other things, that “all taxes shall be uniform upon the same classes of property.”

The state supreme court has held that income is subject to ownership and thereby a form of property taxes—which must be applied at a flat rate under the constitution.

People attending asked the three lawmakers whether the Legislature would pass new gun control measures in light of the recent mass shootings across the country, including last week’s mass shooting in Parkland, Florida.

A state House committee approved Senate Bill 5992, that would ban bump stocks — trigger devices which allow semi-automatic rifles to fire more rapidly like those in the Las Vegas mass shooting in October.

The ban would make it illegal for anyone in Washington to manufacture or sell bump stocks beginning July 1. By July 2019, it would be illegal to own or possess a bump stock in Washington.

For Pettigrew, gun control will only be possible once voters get organized.

“We’re going to have to go district by district and get the support of all those folks in those districts that will actually see and be willing to give the courage necessary for their Senators to vote for some impactful legislation,” Rep. Pettigrew said.

Sen. Saldaña said gun control is a bipartisan issue that will require statewide conversations between all sides of the debate.

“If we stay polarized and we’re only listening to ourselves, we’re never going to change,” Saldana said. “We have to have conversations with people who are NRA members.”

For Sen.Saldaña, getting voters involved and civically engaged in the gun control debate will ultimately encourage legislators to come to a solution — including in the 37th district.

“People that start in the 37th don’t always stay here,” Sen. Saldaña said. “What if they had their first positive experience engaging with democracy here? That way, when they go to vote, they know, ‘I’m going to get involved.’ Those are going to be the way things have to happen change the way things happen in Olympia.”