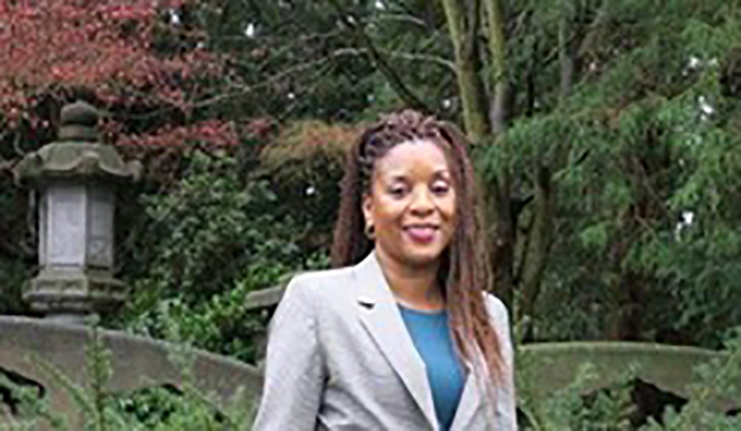 Phyllis Porter has seen purpose in representing her community since childhood.

“You are ultimately responsible for you and your own,” her mom always told her. “When you have a problem, seek solutions and share the results with your brothers and sister and all those that are affected by the answer.”

Porter is joining the city council race for District 2, which encompasses the Chinatown International District (CID) and much of southeast Seattle, including Beacon Hill, Georgetown, and further south to Rainier Valley. Six other candidates are currently running for the same seat.

She is most recently a resident of Columbia City, but has lived a variety of places in South Seattle, from Kent to Mount Baker, and has worked as an Allied Health College Instructor teaching the Medical Administrating Assisting Program for 10 years at PIMA Medical Institute and was an Adjunct College Instructor at Pierce College teaching Business Technology Pierce College. Since 2012 she has been advocating throughout these communities through a variety of local community organizations, many of which revolve around bicycling, an issue she’d like to make clear is about more than just fitness.

“After years of working in education, I decided to take up cycling,” said Porter. “I began to see the city in ways which I had never seen it before. My eyes were opened to the dangers of South Seattle streets and especially of Rainier Avenue.”

One of the biggest dangers she took action on was Rainier Ave S., which from 2005-2014 had a total of 3,600 collisions, and in a six-month study done in 2015, Seattle Department of Transportation (SDOT) found there was on average one crash per day.

Porter sent out press releases and organized the community around various rallies to come together to demand that work be done to increase safety of the street. City Hall and SDOT heard these voices and are now working to help improve the safety of the street through the Rainier Corridor Improvement project which is currently still underway.

“There have been far too many casualties and collisions on our district’s main arterial and it happens here more than any other part of the city — another product of the systemic neglect of our neighborhood,” said Porter. “District 2 has the highest rate of casualties involving pedestrians and cyclist in the city, and we have to do more to make our streets safer.”

Regardless of the method of transportation, accessibility is an issue that Porter vehemently seeks to address. Her work in organizations like Rainier Valley Greenways and Seattle Neighborhood Greenways embrace the ability and ease of getting from ‘point a’ to ‘point b’ at the forefront of their causes, no matter where you live and how you get there. Porter also wants to lessen the necessity of having to commute so far in general through transit oriented development. For her, this means prioritizing things like placing housing closer to the light rail stations, so people can spend more time in their communities.

“In District 2 alone, a lot of people don’t have cars, so they commute by bus and bicycle,” said Porter. “There’s people that live and have to travel back and forth to Seattle, and with rent increases they have to move further out and can’t afford to move any closer.”

As a single mother and a long-time community member, Porter has seen and personally experienced the effects of increased cost of living in Seattle. Through biking and spending a lot of time out in community, she repeatedly emphasized the importance of putting people first, to work with Seattleites, the city and landlords themselves to keep people in their homes and to help those without homes find housing. For her, this means expanding “programs aimed at eviction protections, debt counseling, transportation and utility assistance, legal and job support services and short-term rental assistance.”

“We need to prioritize finding new progressive revenue streams so we can build houses right there in our own district, and have places to immediately put people who need to be housed,” said Porter.

As a long-time advocate for her community, Porter prioritizes getting directly in the community, knocking on doors and bringing people together to get things done. She’s been a large part of engaging with the community through various organizations and causes, such as through Mary’s Place and Pioneer Services, where she worked in assisting those struggling with homelessness and post-incarcerated men and women with finding employment and education. This same level of engagement was crucial in her involvement with organizations like the Rainier Beach Merchants Association, and she also served on the Rainier Beach Economic Development Roundtable. The group prioritizes connecting with local community members and businesses to learn how to make their neighborhoods safer and develop in-line with their wants and needs.

Porter is currently finishing up her Bachelor’s in Communications at University of Washington, Tacoma, a task that adds to her busy schedule but one she is willing to embrace as she also balances her candidacy. Throughout her campaign she hopes people take the time to attend events and ask questions.

In return, she asks that you too make yourself heard.

“You have a voice, we just have to come to the table.”