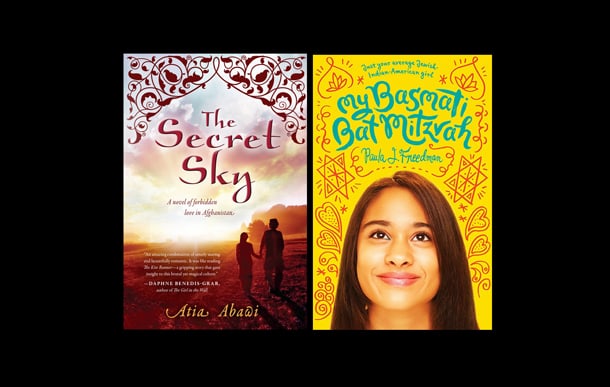 With the South Asian population one of the fastest growing immigrant communities in the United States since the passage of the Immigration and Nationality Act of 1965, it is not surprising that in the last decade, we have seen a significant number of authors writing young adult fiction about South Asian experiences. Tanuja Desai Hidier, Chitra Banerjee Divakaruni, Kashmira Seth, and Mitali Perkins are some authors writing about South Asian experiences in books for young adults. These two novels—My Basmati Bat Mitzvah by Paula J. Freedman and The Secret Sky by Atia Abawi—offer new perspectives on South Asian young adult fiction.

Freedman writes about a bi-cultural protagonist navigating Hinduism and Judaism in the United States and Abawi sets her novel in Afghanistan and tells the story of young love within a cultural context where fundamentalists enforce strict segregation of the sexes.

Freedman writes about Tara who has a Hindu mother and a Jewish father. She is almost thirteen and struggles with her bi-cultural religious identity as her bat mitzvah approaches. As if that weren’t complicated enough, Tara has the typical young teen’s problem with romantic crushes and hers is her best friend Ben O’Malley who is neither Hindu nor Jewish.

Tara’s parents give both their religious cultures equal play in her life and fusion is often embraced. Thus there are potato latkes with tamarind chutney at Diwali and geometric henna designs as she gets ready for her bat mitzvah. Her biggest challenge is finding a bat mitzvah dress that matches her style—since grey silk with punk rocker embellishments is out, she conspires with her grandmother to create an outfit that expresses who she is.

Freedman’s novel is charming with a spunky protagonist who speaks to the young urban teen’s angst. Light hearted and thoughtful, it makes for a good read and offers bi-cultural teenagers a space where their experiences are represented.

The Secret Sky is a Romeo and Juliet narrative set in Afghanistan where the star-crossed lovers, Fatima and Samiullah are divided not just by their ethnic identities—Hazara and Pashtun respectively—but also by the Taliban’s enforcement of religious fundamentalism and control of female sexuality. Abawi captures the anguish of the young lovers as their friendship evolves into romance and the families try to force Fatima to marry her friend’s elderly father to protect their honor. Enter an evil cousin of Samiullah and the narrative takes a violent and brutal turn. After many difficult moments, the young couple eventually finds their way to a new life.

Abawi’s narrative takes young readers into Afghan culture and practices and provides a nuanced view of fundamentalism, politics, and the changing attitudes of young men and women. For young adult American readers, many of whom have been raised in a post 9/11 world, this novel offers an alternative view of Afghanistan and the challenges that young people face.

Both these novels offer stories that are atypical of the mainstream young adult narrative world. For those who want culturally diverse reading options, these novels would be good choices.