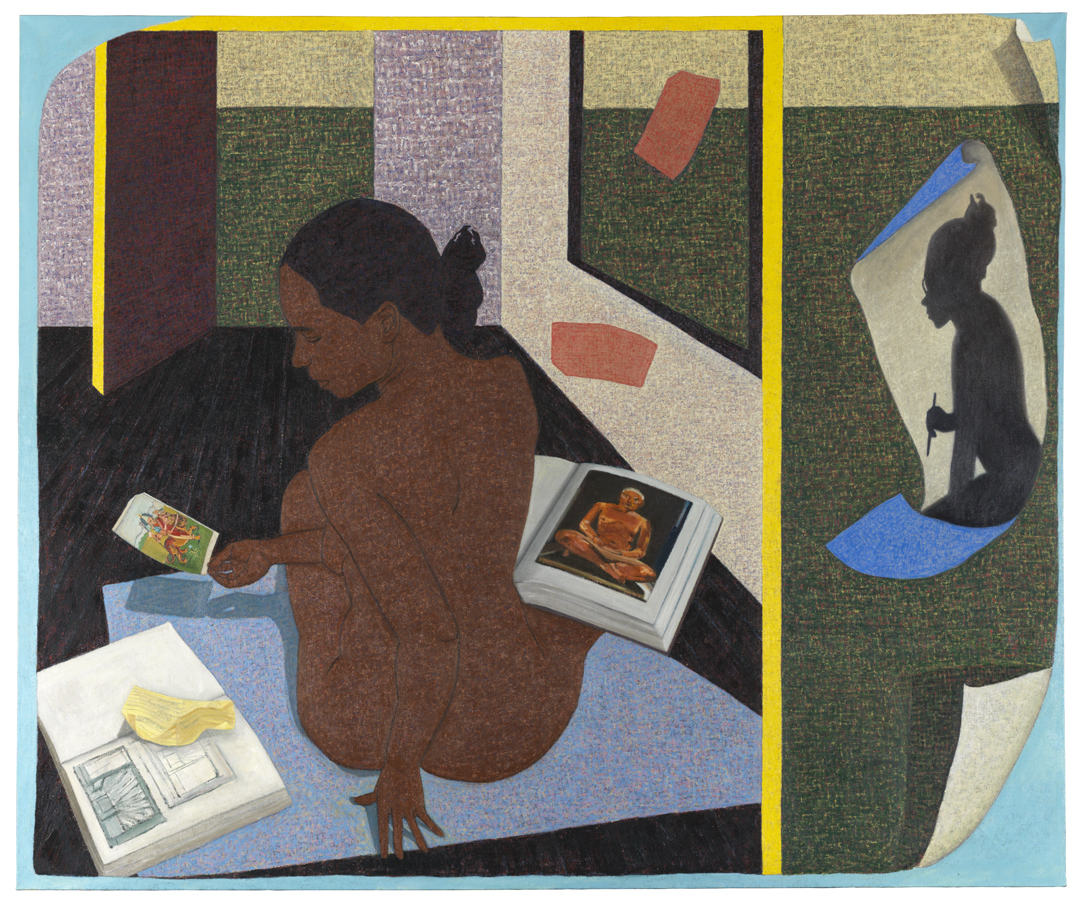 A grand exhibition has now graced us in a time where politics, identity, and xenophobia seem to be all we, as humans, think about on a regular, daily basis. Lucid Dreams and Distant Visions: South Asian Art in the Diaspora—currently on view at the Asia Society in New York City—goes further to define and elaborate meaning to these issues and to most importantly, how the effect is manifesting itself for South Asians and their communities in the United States and beyond.

Around nineteen artists, all living in the United States, come together in a concerted effort to present the various complexities of being South Asian in the Western world, and how the issues of gender, race, migration and memory come into play as prerequisites for utmost creative and artistic expression.

The exhibition is presented with an elaborate array of artworks which directs its attention not of culture and retrospect but of America as well; as Boon Hui Tan, Vice President of Global Arts and Cultural Programs at Asia Society and Museum Director states: “through a number of mediums, including photography, sculpture and video, the artists featured … challenge prevailing stereotypes and assumptions of South Asian identities in the United States today.” In lieu of India’s 70th anniversary of independence from British colonial rule, this show couldn’t have come at a better time.

The first work that comes to my attention is The Present is a Ruin Without the People (2016) by the Pakistani artist Ruby Chishti—an elaborate sculptural installation famously done with various media (recycled textiles, metal scrapes and thread just to name a few) and presented as a kind of organic, morph-like image of desolation and despair. What obviously appears to be a country-side mountain with windows and landscapes is really muted decay and abandonment due to the annals of war and strife. Most striking of all is the distinct ambient soundtrack which permeates throughout the work—as it were weaving in and out like a spirit looking for its ancestral roots.

Adjacent to it is a work entitled Emperor with No Country (2016), by Toronto-based artist Jaret Vadera, presenting subjects of Buddhist theology and science fiction in a format where facts are relayed in a document-like manner. In what appears to be either a laboratory coat or nuclear protection gear (see image), Vadera creates a map full of vivid details of boundaries, allegiances and nationalities, which he then refers them to as useless—because the map is placed on the coat of an supposed emperor—a vivid example of brutal colonialism and imperialism.

The exhibit is quite well executed: each gallery has own distinct selection of paintings, sculpture, drawings, video/audio installations and photography, each representing its own ideals, ambitions and aspirations with historically detailed vision and forethought.

New York-based artist Jaishri Abichandani, presents her work as multidisciplinary with a feminist twist, A mixed-media piece entitled We Were Making History 3 (2013) incorporates various materials such as fabric, jewels, studs, wire, for example, and creates a kind of leather whip which sculpts into faces and figures, all representative of the pro-democracy protests that took place in Cairo during the seminal Arab Spring movement. The whip and the images conveyed are symbols of present-day enslavement, human repression and absolute power.

Another artist whose work I also found quite striking is the Calcutta/New York based artist Rina Banerjee whose work, entitled Mother gathered Three or no more dirty black stones, tossed them to sky that could break what had hardened her ground and without frown or flirt of flower father like grease or butter slipped aside to free her from forty and some more grown men who held her as housewife like plant life with three or more daughters, (2017) gives the viewer her take on sociopolitical issues of migration, post colonialism, gender and race. Utilizing found objects to create an otherworldly yet traditionally based format, the image of a large female figure and its smaller companions are done in the style of traditional Indian painting, while delicate fabrics interweave amongst images that swirl and stream within and outside the two wooden panels—thus making it engaging and contemplative to look at.

Baltimore-based artist Mequitta Ahula’s work Performing Painting: A Real Allegory of Her Studio (2015) used herself as a means to depict and deconstruct the history of figurative painting as it relates to the body along time and space. What I found quite interesting are the influences of Courbet and Cezanne in the painted figures (see image) and the brush technique that are reminiscent of Seurat and Signac: short, choppy strokes in various muted colors. The work comes alive as spaces interchanged with geometric shapes, patterns and images; creating a story within a story.

Kabul 2,3,4 (2002–2007) by New York-based artist Mariam Ghani, is an elaborate display of three video screens, placed vertically and depicting the artist’s tour of the city of Kabul in three different years – travelling the same route from beginning to end. The intent is to show the progress (or digress?) of Afghanistan’s post-war reconstruction in its visual entirety—and it shows well. Images within each frame (people, buildings, shops, cars) appear quite the same, yet the viewer will soon find little nuances in the colors and shapes of things as the eyes catches them – like hope amongst all the rubble and ruin, however ambiguous it may appear or seem to be.

Another video installation, Don’t Hurry, Don’t Worry (2010), is a contemplative work based on the artist’s family and their time together—images that call on “notions of intimacy, loss and the passage of time.” In the 45 or so minutes, the viewer gazes at different intervals: one of the past, the other of the present. Whether it is a family gathering over dinner, tending to an ailing grandparent or chatting with each other about “the good old days,” the visuals become somber and melancholic or happy and nostalgic—reading into what each of the persons shown are trying to convey. Since these footages were captured within a six year period, its documentary style conveys an intimate surrounding—as if you were there in their presence as well.

Lastly, making my way over to the last work of the exhibition and located in a separate gallery, the work Crossing Boundaries (2015) by Pakistani artist Anile Quayyum Agha, was surely a sight to behold. In this installation, the artist used light and shadow to cast images of geometric patterns and symbols inherent in Islamic mosques, but more than that, the work speak of “the often alienating and transient position of the immigrant” as well as the fact that women in Pakistan are still excluded from traditional areas of worship. A black, laser-cut steel cube (reminiscent of the Holy Kaaba in Mecca) is placed in the middle of the white painted space— a single white bulb radiates the various images mentioned, thus creating an atmospheric event within the four walls and placing the viewer in an almost contemplative and meditative state – quite impressive.

Overall, Lucid Dreams and Distant Visions: South Asian Art in the Diaspora is a most lively and provocative show not to be missed—do plan to see it soon if you can.

The exhibition will be on view at the Asia Society Museum (725 Park Avenue in New York) till August 6.