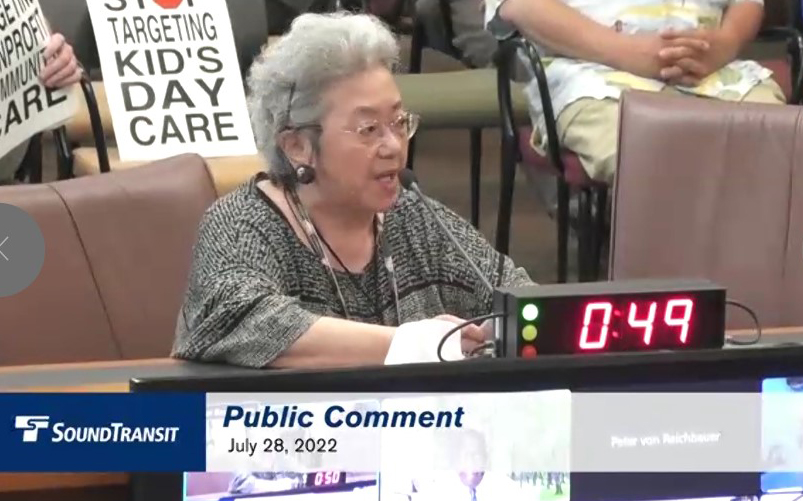 The Sound Transit Board deferred recommending a preferred location for a second light rail station in the Chinatown International District (CID) during a July 28 meeting, opting to conduct months more study and engagement with the community first.

In a motion passed July 28, the Sound Transit Board left options open for the CID station location, while solidifying its preferences for other segments of the West Seattle and Ballard Link Extension (WSBLE) rail project.

Sound Transit proposed five options for where and how to build the new CID station in its Draft Environmental Impact Statement (DEIS) for the rail expansion, released at the beginning of 2022. The options offered were either on 4th Avenue or 5th Avenue, built either shallow or deep (like Beacon Hill Station). A fifth option was a diagonal shallow station option under 5th Avenue.

In the motion passed July 28, Sound Transit pledged to further study the shallow CID station options, as well as a no-build option. Over the coming months, Sound Transit intends to “address remaining questions, minimize potential impacts and maximize community benefits through design, mitigation approaches and/or as part of broader partnerships,” according to the motion. “The study should include concepts requested by community and agency partners, including but not limited to work to define a 4th Avenue shallow tunnel option with the goal of maximizing benefits while minimizing costs and impacts.”

The Sound Transit Board will only make a final decision on station locations after the Final Environmental Impact Statement is published (anticipated in 2024). Design and construction are anticipated to start in 2026.

“We recognize the impact this project will have on the Chinatown-International District, and we will continue our conversations with community members to gather information and fully understand their concerns,” said Sound Transit Board Chair and University Place Council Member Kent Keel in a statement posted on Sound Transit’s website.

The Seattle City Council also declined to choose a preferred location for the CID route in a July 12 resolution it adopted outlining its recommendations for the station locations and routes to be studied in the final EIS.

The decision not to select a preferred alternative for the CID comes after an outpouring of concern from community organizations in the CID in the spring, raising the alarm about the impacts of Sound Transit’s station proposals. CID organizations expressed concern that the DEIS inadequately assessed the true negative impacts of the station on the neighborhood. Neighborhood stakeholders agreed that building the station under 5th Avenue in particular would be unacceptably disruptive. Sound Transit’s own analysis in the DEIS predicted business and/or residential displacements, traffic, street closures and other impacts.
During public comment before the Sound Transit Board meeting, stakeholders from the CID expressed concern about the proposed CID station.

“There will be no Chinatown if you build on 5th Avenue,” said Nora Chan, founder of Seniors in Action, in a written comment read into the record by Betty Lau.

Richard Saguin, co-owner of Trichome on South Jackson Street, said Sound Transit should not build a new station in the CID at all. “Ten years of construction on this scale will have exponentially obliterating impacts on our community and businesses that will last for decades, impacting generations,” Saguin said. “Small businesses are how many of our people survive. Harming that directly harms us.”

Rachtha Danh, who works in Property Management and Community Initiative programs of SCIDpda, also called on Sound Transit to place the new station outside of the CID, and somewhere such as the stadium district. He pointed out that the CID is a low-income neighborhood with limited green space, concentrated pollution, and sidewalks that are not ADA-accessible for the many seniors who live there – all conditions created by policymakers, like the members of the Sound Transit Board. “Do not put another project in our neighborhood that will displace and destroy our community,” Danh said.

According to Claudia Balducci, Sound Transit System Expansion Committee Chair and King County Council Chair, Sound Transit anticipates some six to nine more months of engaging with the CID community. “The challenge from here will be to make sure the agency engages openly and effectively with community members, and fully explores concepts requested by the community and our agency partners before confirming the preferred alternative for the CID, Seattle Center and other parts of the Ballard Link Extension,” Balducci said in a statement posted on Sound Transit’s website.