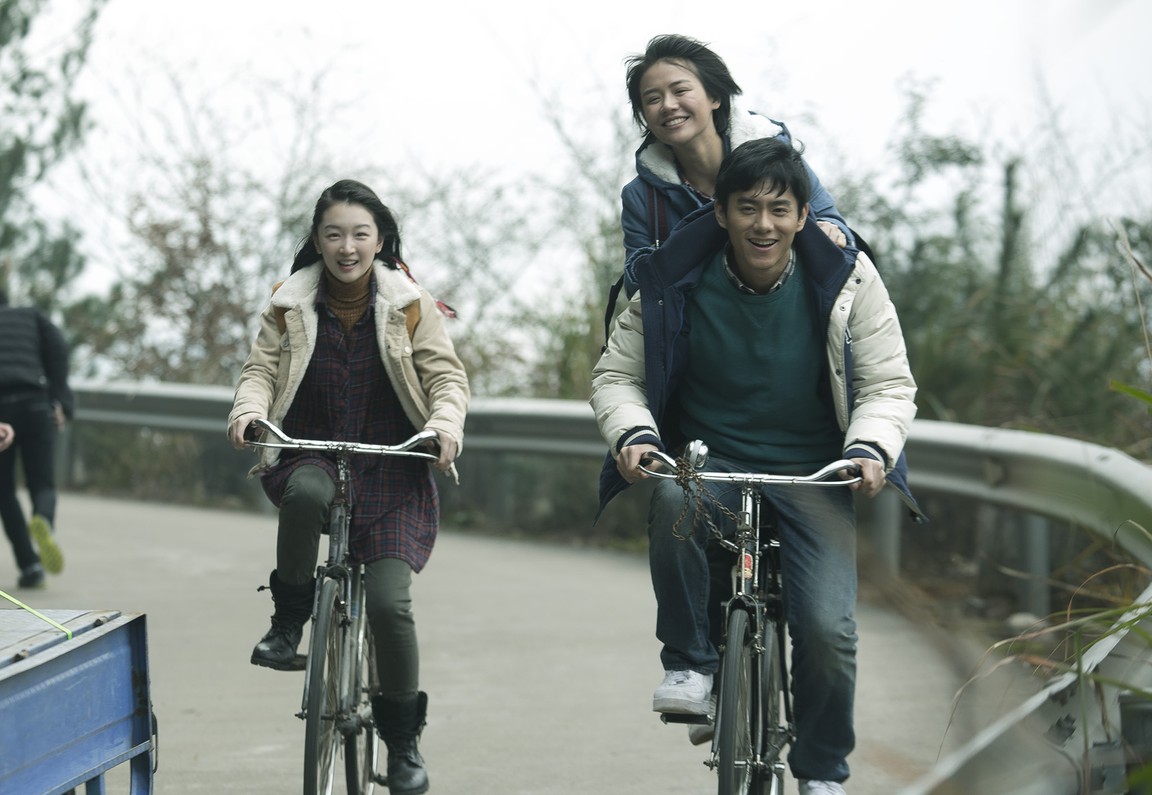 In the feature narrative, Soulmate, Li Ansheng and Lin Qiyue (or July in English) are close friends; perhaps too close, it could be argued. As 13-year old classmates in Shanghai, they develop a kinship based on mutual admiration. When Ansheng rebels against her teachers, the normally compliant July quickly follows. Fascinated by her new friend’s bold insurgency, July never questions why she’s so infatuated with Qiyue’s constant need to defy the system.

Soon, the two are inseparable. Even though they share beds and baths together (with Ansheng inexplicably obsessing over July’s breasts), the two never engage in sex. And, while Ansheng hails from an affluent, single-parent household, July’s family is more down-to-earth with a loving mother who enjoys feeding the waif-like Ansheng. Throughout their carefree schoolgirl days, Ansheng and July are devoted to their friendship. Then, they grow up and July falls in love with a man named Su Jia-ming (Toby Lee). And, so does Ansheng.

As the pragmatic July and vapid Jia-ming become more involved, the adventurous Ansheng embarks upon a life on the road, shacking up with a shaggy-haired, motorcycle-riding musician and bartending for a living. But no matter where she calls home, Ansheng always remembers to write postcards to July who has firm plans for a university education and marriage to Jia-ming.

Against the backdrop of urban China, this contemporary film explores the emotional depths of two women who come of age together. Yet, in an effort to tell their tales, Jia-ming’s has been omitted. Whether or not he was ever in love with either or both women remains a mystery, let alone what the two found so charismatic about him that they would often part over him. Or perhaps that’s the point. Maybe, Jia-ming’s role is insignificant because this film really is about two women who are soulmates.

Actresses Zhou Dongyu (The Thousand Faces of Dunjiya) as Ansheng and Ma Sichun as Qiyue  (July) made history when they tied for a Golden Horse Award for Best Actress in Taiwan. Actor Eric Tsang’s son, Hong Kong’s Derek Tsang Kwok-cheung, directs the film.

Another modern-day feature hailing from China is the noir anime inappropriately titled, ‘Have a Nice Day’. With bloody violence spewing throughout it, one could easily forget that they’re watching illustrations. Bright pigments are used to create cringe-worthy bodily injuries. And, some characters are so realistically sleazy they practically emit a bad odor. Astonishingly, every single frame was drawn by director Liu Jian over a three-year period.

The story begins at a small town construction site, when a driver for a gang, Xiao Zhang (Zhu Changlong), pulls out a knife and robs his associate of a bag containing a million yuan. Escaping with the loot, Xiao makes elaborate arrangements to pay for his girlfriend’s plastic surgery, necessitated by an earlier botched operation. But like that first flubbed procedure, Xiao’s clumsy robbery turns out to be another bad mistake.

In the one eternal night that this tale takes place, a series of blunders occurs by an overwhelming list of characters including the gang’s boss Uncle Liu (Yang Siming), a hit man named Skinny (Ma Xiaofeng) and an inventor called Yellow Eye (Cao Kou). Cousin Ann Ann (Zhua Hong) with her cropped blue hair and her long-maned boyfriend are especially funny. In one hilarious scene, they rush to the hotel where they believe Xiao is holed up so they can steal the stolen money. In the elevator, as Ann Ann reveals her desire to spend the money to go to Shangri-la, a poster suddenly appears, reminiscent of communist youth migrating to the countryside, driving tractors and embracing lambs in revolutionary camaraderie accompanied by a song.

No detail is spared to lure the viewer into the film’s contemporary setting. Although it opens with a quote from Tolstoy, its characters soon spout famous start-up names like Alibaba’s “Jack Ma,” Apple’s “Steve Jobs” and Facebook’s “Mark Zuckerberg.” Another blatant message is in the portrayal of front desk clerks who are seen napping at every late-night internet cafe or cheap hotel. But the movie’s most coherent commentary about consumerism is as clear as the city’s streets washed of human filth by the falling rain.