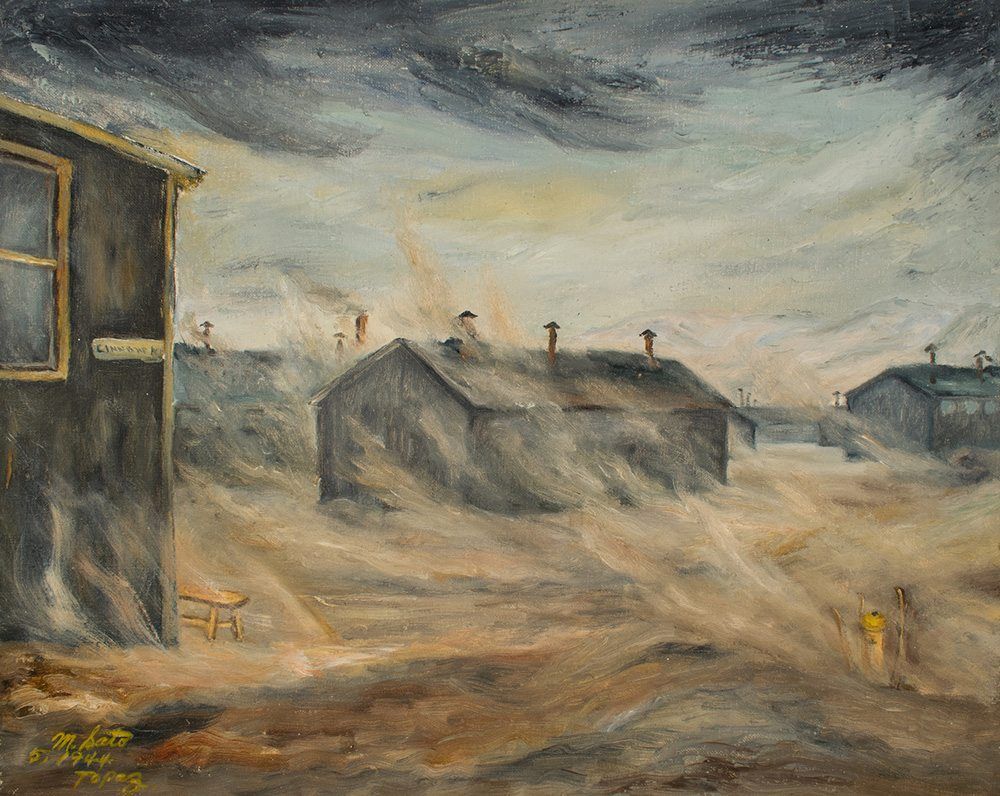 Something From Nothing: Art and Handcrafted Objects From America’s Concentration Camps is an exhibit at the Thacher Gallery on the campus of the University of San Francisco. This show’s director, Glori Simmons, said that this is “the culmination of nearly a decade of collaboration between the University of San Francisco and the National Japanese American Historical Society.” Students from Architecture and Community Design first worked on this with the objective of studying the preservation of historical sites but with a new program, the Museum Studies Program, started in 2013, a project to digitize NJAHS’s extensive collection of camp artifacts, was begun. This exhibit was organized to bring over 100 objects from NJAHS’ extensive collection to campus as a student project.

Prof. Stuart McKee’s class, Exhibition Design, utilized student projects in the designing of the logo, panels, labels and photographs, the presentation of the objects, engaging over 80 students in the construction of the exhibit. The goal was to demonstrate how much was lost by the Japanese community and how camp inmates used creative means to “remake home.” Many classes were organized such as art classes from wood carving to painting, often taught by artists and professionals.

The exhibit was extended to include artwork from contemporary artists and object which were not made in camp but were taken in, such as a wooden butsudan, circa 1918, and saved over decades. Where possible, the objects had a known history, and were part of donated collections.

In order to contextualize this exhibit, reproductions of documents such as the Executive Order 9066, President Franklin Roosevelt’s order which set in motion the incarceration of 120,000 American Japanese, were included. There is a blueprint of camp Minidoka’s construction plan, and a copy of the infamous loyalty questionnaire. But for the most part, the objects are handcrafted or painted, and it is clear that the work was not consciously made to be art. Humble objects, such as “geta”, wooden clogs, baskets, a sushi press, were made for use. The “from nothing” part becomes manifest in the materials used. Baskets were woven from onion sack material or crepe paper. Carved wooden objects such as trays, or name plates, were made from crates. Little pieces of jewelry were constructed using shells collected from the surrounding environment. Nevertheless, the objects are imbued with charm and beauty, and the intent of the makers to add their own touch is very evident.

Many of the paintings and carvings were made by people who had never been artists, but turned to those activities when the enforced idleness and isolation gave them time to fill. Some truly remarkable pieces were made, such as a model of a Japanese freighter, and lovely Japanese dolls. With over 100 objects, the collection as a whole enables the viewer to get a glimpse of life within the camps. It was a bleak landscape and the barracks prison-like, but the inmates made it somewhat bearable by using what they had or could find, to make things that helped soften the harshness.

A series of programs were also part of the exhibit, bringing together survivors, lawyers from the Korematsu case, and museum experts. Simmons said that students on campus were especially engaged, writing articles and op-ed pieces, as well as making the connection from this history to contemporary times with the recent threats to American Muslims and the controversy over DACA, providing for much discussion and a learning experience for public and students.

Update: This story has been updated with the correct spelling of Thacher Gallery.