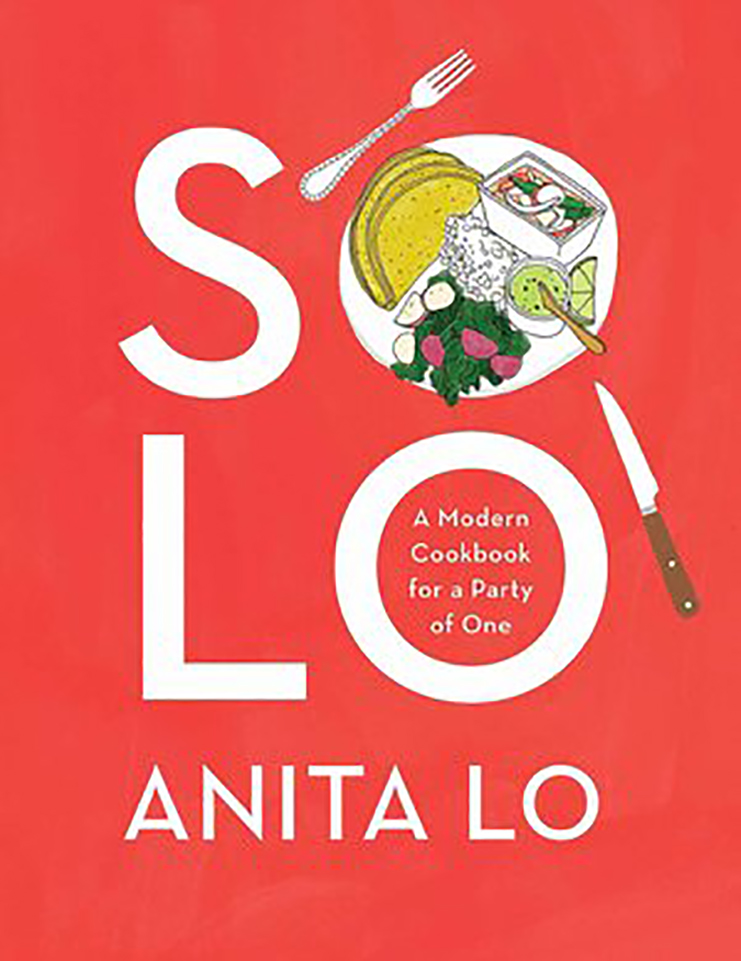 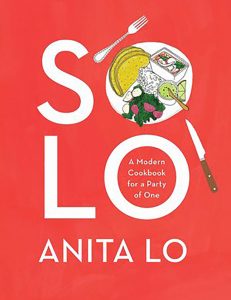 Being slow to discover the highly-touted Michelin and NY Times star restaurant anissa and its multiple awards-winning chef Anita Lo – until anissa had closed and Lo had gone on to other ventures – I mournfully scratched the names from my bucket list of fine dining possibles. So when Lo’s cookbook, SoLo: A Modern Cookbook for a Party of One, hit the stands, I was cheered by the news.

There are easily well over two dozen “cooking for one” publications currently on the market with scout’s honor promises of quick, easy, healthy, budget, seasonal, delicious, vegan, vintage, cheap, inspiring meals. Each is aimed specifically for a particular market: beginners, college, women, dogs, living alone, single man, single guy, single person. But Lo’s book captured my full attention primarily because it was written by a highly regarded Asian chef whose cookbook paid homage to the “Party of One”.

Long a serial single diner, the numeral “one” has been my sole escort on a majority of my unaccompanied, independent jaunts in the city, throughout the U.S. and travels abroad. “One” has afforded me the freedom of choice: what to eat, where to eat, when to eat, how to eat. “One” has saved me from mind-numbing deliberations too often culminating in mediocre, democratic, majority rules decision-making.

As a result of years dining “solo”, I’ve noted a radical change in restaurant attitudes toward table-for-one reservations and requests by ordinary beings. Once greeted at the door as if a carrier of bubonic plague, led to the darkest recesses of the establishment, seated behind the water station or adjacent to high traffic kitchen doors, then studiously ignored, it took steeled determination and the potential promise of a stupendous meal to continue to suffer solo abuse.

Today, however, restaurant experience for a “one” has evolved significantly. And positively. Warm welcomes, prime tables and first-rate service have become the standard modus operandi a “one” can expect in most fine dining venues of haute cuisinery. Restaurants have finally discovered that “ones” are more often than not patrons of the palate: they appreciate and reward excellent, enjoyable dining experiences.

But I digress. Anita Lo. The 50-year-old accomplished chef and multi-restaurant owner of now defunct New York City’s Rickshaw Dumpling Bar, Bar Q and annisa (a Michelin star winner for nine years), was born in Birmingham, Michigan. A second generation Chinese American, she studied French at Columbia University, including its French Language Institute in Paris. She then earned a culinary degree from L’ Ecole Ritz-Escoffier on the Place Vendome in Paris (graduating first in her class with honors); interned under Michelin-star restaurant chefs David Bouley, Michel Rostang and Guy Savo; and acquired extensive firsthand training in the noted kitchens of Chanterelle, Can, Maxim’s and Mirezi. Lo went on to garner rave reviews from then NY Times columnist Ruth Reichl, was named “One of the Ten Best Chefs in America” by Food & Wine, and “Best New Restaurant Chef” by the Village Voice. She was the first female guest chef to cook for a State Dinner at the White House, where she prepared the meal for the Obamas’ visiting guest, Chinese president Xi Jinping.

It was with great anticipation that I opened her book. I was intent on discovering the how and why a restauranteur, whose survival depended on creating multiple dishes at tables filled with multiple diners, came to care enough for occupants of tables for one that she was motivated enough to create a cookbook brimming with recipes for one.

The answer wasn’t difficult to discover. Straight off, beginning in the introduction to the book, Lo states: “I have a soft spot for the depressed, jilted single. . . also for those who are happiest on their own”. Further, she continues, “I’ve been dumped almost as many times as I’ve been in relationships” and concludes, “it seems that I’m particularly well suited to write this book.” Her sassy, no-holds-barred statement is bitingly bold and direct – startling and refreshing in an age where “making nice” is the legal tender of savvy politico-types intent on survival.

Rationale established, the next step: examining the book. The table of contents is a clue to what constitutes dishes for one that pass the dinner-is-served, come hither aroma test. A devout carnivore, I whizzed past the section on Vegetable-Focused Mains, and quickly thumbed through the segment on Noodles and Rice. With 80’s catchphrase “Where’s the beef?” ringing in my ears, I headed straight into the next three chapters: Fish and Shellfish, Poultry, and Meat. After a studied inspection, sated and satisfied that there was a plentitude of meaty nutrients represented, I ambled over to the Sides and Basics division in which lurked abundant veggie plates, salads and three kinds of stock: chicken, dashi and lobster. The final category (be still my heart): Sweets. Over a dozen temptations lay in wait to pounce on and vaporize my latest fad diet. Meyer Lemon Curd Pie, Sesame Ice Cream, Chocolate Pain Perdue – the desserts department spoke directly to my inner eater and outer size XL.

Both Asian-centered and globally influenced, the recipes include ingredients that are both familiar (e.g., Smoky Eggplant and Scallion Frittata), or may not be as well known (e.g., Bluefish, Muffaletta Style or Grilled Breast of Chicken with Banana Pepper Dip and “Fattoush”). They contain unique combinations (e.g., Skirt Steak with Beets, Poppyseeds, and Crème Fraiche or Roasted and Pickled Radish Tacos). The collection of recipes herald adventures in cooking for one that in all probability will lead to shared meals with fortunate others.

Scanning ingredients lists to determine the right amounts required for a one-and-only-meal by Lo standards was a journey down munchkin lane. Not surprising, teaspoon dominated tablespoon measures; small overshadowed large; fractional amounts ruled over pounds and ounces. Instead of a chicken, there was a leg; in lieu of a whole roast there was a chop – and a small one at that. The Lilliputian measures convinced me of how extremely serious cooking for one might be. Note to self: For those raised to save time, effort and legal tender by cooking for armies at a time, this might not be the best book for you.

The recipes are introduced with several paragraphs detailing their history, memories they conjure up, and preparation instructions that personalize the process. More than just a cookbook, it reads like a cooking journal. In addition, scattered throughout, there are brief entries that give particular insights on ingredients or preparations, like shared tricks of the trade to further guarantee your success.

Lo has included, at the back of her book, a series of pages that delve into areas that are helpful and not often found in many cookbooks. These include advice and information on: Ingredients, e.g., to buy single-portion-size ingredients steer clear of generic grocery stores and use specialty markets, like fishmongers and butchers, that can sell you exactly what you need; Cold Storage Tips, e.g., mushrooms should not be kept in plastic or they will sweat and the water will ruin them. In general, keep them in a brown paper bag or a container covered with a dry cloth or paper towel; Suggested Equipment, e.g., for small tasks a toaster with convection capabilities is highly useful and shouldn’t be overlooked; and Organizing Your Freezer, e.g., when making a large batch of sauce, freeze it in ice cube trays. Separate into single use portions, then vaccum-seal or place into ziplock bags and store in the freezer.

Anita Lo’s 236-page SoLo: A Modern Cookbook for a Party of One packs a lot between its covers. Cooking solo for one (yourself or someone else), provides refreshingly original recipes created by a master chef. The experience augurs time well spent, bound to culminate in bodacious, delicious outcomes. For those inclined to invest in SoLo, I say: Bon Appétit!