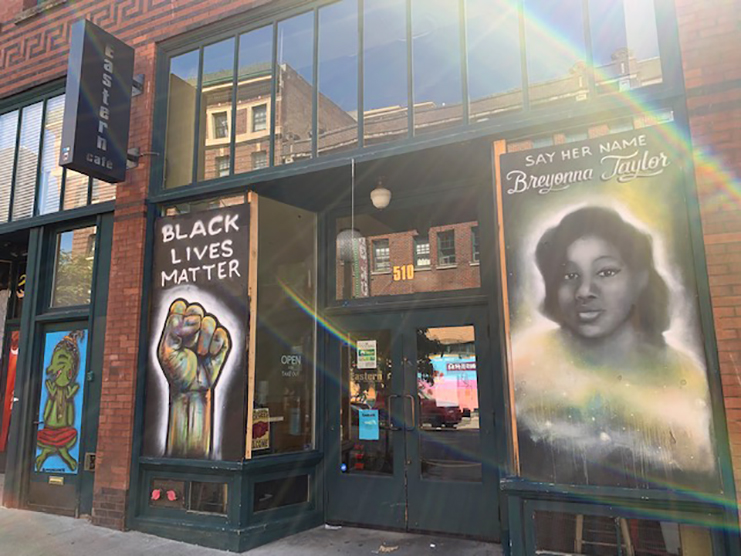 The recent wave of protests and uprisings following the murders of Black people, by police and others acting in their name, around the country and here in the Pacific Northwest, has occasioned a lot of soul-searching in AAPI communities. How pervasive is anti-Blackness among us, and how much is our own social status defined by it? What would it mean to heed calls go back into our communities and organize against anti-Blackness?

The complicity of Minneapolis police officer Tou Thao in the killing of George Floyd is one touchstone of this concern. The inspiring support of Gandhi Mahal Restaurant owner Ruhel Islam for the protests that burned down his business is another. Yet neither a sense of collective guilt nor admiration for heroic selflessness can provide a solid foundation for collectively organizing against a problem as profound as anti-Blackness.

Indeed, to question anti-Blackness requires us to consider fundamental questions about who we are and where we fit in a society historically established upon whiteness. Asking these questions gave rise to the first Asian American movement, half a century ago, which was also a movement in solidarity with protests and uprisings for Black liberation. As this precedent demonstrates, the development of a critical racial consciousness is not enough, in itself, to eradicate anti-Blackness within and outside AAPI communities, but without it, such efforts will be small and unsustainable.

The opposite of the model minority

As Karen Ishizuka demonstrates in her invaluable oral history, Serve the People, the 1960s-1970s Asian American movement had multiple origins. As Warren Furutani told her, “it seemed like all of us came to the same threshold in history and stepped over simultaneously” — a feeling that might be familiar to you from the past few weeks.

Many organizers came out of the civil rights and antiwar movements. In supporting Black protests against white racism, and in opposing a U.S. war in Vietnam in which they were treated as “the same race as the enemy,” these organizers began to question their position in U.S. society. Inspired by and aligned with the rise of Black Power movement, they defined a new “Asian American” identity in solidarity with Black, Latinx and Native struggles in the U.S. and with “Third World” liberation across the globe.

The idea of Asians as a “model minority” was born at the same time. The idea had precursors in Chinese American and Japanese American communities, who were aligned with liberal social scientists and a multiracial coalition of civil rights organizations oriented toward respectability politics. However, it wasn’t until the aftermath of the 1965 Watts Rebellion that the “model minority” theory became popularized, appearing in influential articles in the New York Times Magazine and US News & World Report, with one important difference.

What made the idea of the model minority suddenly popular? Although improved conditions for U.S. racial minorities and formerly colonized nations had been won through decades of militant struggle, the weaponization of Japanese American and Chinese American “success” against Black protest was a way of erasing the history of Afro-Asian liberation movements to promote a new vision of the U.S. as a benevolent antiracist and anticolonial superpower.

While model minority advocates spoke about our history, their theory wasn’t really about Asian Americans at all, except to the extent that it tried to pass off second class citizenship as a triumph of racial justice — the idea that working twice as hard to get a little less than equality was something to be grateful for. As many Asian Americans learned, the privileges of “provisional whiteness” are ultimately a trap, which can be cancelled quickly if you forget your place.

When the term “Asian American” was coined — organizers Yuji Ichioka and Emma Gee are typically credited, though it was undoubtedly a collective invention — it was explicitly an antonym to model minority theories of Asian allegiance to whiteness. As Chris Iijima put it, “it was less a marker of what one was and more a marker of what one believed” — or as Jeff Chang explained, it was “a fight you were picking with the world.” That fight was an alliance of “Third World” struggles around the globe, and the way forward, in the U.S., was to follow in the path of Black liberation.

Etymologically, you might say, the term “Asian American” begins as a declaration of solidarity.

The opposite of Afro-Asian alliance

When Bruce Lee met Jim Kelly in 1973’s Enter the Dragon, audiences knew immediately that the pairing equaled bad news for white supremacy. Indeed, Kelly’s character has to repel an assault by racist cops, who take offense to his passport and ticket to Hong Kong. The teaming of Chris Tucker with Jackie Chan in 1998’s Rush Hour was clearly an updating of this formula — if it sells, Hollywood remembers, even if audiences forget. Yet this time, Blackness and Asianness are imagined as opposites — so different that seeing them together makes you laugh.

Elsewhere, the repression of the collective memory of 20th century Afro-Asian alliance has manifested in feelings of betrayal, resentment, and willful ignorance. In the 1980s and 1990s, tensions between Korean American shopkeepers and their customers in impoverished Black neighborhoods were seized upon by a mainstream media that redefined the model minority myth as a story of hardworking, politically quiescent immigrants. These conflicts were real, but as Peter Kwong explained in “The First Multicultural Riots,” an article on the 1992 LA uprising, they were largely driven by class relations, which also pitted Korean American small business owners against Central American immigrants.

In those years, multiculturalism and diversity became central to the national self-image after the fall of the USSR left the U.S. as the sole superpower, and the category of “Third World people” gave way to “people of color.” Asian American cultural politics was energized by the increased visibility of children of recent immigrant professionals at elite universities, but Asian American identity was increasingly detached from its roots in solidarity and reduced to the celebration of cultural differences.

With the recent rise of China and India, and the rapid decline of U.S. global power, the significance of historical Afro-Asian alliances is unclear. Indeed, while critiquing the model minority is still necessary, it may no longer fully explain how the racial status of Asians has changed in relation to Black and Indigenous peoples, as discussions of antiblackness and settler colonialism have revealed.

What a new Asian American movement would look like is premature to say. Many of the groups sometimes aligned with it –Filipinos, South Asians, West Asians, Pacific Islanders, Black Asians, and others — do not always find the identification to be liberatory, and the term itself might need to be replaced.

However, like the first Asian American movement, it would likely follow a path from youth-led solidarity with high-profile protests into a grounding in longstanding community traditions of collective support. In the 1970s, organizers shifted their focus from campus protests to “Serve the People” programs in urban areas targeted for “urban renewal” (gentrification). Today, multigenerational activists are using social media to support small businesses in the ID targeted by white supremacists during the pandemic and recent protests, and thereby renewing a neighborhood ethos of collective aid identified with support for movements for Black lives.

The pandemic revealed a permanent undercurrent of anti-Asian racism in U.S. society already resurgent under President Trump, inspiring a new wave of Asian American activism, but it’s crucial to recognize that the impetus to reimagine a critical Asian American racial consciousness was not COVID-19, but Black Lives Matter.

As the first Asian American movement demonstrated, the development of such a consciousness cannot end anti-Blackness in itself. But it can remind us that no one, including Asian Americans, will be free until Black people are free, and so solidarity against anti-Blackness must be fundamental to our collective self-definition. Because without it, we wouldn’t even know who we are.