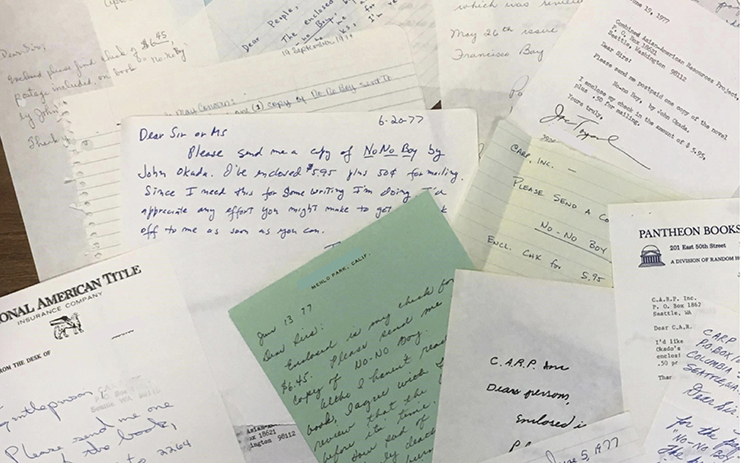 Over his long literary career, the book that Shawn Wong worked hardest to bring to readers wasn’t one of his own novels. Now it was about to be reprinted by one of the world’s biggest publishers, but Wong wasn’t happy. He had a story to tell, and he couldn’t keep it to himself any longer.

May was drawing to a close, and, for literary devotees, this year’s Asian Pacific Islander Heritage Month was looking like a big one. Penguin Classics had announced a new Asian American series, reprinting four beloved works rescued from obscurity over the last five decades: Carlos Bulosan’s America Is in the Heart, Younghill Kang’s East Goes West, H.T. Tsiang’s The Hanging on Union Square, and John Okada’s iconic 1957 novel, No-No Boy.

Asian American literature was having a moment.

In the press and on social media, coverage was glowing. New introductions for the books had been commissioned by rising literary stars — Elaine Castillo, Alexander Chee and Hua Hsu. For No-No Boy, Penguin tapped Karen Tei Yamashita, whose dazzling novel I Hotel is arguably the best book published on Asian American literary history.

Shawn Wong himself appears in I Hotel, as one inspiration for the fictional Paul Wallace Lin, who teaches himself the book business to bring the nonfictional No-No Boy back into print, and sells copies from the trunk of his green Mustang. Truth is, there are only a handful of people, living or dead, who could credibly claim to have done as much as Wong to make “Asian American literature” a thing.

But while the rest of the Asian American literary world was smiling, Wong was fuming. Penguin, he knew, had quietly chosen not to pay royalties to the Okada family, claiming that the book wasn’t under U.S. copyright — despite a 1976 registration Wong had filed for Okada’s widow, Dorothy, when he’d helped reprint it himself. Later editions, published by the University of Washington Press, had honored the copyright — and were still very much available!

On the verge of the new release, Wong doubted a multinational conglomerate like Penguin would be persuaded to change its position. So, he decided on one final act of defiance. What happened next would turn the publishing world on its ear.

Literary history from the trunk of a yellow mustang

To understand what was about to happen, you need to go back nearly half a century. When Wong was an undergrad, he once wrote, “I realized I was the only Asian America writer I knew (and I wasn’t very good).” Through his mentor, Kay Boyle, he met another one — a grad student named Jeffery Chan. Through Chan, he met Frank Chin, who dressed like a cowboy and introduced him to cappuccino. Things started moving fast.

The three of them went hunting through used bookstores, looking for evidence of other Asian American writers. They found an Asian face in a photo of Fresno poets, who turned out to be Lawson Inada. They called him up in Ashland, Oregon, and invited him to a book party in Berkeley hosted by Ishmael Reed. Soon, the shaggy-haired, disreputable quartet had named themselves CARP — the Combined Asian American Resources Project.

Within a couple of years, they befriended a who’s-who of 1970s POC literati, and dug up enough material for a groundbreaking anthology, Aiiieeeee!, published by Charles Harris at Howard University Press. They threw a conference, bringing an older generation, including Hisaye Yamamoto, Toshio Mori and N.V.M. Gonzales, together with younger Asian American writers, like Janice Mirikitani, Al Robles, Russell Leong and the IE’s own Alan Lau.

CARP didn’t invent Asian American literature, as a concept or a phenomenon, but they did more than anyone to dig up and reassemble its past. While the theory of the field they cobbled together has justifiably come in for criticism, their commitment to recovering neglected texts has never been surpassed.

And No-No Boy was their proof-of-concept, the book they celebrated most. Tragically, John Okada had died of a heart attack months before they tracked him down, but they made a pilgrimage to meet Dorothy, spread the word about her husband’s book, and when it went out of print, they enlisted the Japanese American community in a letter campaign to get it reissued by the University of Washington Press.

But UW Press asked for $5000 to print it, so they decided to publish it themselves. They pooled savings, scrounged money from Okada’s brothers, and took out an ad in the Pacific Citizen, offering a discount for advance purchases. They sold out before the first printing was finished, and ordered a second.

Orders rolled in from around the country — on company letterhead, personalized stationery, pages ripped from notebooks, and clipped ads stamped with return addresses. Wong mailed all the books himself, even when the money was short, and kept all the receipts.

He sold books out of David Ishii’s legendary shop in Pioneer Square, and, yes, the trunk of a Mustang (but he wants you to know that the real car was yellow). One day he showed up at Uwajimaya with 10 copies, thinking maybe they could be sold at the checkout stand, and Tomio Moriguchi, the grocery store’s owner, bought them all for himself and told Wong to bring more the next day.

Eventually, UW Press read about the book’s success in an article by Mayumi Tsutakawa, and offered to reprint it. Wong crankily retorted that they should publish other lost writers instead. To his surprise, they agreed. Over four decades later, their catalog of Asian American classics is unsurpassed — including No-No Boy, which they took over from CARP in 1979. It’s been in print ever since, selling over 150,000 copies.

How a community found its voice

Frank Abe was just out of college when he hooked up with Frank Chin’s Asian American Theater Workshop. Later, he painstakingly transcribed CARP’s interviews with Dorothy Okada, now archived at Berkeley’s Bancroft Library, and modeled for Bob Onodera’s iconic cover for the CARP edition. “If he was looking for a sullen and hungry young Japanese American in his mid-twenties,” Abe cracks, “that was me.”

Over the decades, the Okadas’ voices stayed in Abe’s head, as he adapted passages from the novel as dramatic monologues, worked on a documentary about John, and compiled an epic biographical essay for his recent coedited volume, John Okada: The Life and Rediscovered Work of the Author of No-No Boy.

“I don’t think that I’m alone in thinking that part of the book’s appeal is its history,” says the bookseller Karen Maeda Allman. After finding it in the late 1980s, she reread it after she began working at Elliott Bay bookstore’s original location, blocks from the novel’s setting. “Sometimes I would stand on Main St. or on Jackson St. and just think about everything that has happened in Pioneer Square in what was once Seattle’s Nihonmachi,” she recalls.

The memoirist Tamiko Nimura says that No-No Boy was the first book she bought in Seattle, from David Ishii himself, when she decided to come to UW for grad school. Later, she reread it in Wong’s class. “Twenty something years later,” she says, “I still have the CARP leaflet I found inside the book at Ishii’s store.”

When Wong decided to go public with his criticism of Penguin on the last day of May, posting an image of his 1976 copyright registration on social media, the literary community responded. The post and resulting furor went viral, and was soon being reported in the New York Times, the LA Times, NBC Asian America, and the front page of the Seattle Times.

“What Penguin doesn’t understand is that books belong to people, to families as well as writers,” Wong wrote in one post. In another, he asked, “Do they realize that nearly every Asian American writer has probably read a UW Press edition or CARP edition of the novel over the past 43 years?”

The legal issues involved are complex. No-No Boy was first published in Japan by Charles Tuttle, a company founded in occupied Japan by a staffer for Gen. MacArthur, and shipped back to the U.S. According to Penguin’s lawyers, the 1976 copyright applies only to the CARP edition’s new introduction, not the underlying work.

For Wong, the ethical questions are simpler. “Why would I use my own money to publish a book I love and not copyright it?” he asked, accusing Penguin of setting “commerce over decency” by withholding royalties from the Okada family. Abe noted that John Okada toiled for decades at often-unsatisfying jobs to support his family — sacrificing time he could have spent on them and on his literary career.

Wong has no complaints about the rest of Penguin’s series, but others have pointed out that all four texts were already available from UW or Kaya Press, another stalwart of Asian American literature. (Full disclosure: I might just have posted a comment or two about this on social media myself!) On Twitter, the poet Kenji Liu bluntly wrote, “Penguin is a literary gentrifier.”

Fortunately, a happy resolution might still be possible. Ten days after Wong’s campaign began, after the initial media coverage, Penguin finally contacted Dorothea Okada, John’s daughter. A few days later, she told the Seattle Times that the family wasn’t ready to talk, and it appears that the legal issues are not yet settled. Perhaps, in this case, no news is good news?

What’s the lesson of this story? Big picture: audiences are hungry for Asian American literary classics. Bringing out this new series wasn’t a mistake by Penguin — if anything, they underestimated how many passionate readers there are.

The way forward now is the same as when UW Press came apologizing to Wong in the 1970s, after missing out on No-No Boy. So many great writers have fallen back into obscurity, or never escaped it in the first place. Who’s going to capitalize on all this buzz, and announce some new titles?

One model publisher is—surprise!—Penguin Classics, which did a service to U.S. readers with its line of excellent Philippine texts by Nick Joaquin, José Rizal and José Garcia Villa. Abe and Cheung are currently working with Penguin on a groundbreaking anthology of Japanese American incarceration literature, tentatively scheduled for 2021.

And ironically, Penguin recently gave back its own rights to Aiiieeeee!, which Wong has taken to UW Press. A third edition, plus a website by Fickle featuring artifacts from Wong’s voluminous archives, is due out in October.

In the meantime, count on Wong to keep on making noise and telling stories.