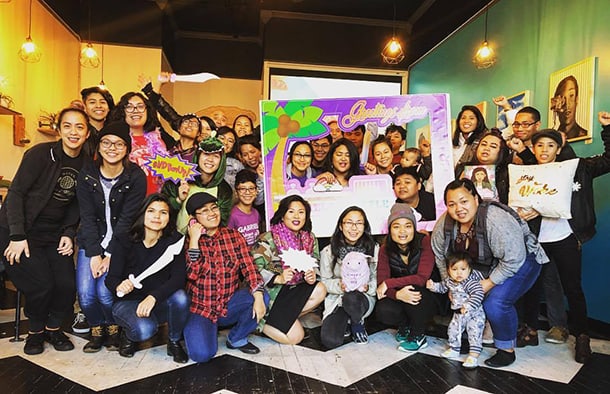 Gabriela Seattle is a member of Gabriela USA, an overseas chapter of Gabriela Philippines. It is self described as “a collective of [email protected] celebrating our multifaceted identities, revolutionary history, and rich culture…work(ing) to build a community in the Seattle area invested in educating, defending, and advocating for the human rights of Filipinas globally.”

The namesake of the organization, Gabriela Silang, was a revolutionary during the late 18th century who led a guerilla campaign for independence against the Spanish, assuming command of her husband’s troops in 1763 after he was assassinated by the colonial regime.

During the 11th anniversary celebration, several members of Gabriela Seattle presented and highlighted the work and change that the organization has helped to effect since it began.

“One thing you’ll see in the big marches and protests all over is our flag. Our presence is out there,” said Rhondalei Gabuat, chair of the organization. The organization has a strong presence in the community, made possible through the vast solidarity network it has built in the region throughout the years, Gabuat said.

Gabuat has been a member since 2009 and served in various roles in the organization before becoming chairperson. Through a friend, she discovered Gabriella Seattle while attending Pinay Summer Nights, the summer version of Pinay Autumn Nights. She was immediately drawn in by its culturally-rich program.

“What got me hooked was learning things that I couldn’t learn through textbooks, things I didn’t learn from talking to my family,” Gabuat said.

The workshop provided a connection to her roots in a way she hadn’t experienced before.
“A lot of this [Filipina] history is suppressed for us, the second generation,” she said. “We were forced to assimilate…partly because our parents wanted to improve their English through us.”

One program Gabriela Seattle facilitates to connect members to their ancestry is “exposure trips,” which bring members to the Philippines to see first-hand the conditions in their homeland.

“I hate the hashtag ‘#itsalwaysbetterinthePhilipines,” Gabuat said. The hashtag shows parts of the Philippines catered to tourists, places that Gabuat believes “gives a very small perception of what the Philippines is really about.”

Through these trips, the organization not only puts members in ground zero but also “put(s) the theory we’ve been organizing around into practice,” Gabuat said. This includes meeting with marginalized communities of lower socioeconomic status, such as the farming community, and participating in protests and rallies. For many of the members, it is also their first time in the Philippines.

“A lot of folks come back fired up because they know how difficult it is for people that have to live and breathe the situation everyday.”

Leading up to this year’s anniversary celebration, Gabriela Seattle held Pinay Autumn Nights which spanned the month of October. Free and open to the public, the program consisted of a series of workshops, a film screening around issues such as human trafficking, domestic violence, and self care, as well as a hub for networking and resources with other groups in the region doing similar work.
Gabriela Seattle also uses this event to attract new members. The organization used Filipino pop culture to draw the community to its events.

“Last year we did a play based off of a Filipino teleserye [soap opera or telenovela] called Maalaala Mo Kaya,” Gabuat said. “This is one way for us to connect to the community because they know what that show is.”