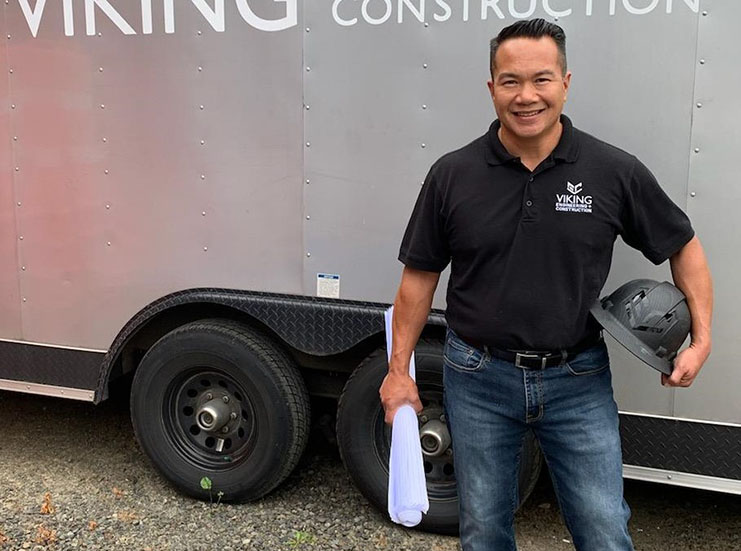 Cecil DelaCruz, the president of Viking Engineering + Construction, shared his road to success as a small business owner, with the assistance of two Small Business Administration (SBA) programs.

DelaCruz used to work as a general contractor in federal space. He noticed that the term “8(a)” was used frequently, so he looked up for more information through the SBA site.

The 8(a) program is a nine-year program under the SBA that aims to help individuals start up their businesses. Businesses that participate in the program could receive training and technical assistance to build up their abilities on entrepreneurship.

Although DelaCruz created Viking in 2002, he had to shelve it for years because of the financial incapability to keep up his everyday life. Years later in 2011, he had an opportunity to purchase a construction company from his former employer. That was the time when he and his partner decided to revive Viking.

Starting up his own company, DelaCruz said he “wanted to control his future.” He hoped to conduct business differently in such a tough market by creating a relational business model.

His experience of working in a couple small businesses earned him more knowledge on the operational aspects of running a small business. After four years of effort on developing larger projects, he applied for the 8(a) program and got accepted in 2015. He said the SBA provided a lot of training to help him lay down his foundation of running and growing a business.

“The 8(a) has provided exposure to opportunities that I definitely would never have,” DelaCruz said.

He was also thankful for the business opportunity specialist, Joseph Smetak, who was “a very integral part” of the growth of his company.

The exposure Viking has earned through the program allows them to connect with more clients and trade partners in the contracting world. A larger network of people wanted to know about Viking. Despite the company’s growth, DelaCruz constantly encourages his team to strive for the best.

“I always reiterate to our team that growth leads to exposure. And exposure, whether it be good or bad, is going to happen,” he said. “So we strive to make it good all the time.”

DelaCruz was also able to handle a larger variety of cases through the program. His team once had a client who had an emergency issue. In normal cases, the client might have to go through the process of three months including bidding the solicitation and evaluation. His team was able to negotiate directly with the agency, came up with a design and executed it, which shortened the process from approximately three months to three weeks.

Not all clients are collaborative though. There were times when DelaCruz faced clients who were “very stringent.”

“The 8(a) does have some downsides to it as well,” he said. “There has been a specific agency that’s been really tough to work with. So we typically don’t work with that as much anymore.”

The pandemic was another challenge. During the pandemic, many projects went on hold, and it has been extremely tough for not only DelaCruz, but small businesses owners in general. Not to mention the construction industry was hit badly.

“Even though we don’t do any residential [projects], they stopped because people didn’t want them in their house,” he said. “Everything stopped because the future is so uncertain… Obviously it didn’t completely stop, but the two year delay was very difficult.”

DelaCruz’s team was doing more emergency work at that time, but still it was not enough.

The program provides funds up to eight weeks costs including benefits. It is an SBA-backed loan that helps businesses keep their workforce employed during the COVID-19 crisis. The program ended last year, but small business owners in need can still get assistance from PPP loan forgiveness.

“That assistance, with the influx of additional working capital, was very helpful,” DelaCruz said. “It actually saved us.”

As vaccinations were widely distributed and many states lifted pandemic restrictions, he said Viking is getting busy again. The biggest issue right now for the company is the supply chain management.

“Doors, windows, building materials, equipment are all backordered because they are now just catching up. Maybe in six months to a year and a half, we’ll start seeing the inventory coming back,” he said. “But it’s been very difficult.”

Still, DelaCruz is working hard on his road to success, as well as being a good father to his two children. He said when he first started Viking, he sacrificed a lot of things, including his time, his health, and his opportunities to spend time with his sons. Now that he has around 50 employees and individuals that are running operations he is overseeing, he is making his kids top priority.

His younger son earned second place at a district tennis match recently. His son took it hard, and he told his son, “You can learn a lot. It’s a life lesson. These disappointments are going to be valuable in your growth.”