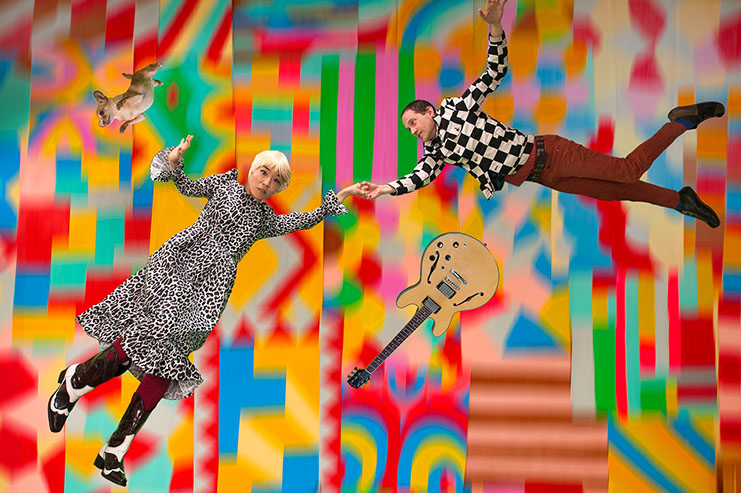 For many years, Degenerate Art Ensemble has been presenting its own brand of performance art, butoh-inspired dance, original music and multi-media visuals, and earlier this year, DEA presented a performance entitled Skeleton Flower, which focused on the challenges of struggling with depression. Now, the group members have created an offshoot musical project called Skeleton Flower, and are performing a CD release show on September 21 at the Neptune Theatre.

The new band includes the two primary members of DEA, Haruko Crow Nishimura and Joshua Kohl, along with three other musicians, Ambrose Nortness, Adam Koze and Scott Teske.  But Kohl says that Skeleton Flower is more than just a band or the performance that the band sprang from.  “Skeleton Flower is a dance-theater-music production, a Virtual Reality piece currently in post-production, a museum installation as a costume installation from Skeleton Flower will open at the Bellevue Arts Museum on September 13th, and now the music album is being released,” Kohl said.  “We love the way that an artistic idea can evolve, spin off, and inspire ideas in any medium we explore.”

In some ways, this new band is a return to DEA’s roots. “Our backgrounds are rooted in music, but ever since our early years we have explored as many other artistic territories as we could,” Kohl said. “Some avenues prove more fruitful than others, but the journey is exhilarating.”

Kohl says that he and Nishimura have long been willing to follow where their explorations unexpectedly lead. “As far as an album release goes, it has been a while since our last release,” he said, “and this show Skeleton Flower was just so inspiring on every level and the music was something we felt so proud of that we decided to flesh it out and then add a bunch of more songs to create a very special collection of songs.”

But the Skeleton Flower ensemble isn’t planning to corral the stage just for themselves. They’ve invited several other artists to perform with them on September 21, including local musician Tomo Nakayama. “We are so happy to have him on the bill as well,” Kohl said.  “He is such a refined artist and someone we have admired for a long time. We felt that opening the show with his beautiful voice would add heart to the event right away.”

Nakayama reports feeling honored to join this performance. “I was introduced to Haruko Nishimura and Joshua Kohl about 10 years ago when I sang with composer Jherek Bischoff’s orchestra,” Nakayama said, “and I’ve been a great admirer of Degenerate Art Ensemble’s work ever since.”

He specifically appreciates DEA’s creativity. “Everything they do is so vivid and full of imagination, absolutely fearless and disturbing in the best sense of the word,” he said.  “No one else in town comes close to the breadth of scope and originality of their work.”

Nakayama has performed with Grand Hallway, but plans to perform solo for Skeleton Flower’s release show.  “I love playing at the Neptune, and I’ll definitely be taking advantage of the huge acoustics of that room,” he said. “If everything works out, I might even sing backups on a couple of Skeleton Flower songs.”

Along with Nakayama and the DJ duo The Tiger Tails, Skeleton Flower has invited musical group Fruit Juice to help open the show. “We were looking for young fun wild energy that would be compatible with us and they really hit the mark,” Kohl said. “Such a wild bunch and such kind and sweet people making very original music that one might describe as neo-new wave punk.”

Kohl hopes that this CD release show will be just the start of new possibilities for Skeleton Flower. “Having an album out there puts us into contact with so many more audiences and people that we can share all of the various Skeleton Flower creations with,” he said. “There are some potential U.S. festivals and European touring on the horizon.  We shall see how it all unfolds.”