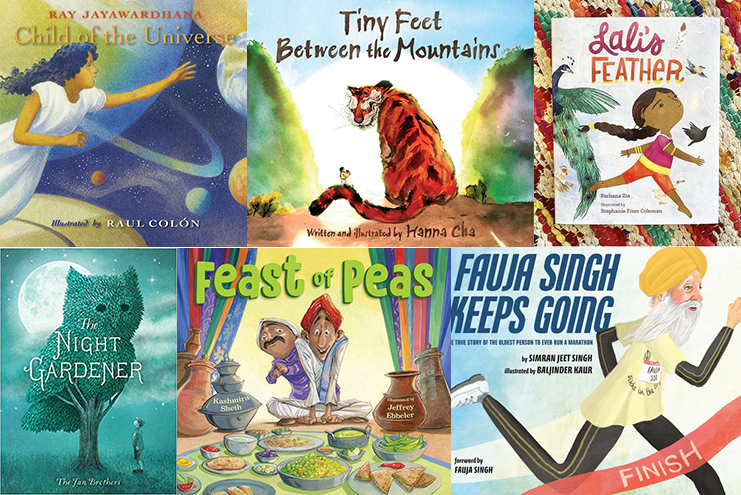 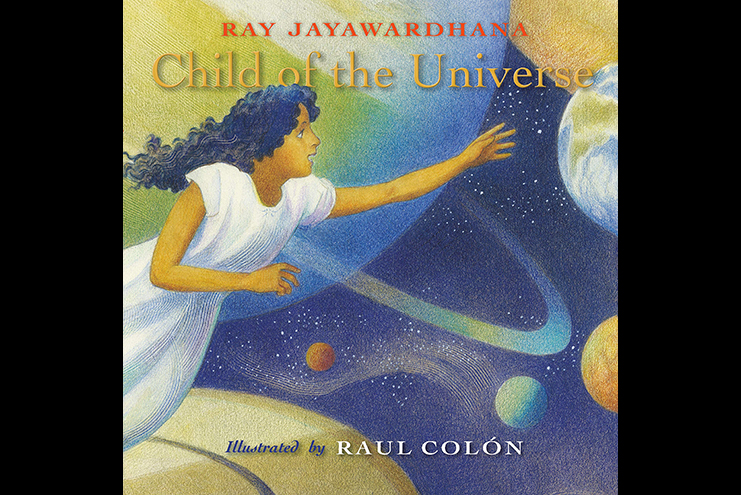 Child of the Universe by Ray Jayawardhana, illustrated by Raul Colón

This book has a fascinating concept: How is one small child related to the immense complexities of the universe? Where does the life of one tiny human fit into billions of years of cosmic evolution? Child of the Universe is the story of an astrophysicist imparting his fascination with the physical, scientific and poetic origins and diversity of the universe to a young child.

Nearly 50 years ago, Joni Mitchell sang, “We are stardust.” Carl Sagan has famously said that we are made of “star stuff.” The girl in the story is indeed the child of the cosmos. “The universe conspired to make you,” the father tells the girl. This book shows children that the girl is not alone, that they are not alone. The calcium in in the girl’s bones, the iron in her blood, the very oxygen she breathes comes from ancient stars and is within every living being. The girl is, thus, connected to a blade of grass, to the extinct mastodon, to everybody around her, and also, to the vast beyond.

Child of the Universe also shores up children’s sense of self. The father in the story tells the girl, “Just like the sun gives shine to the moon, you light up the world beyond this room.” Just the universe is all around us, children light up our world simply by being.

Colón’s imagination is just as poetic as Jayawardhana’s. His sweeping colorful flourishes and detailed cosmic entities blend into how a child dreams. That awareness shapes the words as well. This is a bedtime book that will make your child imagine that the history of the world is at their fingertips. 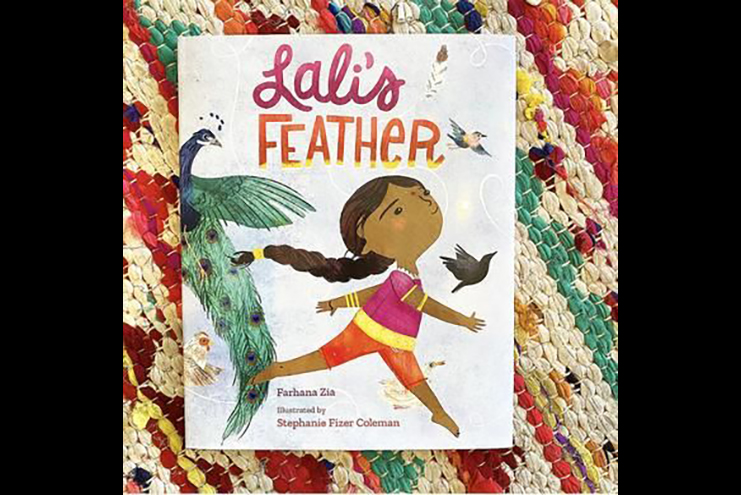 Lali’s Feather is a story of fascination with the seemingly simple, oft overlooked things in life that are given significance through our attention.

Lali finds a feather in the field and wonders if it is lost. She walks around the village and asks various birds if it belongs to them. They all pooh-pooh her suggestion and show off how important their own feathers, and thus, themselves, are. But Lali does not lose hope. She shows them that even her lowly feather is very useful and can do all sorts of things that their feathers cannot do. Lali’s wonder at her little feather make the birds sit up and take notice. They, too, realize: Wah! It’s a clever feather!” Lali’s Feather is a circular story. The next day, Lali finds a button in the field that she admires. Whose is it?

Imagination knows no bounds, and the world is full of fascinating things if you only take the time to look carefully around. Coleman’s lively art is culturally sensitive and very expressive. It depicts Lali’s expressions of concern, joy, puzzlement, and sincerity with perfect clarity, adding depth and ethos to Ali’s words. This story of imaginative thinking rewards those who value the commonplace. It shows children that even insignificant things can be worthy treasures. 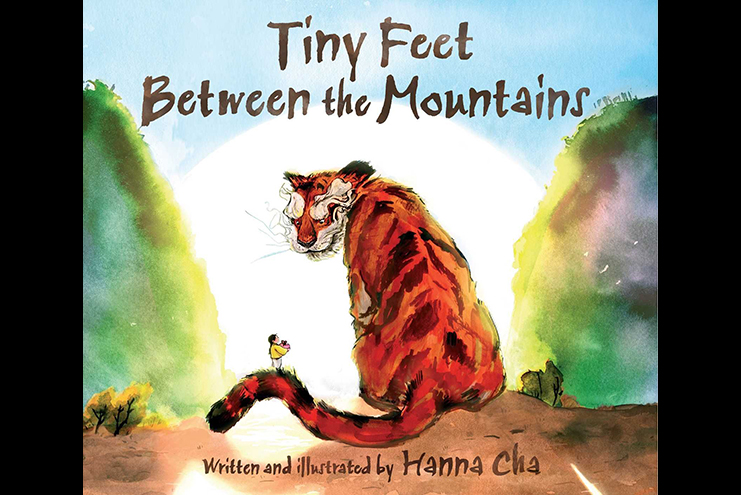 Tiny Feet Between the Mountains by Hanna Cha

This is a story that shows how everyone is capable of doing grand things; all they need is opportunity. Cha has penned a tale of such encouragement that is sure to bring comfort to those children who do not quite fit the norm of their peers and are ostracized for being different. Tiny Feet Between the Mountains conveys that if you persist and don’t give up, your courage will be rewarded.

Soe-In is a tiny child in a village full of large people. Even her name means “tiny person.” What takes others less time and less effort to achieve, takes her so much longer. Everyone in the village whispers about her, but nothing stops indomitable Soe-In. The villagers are so arrogant that they boast that they [are] bigger and more fearless than the spirit tiger rumored to protect the surrounding mountains and forest. Seo-In says nothing and goes about her day in her own way. But when calamity strikes their village, none of the villagers are brave enough to go into the mountains to explore what is wrong, except for Soe-In.

Cha’s art is evocative and redolent of emotions. The background colors are specifically muted so that the feelings take centerstage.  The story goes to show that if you seize opportunities and are brave, determined, and clever, you can achieve anything. It does not matter if others think you are incapable of doing certain things; all you have to do, is believe in yourself. 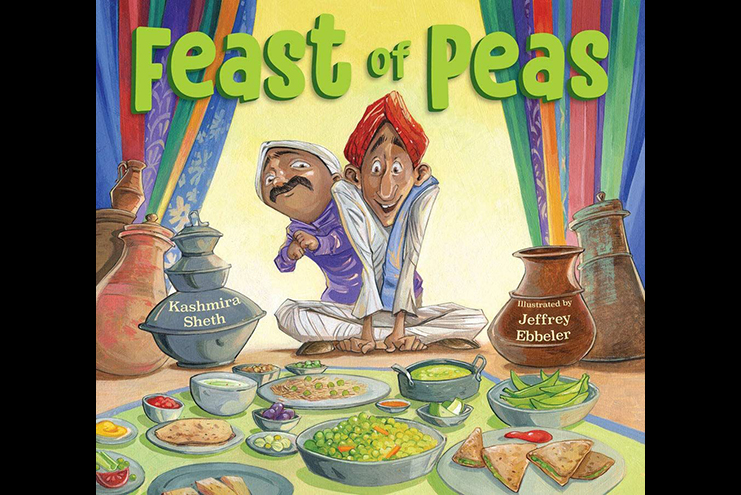 Feast of Peas by Kashmira Sheth, illustrated by Jeffrey Ebbeler

This is a generous-hearted tale of friendship and forgiveness much like Aesop’s Fables. What brings the story to life is Ebbeler’s artwork. It is beautifully researched and beautifully rendered, bringing to mind illustrations found in Indian books, such as Panchatantra Tales and Amar Chitra Katha.

Jiva is a farmer in a village in India. He works from sunup to sundown in his garden growing vegetables. But he is most excited about his peas. He showers the plants with attention, builds scarecrows and fences to keep them safe, and waits impatiently for the peas to be ready for harvest. His enthusiasm for his peas infects his close friend, Ruvji, also. However, no matter what Jiva does, his peas keep getting eaten overnight.

Jiva may be a simple farmer, but he is also clever about guarding what he loves. His innovative way of catching the thief will make children and parents alike cheer. But what will touch your hearts is what he does when he discovers the identity of the thief. 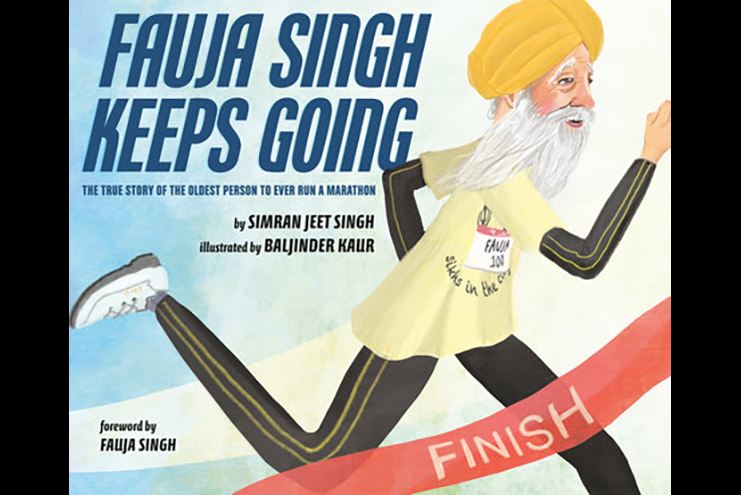 This is the true story of a man who has lived a modest life and gone on to do extraordinary things. His start in life is slow, but the belief of his mother in him is everything.

You know yourself, Fauja, and you know what you’re capable of. Today is a chance to do your best.

And she never berates him when he tries his best and fails…because tomorrow is another day to try his best. This is parenting at its finest. That faith of his mother takes this child who is weak and who did not walk till he was five years old to running a marathon when he is 100 years old. Fauja Singh is alive today and 108 and still runs.

Even from the time he learns to walk, Fauja’s body remains weak. His legs are spindly, his arms are frail, his stamina feeble. But Fauja did not listen and Fauja did not stop. He works and works and works. All that the people in his village say that he cannot do, he achieves. Fauja progresses by leaps and bounds and goes on to live a fulfilling life.

But at 81, he is alone and decides to immigrate to London to live with his children and grandchildren whom he misses very much. It is in London, his joie de vivre confounded by the dreary weather and his children’s busy lives, that he takes up running. He runs and runs and runs and discovers that life indeed is sweet and fun even in a new land in his 80s.

The exuberance of the illustrations and the joy and pride in the words will bring tears to your eyes while encouraging your children to dream of seemingly impossible achievements. In his foreword, Singh advises children: “I’d love for you to take care of yourself, try your hardest, and always choose yes when you meet a challenge.” 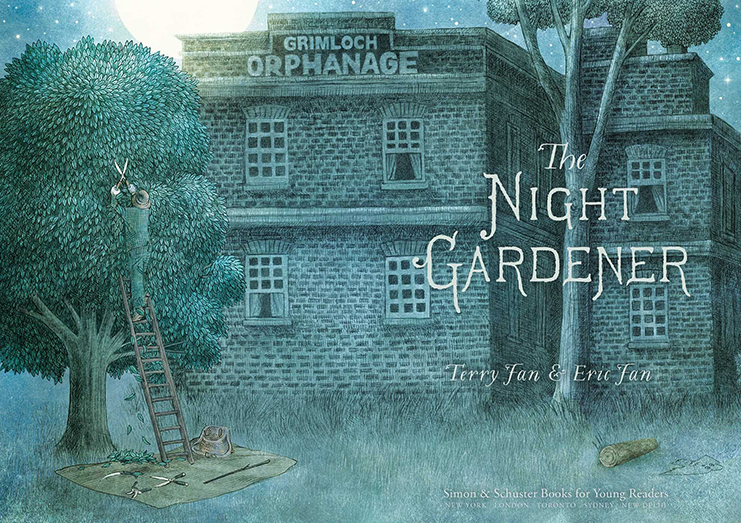 My praise for the Fan brothers’ art is going to be effusive. Combining traditional and contemporary art styles by mixing pen and ink drawings with digital techniques, the artists have created minutely detailed and utterly brilliant illustrations. You can lean back and take in the larger drawings, and then you can lean in for the intricate style and treatment of the decorative features.

By my transports of joy, you may probably have assumed that the art is everything and that the story is besides the point, but that isn’t so. The Night Gardener is a simple tale of how one person can bring such beauty to people’s life that leaves them marveling, while remaining anonymous and reaping none of the glory. It is enough to this man to bring happiness to others without needing to take credit.

The story evokes an older time when boys wore caps and jackets and men hats and suits. William lives in an orphanage, and one morning discovers a commotion on the street. He stares with wonder at the sight that greets his eye: A tree on Grimloch Lane has been magically transformed into an owl. The next day, there’s a cat. And the next, a rabbit. Something good is happening to Grimloch Lane. Trees are being converted to topiary to everyone’s delight. But no one knows who it is who is clipping the shrubs and trees into ornamental shapes. And William is determined to discover who the Night Gardener is.

This story shows little children that you do not need to always do good things only for praise and approval. You do them because they are the right things to do, whether or not they are recognized as such. But along the way, you never know who you may meet and how your life may proceed. Someone may notice you after all!