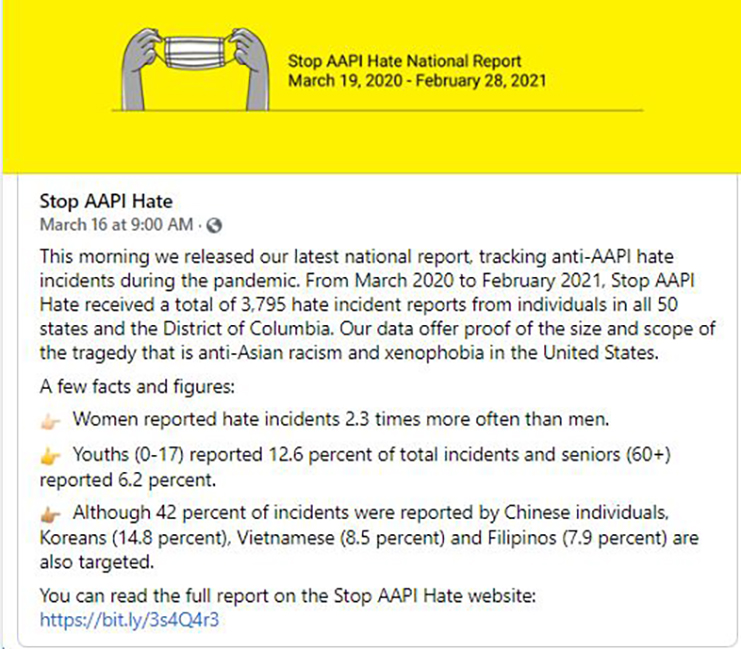 In 2008, the Seattle Times reported on a disturbing trend: “Seattle police bike officers have increased their patrols of the Beacon Hill neighborhood in response to the latest in nearly two dozen sexual attacks on Asian girls and women” since 2006.

The New York Times highlighted a list of grievances by San Franciscans in a May 2, 2010 article: “An 83-year old Chinese man beaten to death by five boys on a Bayview street and a 57-year-old woman injured after being thrown off a Third Street Muni platform. On April 16, two teenagers in Oakland assaulted Tian Sheng Yu, a 59-year-old Chinese immigrant, in broad daylight. A punch knocked him to the ground; the fall killed him.”

By 2016, the rise in crime so troubled New York’s congressional members that they sent a letter to the NYPD.  As summarized, “’Asian/Pacific Islander’ was the only category for which the percentage of victims increased for every type of crime. The data comes from yearly reports compiled by the NYPD between 2008 and 2014 that categorize victims, suspects and arrestees according to race or ethnicity.”  Although “crime numbers have not gone up,” police chief George Gascón deployed additional officers to the neighborhood to allay fears.

On Wednesday morning March 17, 2021 the first mass shooting since the pandemic made headlines. Six of the eight victims killed at the massage parlors in Atlanta were Asian women.

The response from the spokesman of the Cherokee County Sheriff Office Captain Jay Baker was that the shooter, Robert Aaron Long, “was pretty much fed up and kind of at the end of his rope” and that Tuesday “was a really bad day for him, and this is what he did”.  This did not sit well with those who endured a year of lockdowns and watched with disquiet the events around the country.

According to the Bureau of Justice Statistics, a unit of the U.S. Department of Justice, 76% of violent crimes against Asian were perpetrated by non-Asians in 2018.

When Professor Yaeji Kim reported to the NYPD that she was pepper sprayed by two men in a van on her way home in February, I was jolted by the realization that the water bottle tossed at me, the summer before the pandemic, may not have been intended for the garbage can as I’d thought.

That is small potatoes compared to being urinated on as Kathy Chen endured on her subway ride, or slugged in the face unprovoked or slashed by a knife.  Seventy-six year old San Franciscan grandma Xiao Zhen Xie was brave.  She put her attacker, half her age, on a stretcher.  (Disclosure: I bought the t-shirt Jonathan Chang designed in her tribute.)

By May 2020, we learned that of the nearly 1,500 covid-related incidents reported between March and April to the group AP3CON, 70% were from women.  The latest stats from the nearly 4,000 reports following the one-year anniversary of the pandemic concluded that women were 2.3 times more likely to have reported attacks.  Seniors came in second.

As former FBI analyst James Nolan noted in the New York Times article “Hate Crime Violence Hits 16-Year High”, “It doesn’t make [crime stats] useless that they’re underreported.  “You have to be savvy enough to look at the trend lines and see the trends. It tells you something about what’s going on.”

Long confessed to the shootings, but he told police they were not racially motivated.  He suffered from sex addiction and wanted to eliminate temptations.   In research for her 2006 book The Asian Mystique, author Sheridan Prasso found that “Asian women fetishes far, by far, exceed any other fetishes available on the internet.”

Prasso would argue that Long’s victims are inescapable from the “images, expectations and misperceptions that lead us to see Asia [Asians] as exotic, sensual, decadent, dangerous, and mysterious.”  Further “despite – and because of centuries of East-West interaction, the stereotypes of Western literature, stage, and screen remain pervasive icons: the tea-pouring, submissive, sexually available geisha girl…”

In reality, as noted in an interview with Sheridan, “Women in the developed cities of Asia today are every bit as “modern” as women in America… But because of the myths created by our images… the ideas of Asia [Asians] as exotic, sensual and decadent persist, too.”

More ironic, modern “Asia has had more women leaders in politics than America has. Asia was the first region in the world to elect a woman as head of government, back in the 1960s. The Philippines has had two women presidents already, and there are more Philippine women representing that country as ambassadors than there are American women representing America. And yet when we think about “Filipinas” we tend to think of maids, mail order brides, and nurses, rather than presidents and ambassadors!”

Taylor Zhou shares her passion for her Chinese-American heritage at MsZhou.us.  She’s a graduate of New York University.