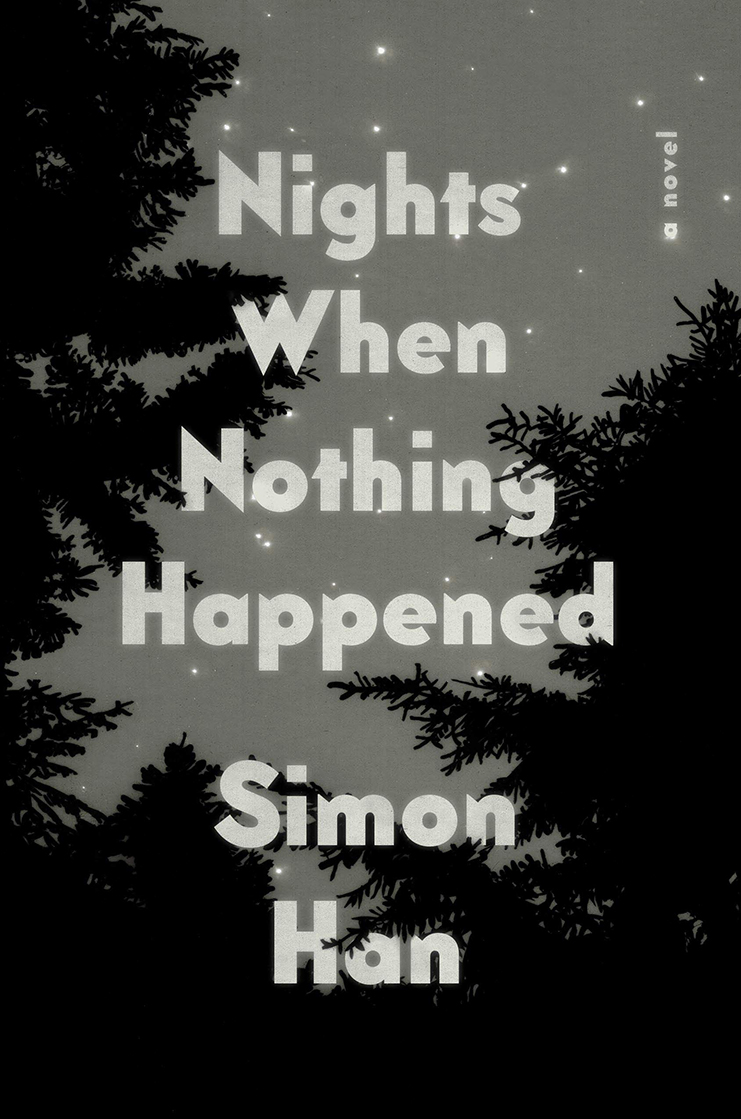 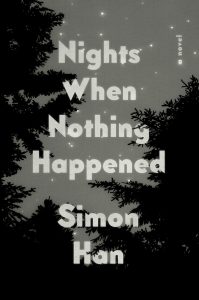 The title of Simon Han’s debut novel betrays his sense of irony. Obviously something must happen to his protagonist if he wrote 260 pages about it. Or if nothing happens to his protagonist regularly, then the single event must be cataclysmic. The beauty of Nights When Nothing Happened is that neither hypothesis is true. Han undermines our expectations regularly, creating a world filled not only with nights when things do happen, but also children who parent their families and bullies who morph into victims – and vice versa.

Han himself describes Nights When Nothing Happened as a story where the characters are “caught between realities.” The novel opens with 11-year-old Jack Cheng retrieving his five-year-old sister, Annabel, after she sleepwalks across their posh suburban neighborhood. Annabel never wakes up, but murmurs “Daddy, Daddy!” continuously as Jack carries her home – even though her Daddy is probably the last person capable of keeping her safe. Jack deposits Annabel safely in bed between their parents, delighted with his role as secret guardian: “No one woke; Jack was the only person who could see. There was a thrill to keeping it all to himself, like holding photographs of his family taken by a private detective.” But why is a five-year-old sleeping between her parents? More obviously, why is a sixth grader performing an unequivocally adult role? It’s only the first chapter, and we already sense Han’s narrative has subversion at its core.

Han reveals that Jack lived with grandparents in Tianjin until his parents, Patty and Liang, saved enough for him to join them in Texas. A familiar immigrant story, perhaps, but we quickly sense that Jack’s intuition is anything but ordinary. When he’s told Patty is already pregnant with a second child, he senses that his addition was merely an afterthought, even an obligation. This sense of un-belonging haunts Jack as he tries to assimilate into an uninterested birth family and an equally uninterested new country. Jack’s unwilling dissociation also identifies him as our protagonist – until Annabel begins sleepwalking.

Jack’s  little sister Annabel refuses to sleep away from Patty and Liang – a totally normal problem, Patty insists to the elitist teachers at Annabel’s Montessori-style preschool. But when Annabel is forced into her own room, she begins wandering in the middle of the night. Jack sees this as the perfect opportunity to prove his worth. Imagine how much Annabel will love him for keeping her safe! Imagine how proud his parents would be if they discovered how diligently he’s been protecting their favorite child! What he doesn’t know is the shameful origin of Annabel’s sleeping troubles.

Han is transitioning from what we’ve assumed would be a straightforward immigrant narrative into a murky web of half-truths and shape-shifters. Jack remembers his father used to have nightmares, but his perfectionist parents have hidden the shameful origin and severity of Liang’s sleeping disorder. Now Liang is “fine,” and they have no way of knowing that Annabel is not. As for Annabel, she claims she can’t sleep alone because she’s being bullied at school. Career-centric Patty finds it much easier to blame her laissez-faire husband for not fixing the problem than to question darling Annabel’s story.

As the novel unfolds, we discover how little of Patty’s perfect world is actually perfect. Jack is enrolled in public school so Annabel can attend the prestigious Plano Star Care, but he’s  much better behaved than his sister and much easier to be around than his father. Patty might overlook Liang’s discomfort with their American neighbors, but his domestic dysfunction is increasingly difficult to ignore: “Jack had written and illustrated his autobiography, and although he was still learning English, the pages in which his character left behind his father to come to America with his mother – complete with drawings of hamburgers he’d shared with Patty on the plane – had not appeared to be the result of an issue in translation.” As for Annabel, Patty’s favorite child is a diva at home and a covert bully at school. When Patty and Liang invite her “best friend” to their Thanksgiving party, Annabel’s violent behavior sparks a catastrophe that lands Liang in China and Patty working from her kitchen table. The power to right these wrongs, as we might have predicted at the novel’s outset, rests with Jack. But is an 11-year-old mature enough to wield it?

Nights When Nothing Happened stands out among recent debuts due to its blunt prose, perfect for a savvy preteen navigating a murky grownup world and almost equally apt for two adults puzzling over a nation whose language and customs are bewilderingly cut-and-dry. Ironically, Han spends so much time fleshing out each of the Chengs that we grow unusually attached to all of them.

Most novels – even those centered on a communal entity like a family – eventually imply one or perhaps two protagonists. I’ve chosen to highlight Jack based on Han’s recent interview with NPR, but readers could reach very different conclusions if they experience Nights When Nothing Happened for themselves. Patty, Liang, and Annabel are also developed so elaborately that any one of them might be a compelling protagonist. In fact, Han’s unusually even-handed character development almost suggests the Cheng family itself is the protagonist.

This question of “who’s what?” may seem intriguing to some readers and needlessly academic to others. Nevertheless, the novel’s (literal) final page reveals the answer is essential. The fate of our favorite family member will determine whether we finish the book feeling satisfied, disappointed, or somewhere in between. But no matter whom we choose, I can guarantee something riveting will happen to them during Nights When Nothing Happened, and not just at night. I suspect Han’s greatest gift is giving us more than we bargained for.