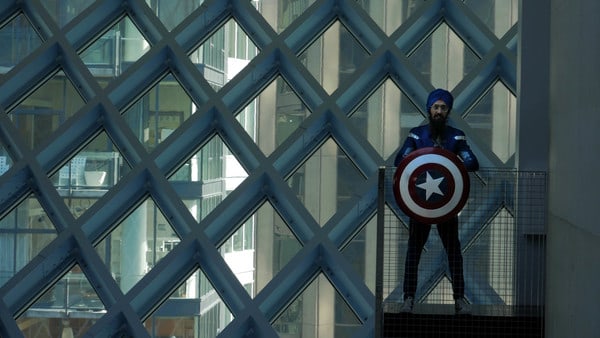 “The massive six-lane highways in L.A., the big groceries stores and so many choices of cereals available in one store, this was a cultural shock for me,” said Vishavjit Singh. Singh came to the U.S. with high hopes and wanted to continue his studies and live an American dream. However, his goal was shattered when he was treated like an outsider despite the fact that Singh was born in the U.S.

Singh was born in Washington D.C., grew up in India and came back to his birth country to continue his studies. However, he looked like an outsider.

“I was 18 years-old with a turban and thin beard; I was made to feel very out of place right away. I felt very uncomfortable. People use to call me names; raghead, genie, clown. People used to laugh in my face, and it was excruciating. The looks were like, ‘You are not from here.’ Very uncomfortable under the skin. That was difficult phase,” said Singh.

Singh was bullied while he was in the U.S. studying. Students made racially based remarks. The entire episode made Singh so uncomfortable that he wrote letters to his parent in India about the discrimination and bullying. “With this, my parents were so worried that they regretted sending me in the U.S.,” Singh said. He added that he didn’t want to be stand out from other students so he decided to cut his hair and get rid of the turban.

Eventually the discrimination and racist comments gave birth to a graphic artist. “…I started to draw a cartoon; it’s a way of expressing myself which I couldn’t do another way. I’m an introvert, so it helps me,” he added. Singh became an accidental cartoonist.

Recently, Singh was in the town to unveil his work in the exhibit at the Wing Luke Museum, “Wham! Bam! Pow! Cartoons, Turban and Confronting Hate.” This is an exhibit of his illustrations, on display through February 2019. Many people from the Sikh community gathered at the Wing Luke museum on opening night on May 4 to hear the journey of Singh’s becoming cartoon artist.

In the aftermath of 9/11, people at work and on the street gave Singh nasty looks and made him uncomfortable and scared. Singh was working as a software engineer in a company in New York.

“People started making the connection that people who have a turban and beard are committing the crime. I worked from home for two weeks and could not leave home,” added Singh. “People started calling me names – Taliban, Osama Bin Laden – and gave me nasty looks,” recalled Singh.

An editorial cartoon by Mark Fiore on terrorism inspired Singh to draw and express his concern about the discrimination through graphic art. For the first time, Singh saw a Sikh represented, and this inspired him to be a voice for the unheard section. Singh started to draw, and he posted his cartoons on a “sikhtoons” website he created. Here he gained popularity among the South-Asian community.

Despite being the fifth most largest religion in the world, many Americans don’t know a lot about Sikhism. Most of Singh’s cartoons are inspired by the news or sometimes by his own experience. “I was creating the cartoons on my own experience and stereotype remarks,” said, Singh. “I was well appreciated by South Asian section. I wanted to reach to other people.” Being in costume as Captain America helped him do that.

An illustration of Captain America with turban and beard created curiosity among the onlookers at a 2005 Comicon Festival. “People started questioning about my identity. I said them that I am Sikh Captain America, and I fight intolerance” says Singh.

Singh’s friend approached him with an idea – he would walk around New York City for a day in full costume, and they would capture the experience in photographs. The idea worked and Singh got attention.

“People began lining up to take selfies, talk to [Captain America] and find out more about him. This gave him the opportunity to talk about the intolerance and talk about his story,” says Singh.

Singh was invited to schools to do talks to kids about the diversity and intolerance. He would visit the school campuses dressed in character – complete with Captain America’s trademark shield and ‘A’ on his turban. “Represent yourself and create your story and speak for yourself and don’t hold things inside. However, you should always do whatever you feel inspired by,” said Singh.

For his exhibit at the Wing Luke Museum, Singh has drawn his life-changing episode. It has the details where he was born and the reason to come to the U.S. The cartoon also depicts his experience during the 1984 Sikh riots in India, in which Singh was a victim,as well as his journey in the U.S. and how Sikh Captain America born.

Singh is working on a graphic novel, and it is expected to release his book in the year 2019.