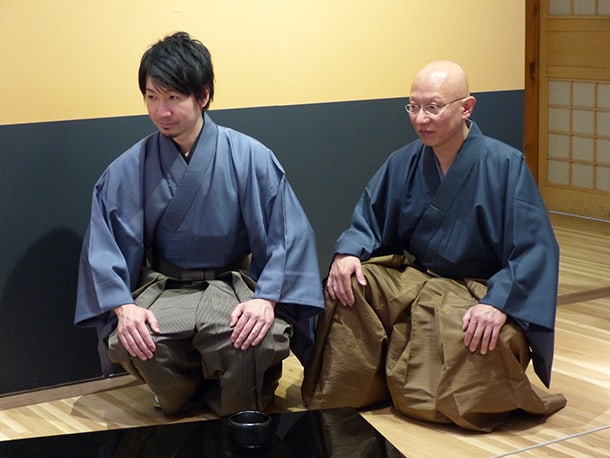 Modern life bombards us with information, demanding more of our shrinking attention spans and reducing our relationships to clicks and bytes. Everyone needs a place where they can slow down and savor the passage of time. One such place, the Portland Japanese Garden is a natural and cultural oasis. This summer the garden hosts the exhibition, Shokunin: Five Kyoto Artisans Look to the Future. Through their work, these artisans expand our appreciation of time. More than a commodity, it is an investment in the past and future of a legacy.

The Japanese word shokunin translates as “artisan,” but its meaning is deeper, alluding to layers of knowledge and discipline going back centuries and generations. Hosai Matsubayashi is a 16th generation artisan whose family makes ceramic ware in a style known as Asahi-yaki. At the exhibition’s opening, speaking for all the artisans, he addressed the question, “What is shokunin?” He defined it as more than a profession: A life dedication to making, drawing on the accumulated knowledge of past shokunin. The use of natural materials, deriving energy from nature. But even as the shokunin strives for perfection “nature always surprises us!”
“Expressing our uniqueness is not our primary goal,” said Matsubayashi. “Our work is people’s life.”

The five artisans in this show work in four disciplines: ceramics, woodworking, basketry, and lacquer. Historically, these crafts have been practiced within family enterprises: parents train children; skills, workshops and tools pass from one generation to the next.

Each family works in a specific medium and distinctive visual style. Design is driven by function before aesthetics. The shokunin values continuity and collaboration within the family and with the people who grow, forage or mine their materials; make their tools; and use the things they make.

The works in this show and the artisans who made them represent the vanguard in efforts to sustain this legacy of hand-making in an age of industrial manufacturing. Shuji Nakagawa is a woodworker whose grandfather’s practice centered on a single object: the bucket.

He recalled, “When I was a child, my grandfather was making 200 wooden buckets a month! Wooden buckets were used in every household for everything from wash buckets to rice trays. By the time I was grown, plastic had replaced them and my father had fewer than 20 orders a month. I knew that if I was unable to think outside the box, our beautiful heritage would be lost.”

Nakagawa took the shape and technique that his grandfather used to make hinoki (cypress wood) buckets and adapted them to elegant champagne coolers and graceful elliptical stools. He also works in cedar, laminating hundreds of pieces of cross-grain wood into radiating chevron patterns on large circular trays. These are displayed alongside tall buckets traditionally used to display flowers in Buddhist temples.

Basketmaker Chiemi Ogura is the only woman in the show and the only artisan not from a shokunin family. She initially trained at a school for traditional crafts, but has refined her technique largely on her own.

“Having no one to show me the way, it has surely taken me longer to get there,” she acknowledged. “The time I have spent is brief, compared with the generations of accumulated knowledge and experience available to an artisan of shokunin lineage.” Ogura works solely in bamboo, starting with whole stalks, splitting them over and over into ultra-thin strips that she weaves in delicate lace-like patterns of snowflakes and flowers. In addition to traditional baskets, she makes bracelets and rings, functional objects for a younger clientele.

In the collaborative spirit of shokunin, the artisans have created several experimental pieces combining materials and techniques from two disciplines. Keikou Nishimura applied designs in lacquer over the glaze on Matsubayashi’s wheel-thrown tea bowls, creating dramatic contrasts of color and texture. Nishimura’s oversize lacquered-wood tray supports a single Cho-raku style tea bowl by ceramicist Hirotsugu Ogawa. The mirror finish of the lacquer contrasts with the earthen texture of the hand-formed bowl, both the exact same black color, to make a striking serving piece.

Diane Durston, has been the garden’s Curator of Culture, Art, and Education for a decade. She developed the Art in the Garden exhibition series to highlight the relationship between art and nature, particularly from the point of view of Japanese culture. She hopes that this exhibition, like a walk in the garden, will encourage viewers to reflect on their relationship with time.

“This is an opportunity to slow down,” Durston said. “To experience things that are made slowly and carefully over a lifetime, multiple lifetimes. Things made over a lifetime, to last a lifetime. . . An appreciation of the past gives us a belief in the future.”

Shokunin: Five Kyoto Artisans look to the Future, at the Portland Japanese Garden, 611 S.W. Kingston Avenue, Portland OR, through July 8.