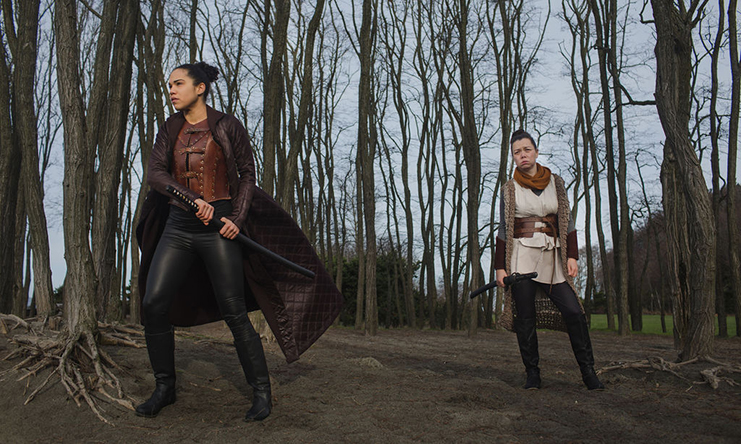 With the popularity of series such as Vikings and Game of Thrones, swordplay and themes of war and loyalty have been all the rage. Now, local theatre company Macha Theatre Works is presenting a play with a new perspective on this theme.

Maggie Lee’s play Sheathed focuses on two swordswomen who are trying to make their way in a fresh peacetime following a devastating war between their clans. Macha’s artistic director Amy Poisson reports that she selected Lee’s play because it fits in with this season’s theme, Macha: Choose Differently. “I love the classic coming of age revenge plot from a female perspective. I love that these women are complex and flawed and that they are deadly,” said Poisson, who is also directing the production.

Lee took her inspiration from a well-known filmmaker. “I really love Akira Kurosawa films, especially his samurai epics: Yojimbo, Sanjuro, and of course Seven Samurai,” she said. “There was a line in Sanjuro that stuck with me: ‘The best sword is kept in its sheath.’”

This paradox of threat and restraint captivated Lee. “This started me thinking about an issue that bothers me in how ‘strong female characters’ are typically portrayed in genre stories, because their strength is usually measured in violence, like how many bad guys can they effortlessly mow down and still have good hair and perfect makeup,” she said. “I feel like it’s way more powerful to know you could kill everyone, but that you choose not to. So when you do finally unsheathe your blade, the violence has real weight and consequence.”

Poisson finds Sheathed to be very timely. “I love the classic moral dilemmas and how apropos they are to today’s society,” she said. “I love the world-building that Maggie has done and her ability to make us feel at home, so we feel included and comfortable but also takes us on a big adventure.”

As suggested by the play’s title, one of the biggest components of this world premiere is stage combat. “I knew from the start that I didn’t want the usual fight choreography, that I wanted to try something we hadn’t seen before on stage,” Lee said. “So instead of standard stage combat, we are integrating original live music and stylized movement to capture the emotions of the fight rather than the technical moves.”

Lee was unsure about how these ideas would translate from the page to the stage. “But it’s all coming together through a collaborative process with our stage combat designer, May Nguyen Lee, movement choreographer Alyza Del-pan Monley, and composer Leanna Keith, not to mention our brave actors!” Lee said. “It’s really cool to see something that was just an amorphous feeling in my brain take shape with real bodies.” 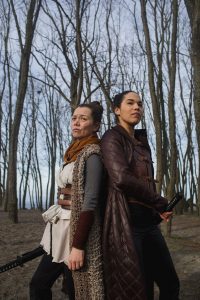 Stage combat designer May Nguyen Lee found this approach to be a rare opportunity. “Very rarely does stage combat step outside a Western or European-centric style or go beyond Anglo-Saxon weapons,” Nguyen Lee said. “With the specificity of the Asian weapons used in the play, I am very keen to decolonize stage combat by expanding what stage combat can be and to respect the rich history, techniques, and form of these weapons and styles.”

Composer Leanna Keith was excited to take on this show’s challenges. “Reading the script, I found myself completely invested in these wonderful characters and their struggles,” Keith said. “They all have their own dreams and secrets. As the composer, I get to showcase these aspects in sound, which for me is the best kind of challenge.”

Nguyen Lee is satisfied with the results of this collaborative strategy. “Everyone shares a fight ‘language’ which allows the weapons and fight sequences to be strongly character driven,” she said. “Together, we were able to build the language of the movement where the fights can be technical enough to look dangerous and the emotional arcs are conveyed with honesty with the music underscoring these sequences to heighten the action and the feeling.”

Actor Sunam Ellis, who plays the lead role of swordswoman Bala, has found strength in this approach. “Bala unabashedly goes after what she needs,” Ellis said. “She doesn’t follow protocol. She is a beer-guzzling, cranky, in-your-face woman of honor, though she doesn’t want you to believe that about her. And she can kick your butt with only her sheath. Doesn’t get better than that.”

But despite the focus on combat, Maggie Lee doesn’t neglect the issue of collateral damage in war. Actor Maile Wong plays the role of Sori, a member of the FoxFire Players, a theatre troupe within the play. “I love playing this character because of her unique perspective,” Wong said. “Unlike many of the other characters in the play, she did not participate in the Civil War. As a result, she brings a civilian perspective to the discussion of the cost of war.”

This civilian perspective is crucial in a fragile new time of peace, says assistant director Anna Ly. “The desolate yet romantic post-war world that’s trying to move on is contrasted by themes of finding your identity and learning acceptance,” Ly said, “and it’s interesting to see how each person decides to make their way through it.”
Creating a new peacetime society has its parallels to creating this new world premiere production. “Certainly the script is influenced by both the East and West, so what we have been working towards is finding the place that respects both but also lives entirely its own dimension,” Ly said. “Much like the characters in the play, we honor our roots while also finding our own separate identity.”